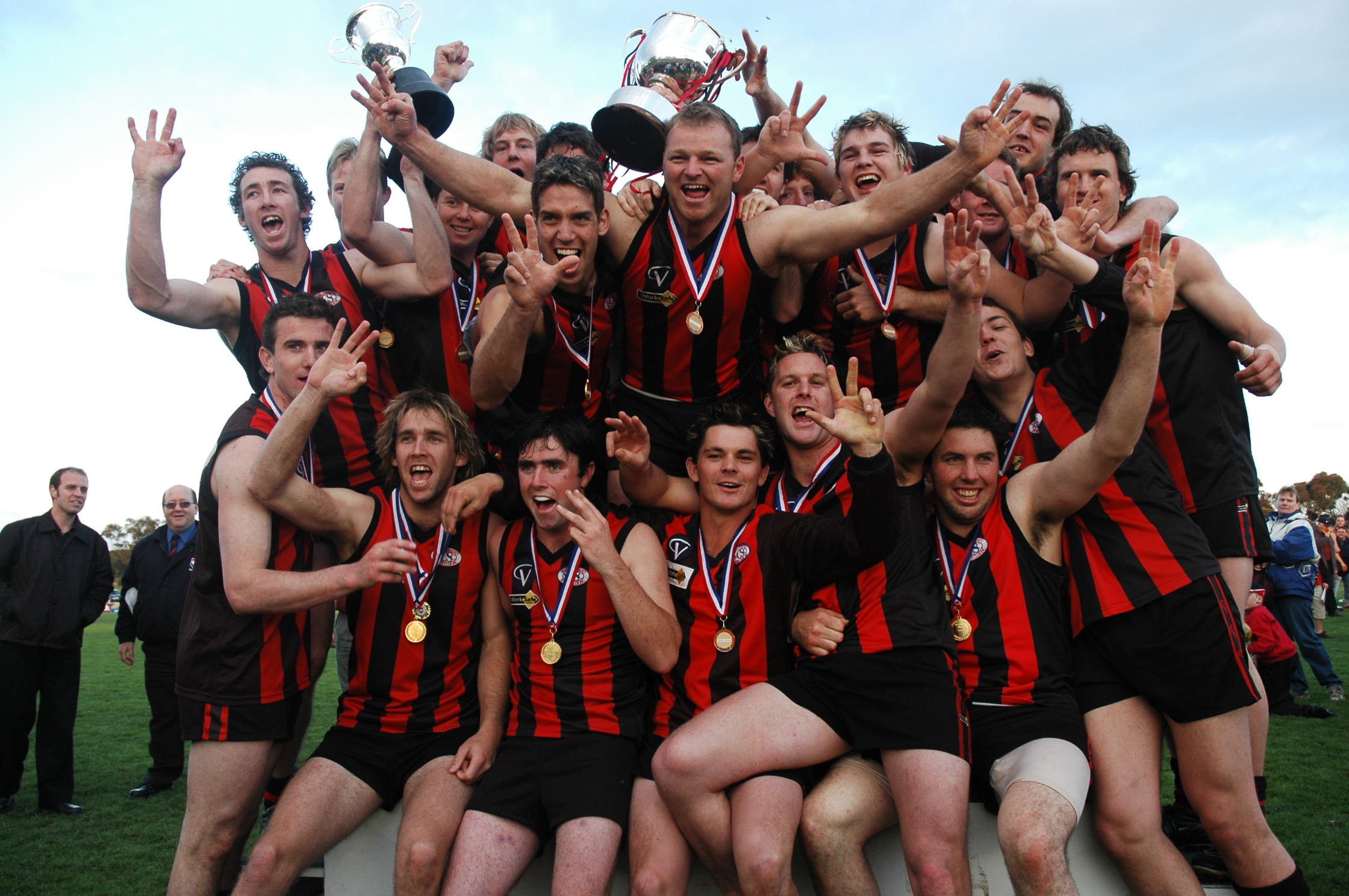 MORE than likely at this time of year during a normal football season, the Maffra Eagles would be preparing for another Gippsland League finals series.

With nine senior premierships since 2002, 13 grand final appearances in the past 19 years, and finals qualification in every season this millennium, Maffra has well and truly been a phenomenon in the recent history of Gippsland League football.

The Eagles’ have chalked up win after win, season after season, continually occupying the top few positions on the ladder.

In a minor league it’s likely a club would be kicked out for being too dominating if it made 13 of the past 19 grand finals. But in a major league? Surely Maffra is taking the proverbial.

While most Gippsland League clubs aim to make finals at the beginning of every season, making finals may well just be a given for those wearing the red and black. After all, the lowest they have finished since the turn of the century is fourth.

It seems the majority of the time, all roads to the Gippsland League premiership go through Maffra – in order to win it, you have to beat the Eagles.

Yet the Eagles’ success carries with it a large degree of intrigue.

How can a club in a dairy farming community of just 4000 people, competing against towns four times its size, continue to be so good?

How is it that a team of all one-point local players, wearing guernseys that don’t even have the numbers screen printed on, just know how to get it done year after year?

How come they never rebuild? And how have they stayed so hungry for so long?

Surely there must be more to it.

This is an attempt to decode ‘The Maffra Mystery’.

SUCCESSFUL teams are built on trust, and when a core group of around a dozen Eagles’ players have played together for the best part of 10 years, it would be reasonably assumed they have a fair amount of connectivity.

Since 2010, players the likes of Daniel Bedggood, Daniel O’Brien, David Adams, Winston Gietschen, Danny Butcher, Andrew Petrou, James Huts and James Read have played more than 1100 games between them, and have all played at least 100 games.

Add to that the experience garnered by players who have gone on to higher ranks that have come back to play for Maffra, and you have the makings of a powerful team.

Just think what a 200-game VFL player such as Sam Pleming would be able to bring to the Eagles’ line-up.

Likewise John Butcher (31 AFL games), as well as Jack Johnstone and Ed and Alex Carr, who have all spent large chunks of time in the VFL.

But experience can often just be a buzzword tossed around, as it is no good having experienced players if the majority of them haven’t played in or won finals.

And this could be where the Eagles thrive.

O’Brien, Gieschen, Bedggood, Adams and Sam Walker have all played in 30 finals, while Huts and Michael Coleman have played in at least 20.

From experience comes maturity, and Maffra has proven time and time again it knows what style to implement and what to do in any given situation.

THE Eagles’ have only had three senior coaches in the past 18 years, and all have carried names that are synonymous with Maffra – Butcher, Burgiel and Robbins.

Maffra has bucked the trend to an extent when it comes to coaches, with the three names mentioned before occupying the top job for longer than average periods of time.

While most local football coaches spend around three years at the helm, Maffra’s recent coaches have stayed on much longer.

Hayden Burgiel and Graham Robbins have coached the Eagles’ for at least five years, while current coach Wayne Butcher has called the shots for more than a decade, split across two stints.

The trio also had distinguished playing careers with Maffra. Butcher and Burgiel played more than 200 senior games and Robbins close to 100.

Having coaches who have played for Maffra would surely help in the upkeep of club identify and culture, and they would also command a fair level of respect from the playing group for what they have achieved at the club.

Interestingly, most Gippsland League clubs which have appointed either former or current players as coaches in recent years have been relatively successful.

Beau Vernon took Leongatha to the 2017 flag, and Josh Jennings and Mark Collison did the same at Traralgon in 2011 and 2015 respectively.

Rob Railton had a solid career with the Wonthaggi Blues and came back as coach to lead the Power to the 2014 grand final, while Lachlan Sim has gone deep into finals with the majority of the Moe teams he has coached.

Sale has also opted for homegrown coaches in the last few years, with Shane Fyfe and Matt Ferguson steering the ship toward premiership and numerous finals appearances.

The Magpies have continued down this path, with senior games record holder Chris Laverty now in charge.

SOMETHING that often strikes observers watching Maffra games is that there is nothing overly spectacular about the way they play.

If you were to take a photo in a game involving Maffra when the ball is in dispute, there is a good chance the frame would have more players in Eagles’ jumpers than the opposition’s.

Given it doesn’t take any ability to roll up to the most dangerous player or put in second and third efforts, these selfless attributes have basically become ingrained in Maffra’s DNA.

The result of last year’s grand final between Maffra and Leongatha was in the air at three-quarter-time, but most neutral onlookers would have surely been amazed at how minimalist the final instruction of the season was to the Eagles players.

In that situation, one might expect to see some half a dozen whiteboards with set-ups and statistics held aloft, but there was nothing of the sort. Virtually the message from the huddle was all about effort and putting in one more quarter’s worth of hard work.

Perhaps not overthinking things has been a key to Maffra’s success.

FOR a relatively small town, Maffra certainly has a decent amount of high quality sporting infrastructure.

As well as the double-storey social and corporate rooms at the recreation reserve, the Cameron Sporting Complex is one of the standout sporting facilities in the area. The complex hosts local basketball, cricket, gymnastics, hockey and junior football, and is only going to get bigger once the current $8.99 million redevelopment is complete.

Upon completion, the interior of the complex will have an expanded gymnastics floor, raised roof and two new indoor courts compatible for basketball, netball and volleyball.

Maffra’s gymnastics club has been a previous winner of National Club of the Year award from Gymnastics Australia, while the cricket club has hosted Victorian Premier matches.

Not far from the Cameron Sporting Complex is Maffra Golf Club, which is regarded as having one of the best courses in country Victoria.

A little further out of town is the highly-rated motocross which has hosted national championships, and then there is the Maffra Lawn Tennis Club, one of the select few lawn tennis clubs remaining in country Victoria.

The lawn tennis club’s annual Easter Tournament has become a staple event over the years and attracts hundreds of competitors from far and wide.

Even niche sports such as squash, racquetball, croquet and billiards are all played in Maffra, and for all we know there is probably a Maffra chess-boxing club in the pipeline.

As a town and a community, Maffra just seems to surround itself in sport. There is probably no greater reflection of this than the fact one of the main pubs in town is actually called the ‘Maffra Community Sports Club’.

It looks as though if you live in Maffra there is no escape from sport, so you might as well embrace it.

IN something that is inconceivable to the current generation, Maffra actually spent a lot of time in the football wilderness during the second half of the 20th century.

The Eagles have certainly made up for shortcomings since then, and there is probably an element of the players of today wanting to give the supporters and past players who went through the lean years plenty of premierships to celebrate as reward for their loyalty.