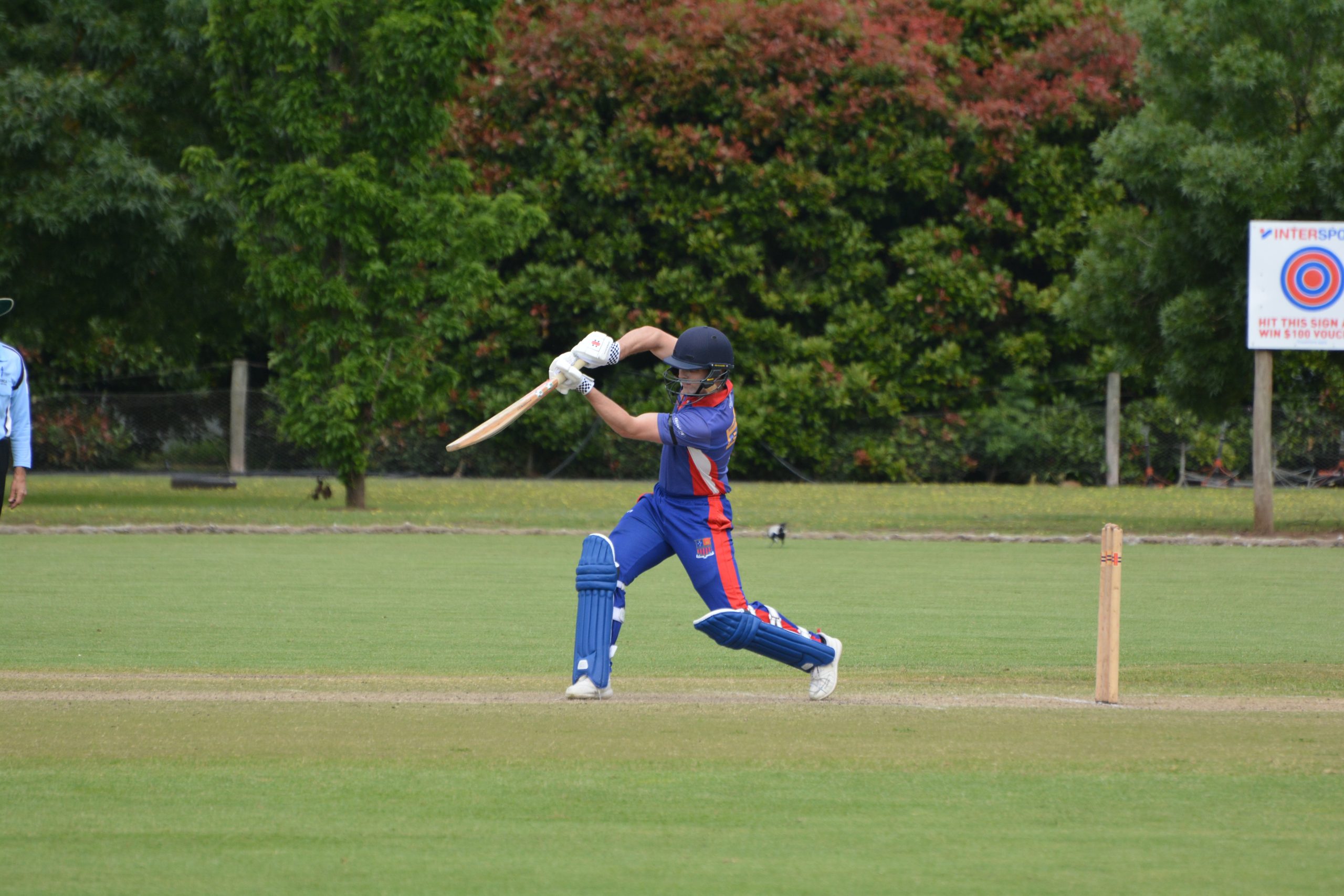 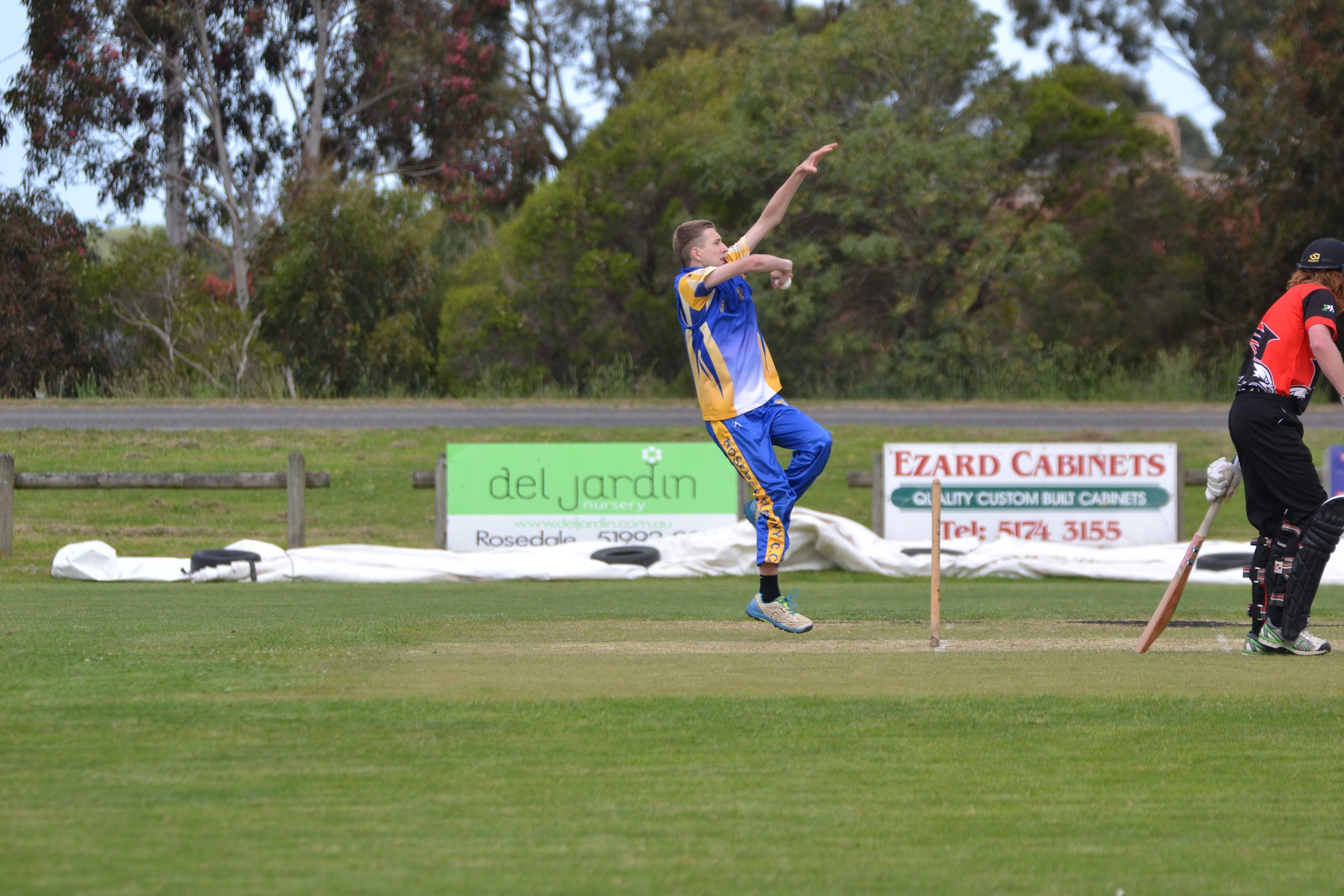 SALE-Maffra cricket’s ‘clash of the titans’ lived up to its all-star billing, with Collegians defeating Bundalaguah in a one-wicket thriller.

After electing to bat first at Colin Wrigglesworth Oval, the Bulls found themselves in a precarious position at 3-41. Collegians young gun Noah Hurley took the key wickets of Nathan Hibbins and Steve Spoljaric to get the visitors off to an ideal start.

Bundalaguah opening batsman Jason Langshaw weathered the storm, compiling a solid 47 as he and Toby O’Reilly got the game back on the Bulls’ terms.

The Bulls’ own young gun Jake Wynd came in at number six and peeled off a crucial 52, in a 90-run partnership with O’Reilly, who scored 42. The pair batted nearly the entire final block of the innings, and saw Bundalaguah post a decent total of 6-184.

Tom Morrison kept things in order with the ball for Collegians, conceding just 19 runs in seven overs and picking up two wickets.

Hurley finished with figures of 2-30 and bowled the only maiden for the innings.

The Collegians’ batting effort began in subdued fashion, with the first three batsman scratching around for a few runs before getting out. Charlie Morrison stood tall at number four, ticking along with those around him to keep his side on track.

Some handy contributions in the middle to lower order ensured Collegians took the game deep, as those on the sidelines began to count down the runs one-by-one.

Spoljaric brought out some trademark magic in his second spell, claiming three wickets and a direct hit run out to threaten to single-handedly win the match for the Bulls.

With heart rates pounding late in the day and every ball a near-death experience for those in the College camp, it came down to the final pair of Matt Foster and Tom Morrison needing to steer the side home. Foster used every ounce of his experience to remain composed under extreme heat, while Morrison, who has a senior century to his name, had the skillset to get the job done.

The master-and-apprentice combination held its nerve in a pulsating finish, with the match decided in the penultimate over.

While it was Tom Morrison who was out in the middle when the game was won, he never would have been there if it wasn’t for his older brother Charlie, who made a game high 65 earlier in the piece. The innings not only proved to be a match-winning performance, but could also be a career-defining moment for the would-be all-rounder.

Spoljaric (4-44) and Gayashan Munasinghe (2-19) finished with multiple wickets for Bundalaguah, and Lachlan Floyd was economical with 1-22 from eight overs – the only bowler in the Bulls’ line-up to be given their full quota.

STRATFORD reversed its opening game mauling, turning the tables on Boisdale-Briagolong in an impressive performance.

The Redbacks could hardly put a foot wrong with the bat, as the left-right hand opening combination of Bohdi Walker and Cormac Hassett made 48 and 56 respectively.

Taylor Tatterson’s love affair playing Boisdale-Briagolong continued, with the Stratford skipper scoring 53 batting first drop. In his past five hits against the Saints, Tatterson has scored 63, 33, 83 not out, 86 and 53.

After such a strong start by the top three, wickets tumbled as the remaining batsmen went for quick runs, to eventually see Stratford end on 8-210 at compulsory close.

Liam Hurst finished with three wickets, while Dylan Bolton and Jonny Lash each picked up two poles against their old club.

Boisdale-Briagolong leg spinner Ned Sutton took the wickets of the two openers to get the Saints back in the game.

The Saints’ batting effort saw them fall 60 runs short, with a few players getting starts without converting.

Boisdale-Briagolong threw a huge curveball in the batting order by sending opening bowler Todd Mann out to face the new ball, in the hope he could slog a few boundaries. Stratford, not to be undone, pulled a similar card by opening the bowling with Andrew Tatterson to scoot through some overs with his off breaks.

Wrist spin ended up being a successful ploy for the Redbacks, as Tom Wrigglesworth and Sam Anstee took two wickets each and returned near identical figures. Wrigglesworth took 2-25, while Anstee used his knowledge of the Stratford pitch to good effect, taking 2-26.

Seb Pendergast also chipped in with two wickets, with the yard of pace he has picked up in the off season shining through.

Hindering Boisdale-Briagolong’s chances was the absence of Toby Leeds.

SALE was too strong for Longford at home.

The Lizards fancied their chances bowling first, and when the Swans slumped to 3-36 – 28 of which had been made by Rohan Blandford – things appeared to be going to plan.

A 70-run partnership between Ben Jones and Lucas Mowat got Sale out of trouble, with the former scoring 43 and the latter 25. Jones went on the counterattack, making 30 of his 43 runs in boundaries, while Mowat knew what was required, having played a vast amount of first grade cricket in the past.

Longford fought back well and was still in the game at 6-136, but an innings of 54 not out from new Sale player Josh Granger ensured the side got as close to 200 as possible.

Poojan Katyal proved effective for the Lizards, taking 4-40 with three wickets disturbing the timber, as did coach Andrew Tyson, who took 2-34 with two maidens. Cameron Wrigglesworth also kept the run rate down, going for 28 from eight overs and picking up a wicket.

Chasing 196, Longford never really got going in its innings, as it batted out its overs to finish at 7-70. Run outs were a feature of the Lizards’ top order for the second consecutive week, with two of the first three batsman suffering this fate.

Sale bowlers all did what was needed, with a quarter of the overs bowled maidens. Ben Jones took 2-11 from eight overs to lead the charge.

MAFFRA made it two comprehensive wins to begin the season. The Eagles made light work of Rosedale-Kilmany, winning by six wickets.

Seeing something in the wicket they liked, Maffra injected the Warriors on their home deck, and found wickets at regular intervals.

Rosedale-Kilmany ticked along at 1-33, but soon found itself reeling at 5-51.

The scorebook turned into a horror story as six batsman in the middle order contributed a paltry 12 runs between them, while the innings was only marginally saved by Dylan Rowley, who made 22 batting at number eight.

Brad Scott opened the batting and managed 29, which saved the Warriors from total embarrassment, as they were skittled for 88.

Every Maffra bowler took a wicket, with Hamish Nettleton and Mitchell Bennett claiming three each.

The Eagles were enjoying winners’ drinks in relatively quick fashion, securing the points just after the half-way mark of their batting innings.

Despite falling to 2-20, Daniel Bedggood and Josh Davis saw the team to victory, putting on 54 for the third wicket and making 41 and 23 respectively.