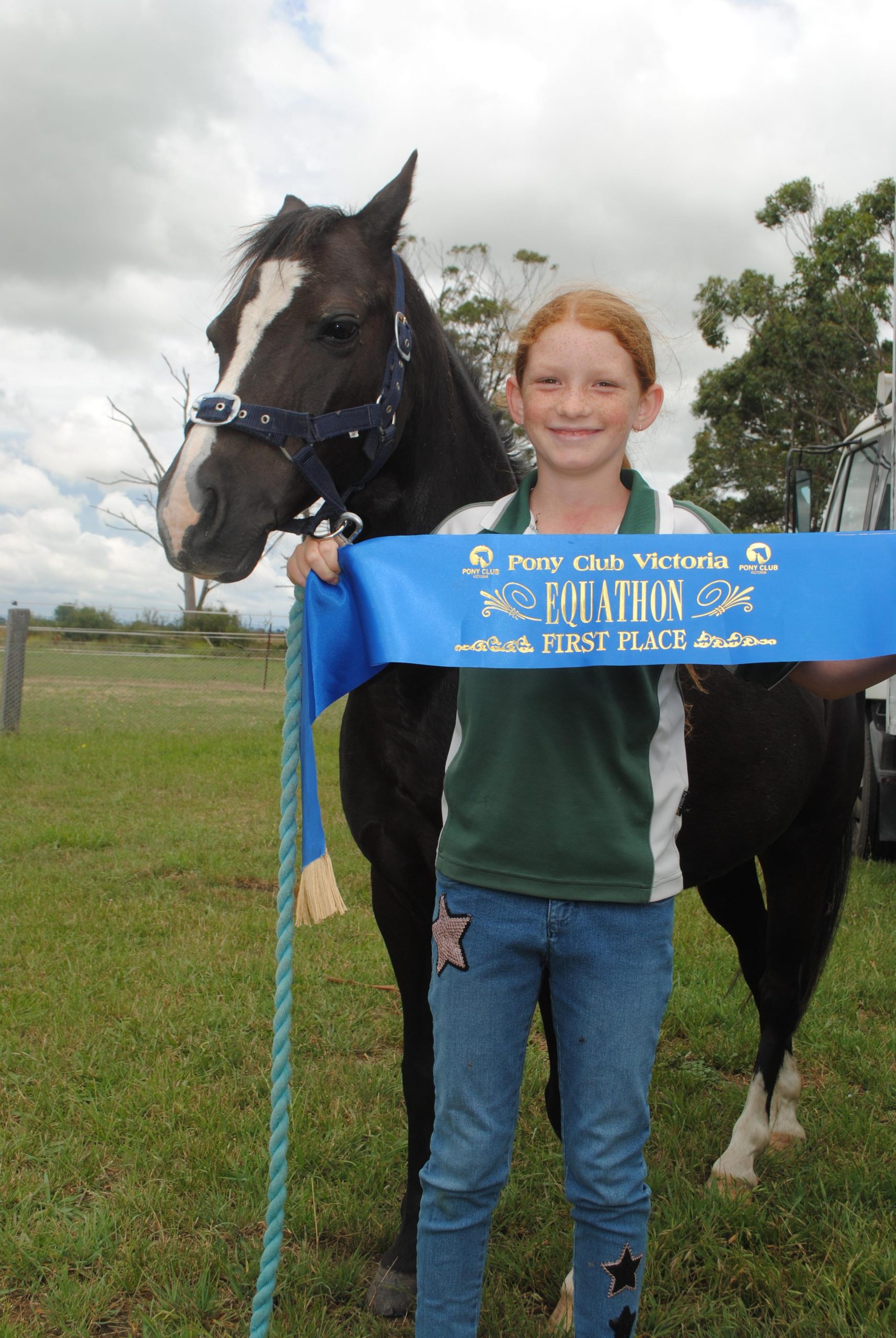 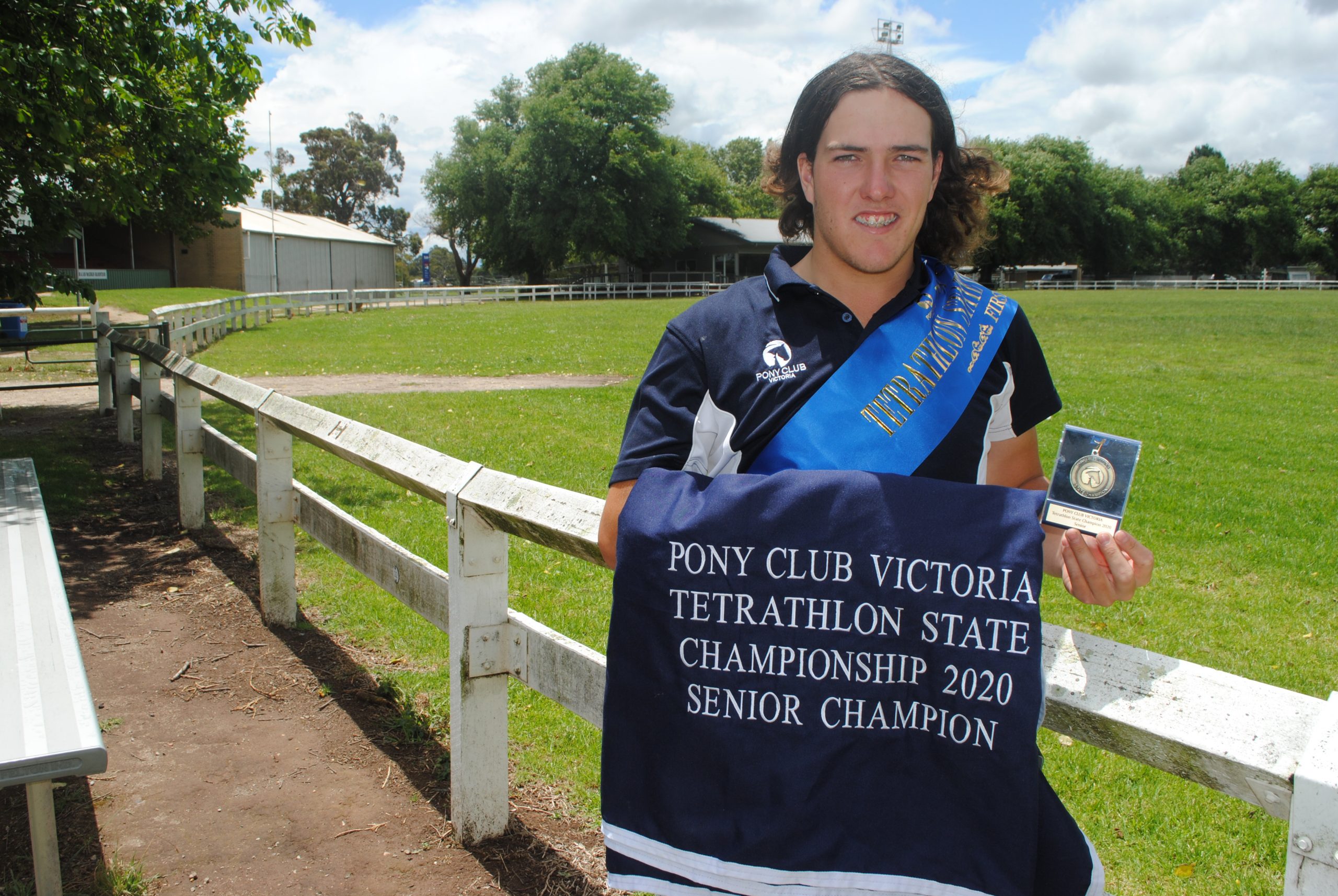 WHILE most people have trouble trying to play one sport, a group of youngsters from Sale and Stratford pony clubs recently showed it is possible to combine multiple disciplines.

Gippsland was well-represented at the Yarra Ranges for the Pony Club Tetrathlon State Championships, with seven locals making the trip to compete against some 80 riders from across Victoria.

Sale and Stratford weren’t just making up the numbers either, with Cohen Wade and Ava Harrington returning home winners in their respective age groups.

To the uninhibited, tetrathlon may be easily confused with modern pentathlon, yet there is one noticeable difference between the two – a tetrathlon incorporates showjumping, running, swimming and shooting, while modern pentathlon encompasses all of those as well as fencing.

There is also another ‘thon’ – equathon – which is a version of tetrathlon aimed at riders under 10 years of age, consisting of running, swimming and riding.

Naturally, tetrathlon and equathon are pathways to modern pentathlon.

Cohen Wade returned a sublime score in the senior tetrathlon, with a personal best time in the 200 metre swim, a win in the three kilometre running section and maximum points for showjumping – one of only two senior competitors to do so.

After winning the title by more than 300 points, the 17-year-old said he was pleased with his performance.

“I was really happy with the run and the ride,” he said.

“The shoot could have been a bit better, and my swimming wasn’t the best because we haven’t been able to train because the pools have all been shut.”

Cohen was able to practice the running and riding component in areas around his Stratford home, and also found a rather ingenious way to practice shooting – using his hallway as a range.

Although all mothers would have a heart attack at the thought of live bullets flying around the house, there was no danger involved as guns used at the tetrathlon are laser pistols.

“The shooting is the hard part because your shoulders don’t hold up very well and you get sore from holding the gun,” Cohen explained.

It was Cohen’s fourth consecutive state tetrathlon title, despite just having moved up to seniors.

From here, he is aiming for national selection to compete on the Victoria team at the 2021 national competition in September.

Cohen has also competed in modern pentathlon and holds state titles plus an international medal from the Asian Oceania Championships held in China last November. Eerily, Cohen was in China just as the pandemic was beginning to take shape.

Dennison nine-year-old Ava Harrington also had a successful championships, winning the female equathon. The youngster was the top competitor in the one km run, 50m swim, and showjumping with horse Ricky by her side.

Ava, who is a member of Sale pony and showjumping clubs, said she was able to practice on her farming property.

“On school days some days we get up early and go and ride,” she said.

“We use the back paddock with the jumps and work on our flat work.”

At the championships, Ava completed the swim first, before undertaking the showjumping and finishing with the run.

Although not yet old enough to go to the nationals for showjumping and tetrathlon, Ava is hoping to make it that far when she becomes eligible in a couple of years time.

Modern pentathlon has grown in popularity in recent years, especially since Chloe Esposito won Australia’s first gold medal in the sport at the 2016 Olympics.

“We’ve been telling people in our local area to come and give it a go,” he said.

“I think they all got a good experience out of it.

“Why people like it is because you have to train for so many events and that’s what brings people together.

Locals can get a firsthand look at a proper tetrathlon/equathon, with Sale set to host an event on the Australia Day weekend.