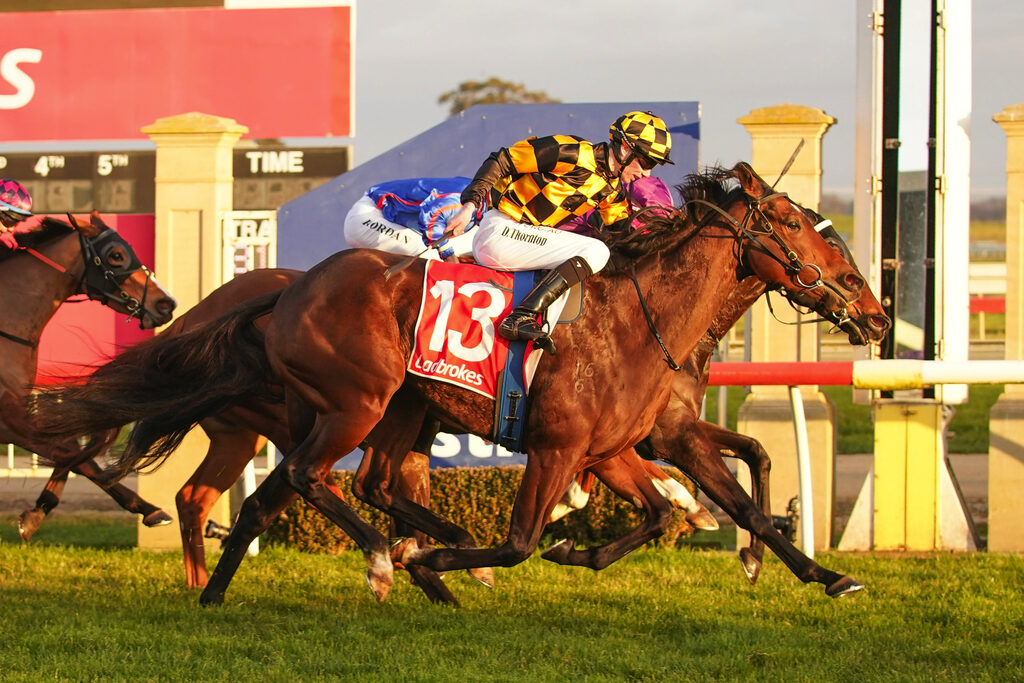 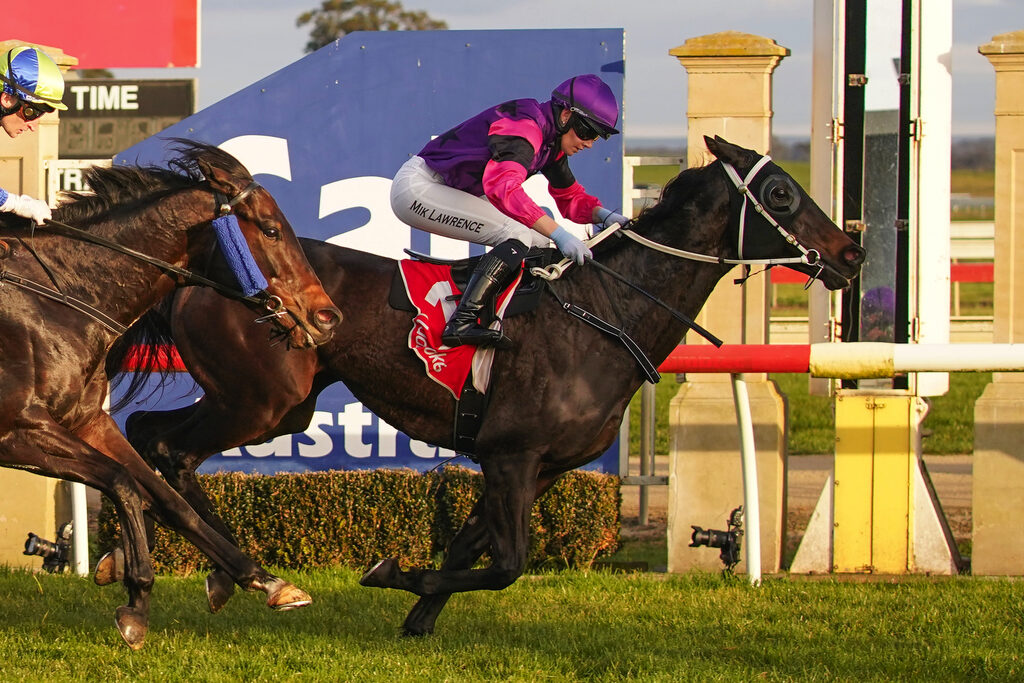 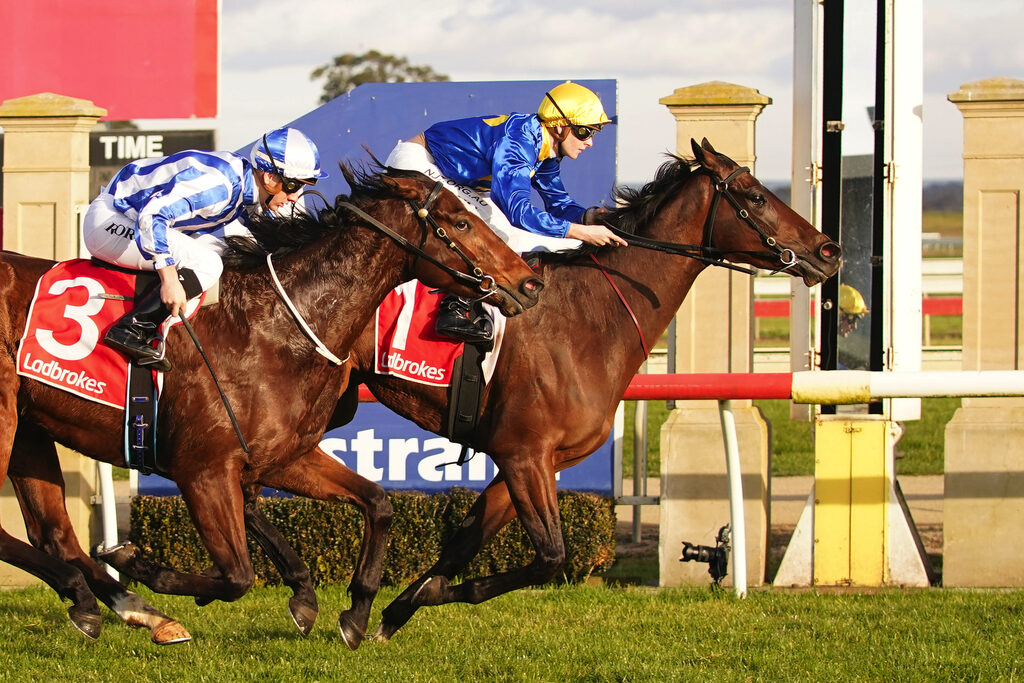 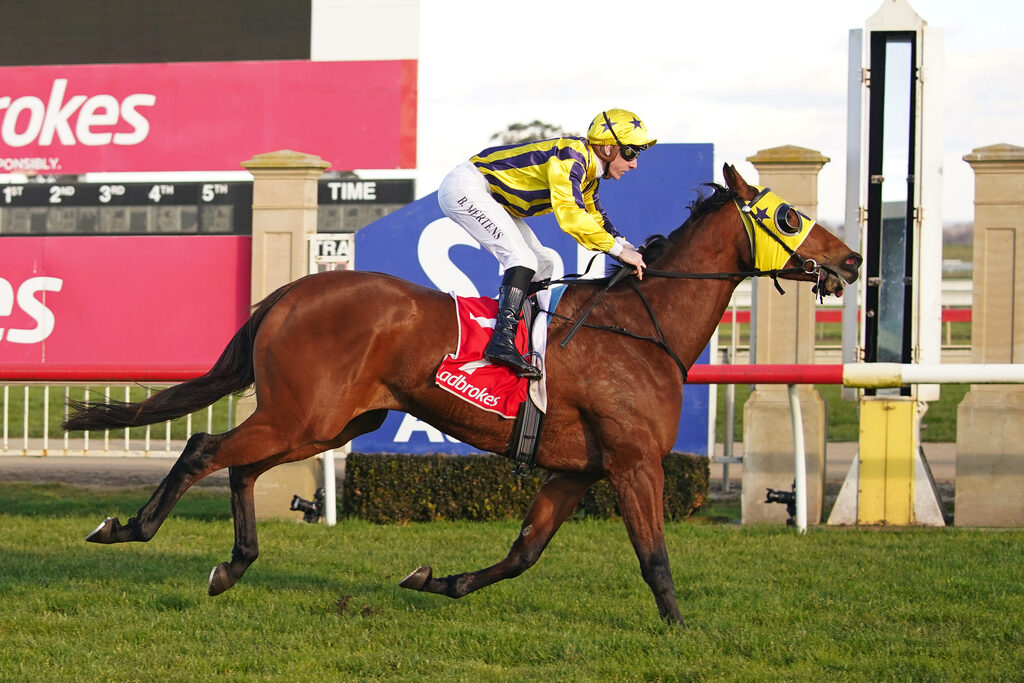 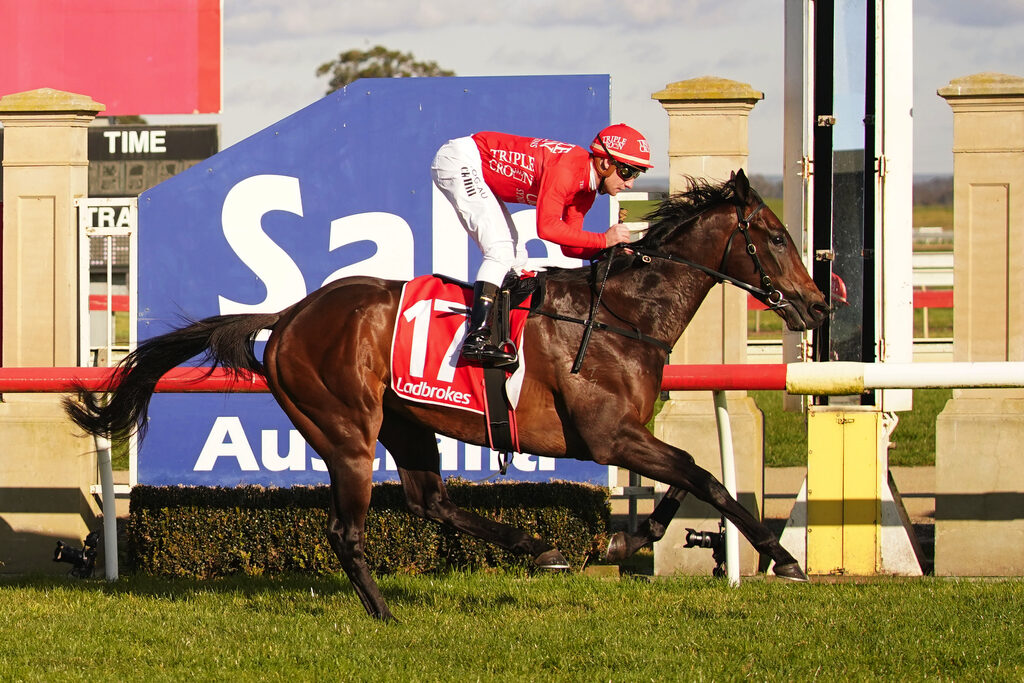 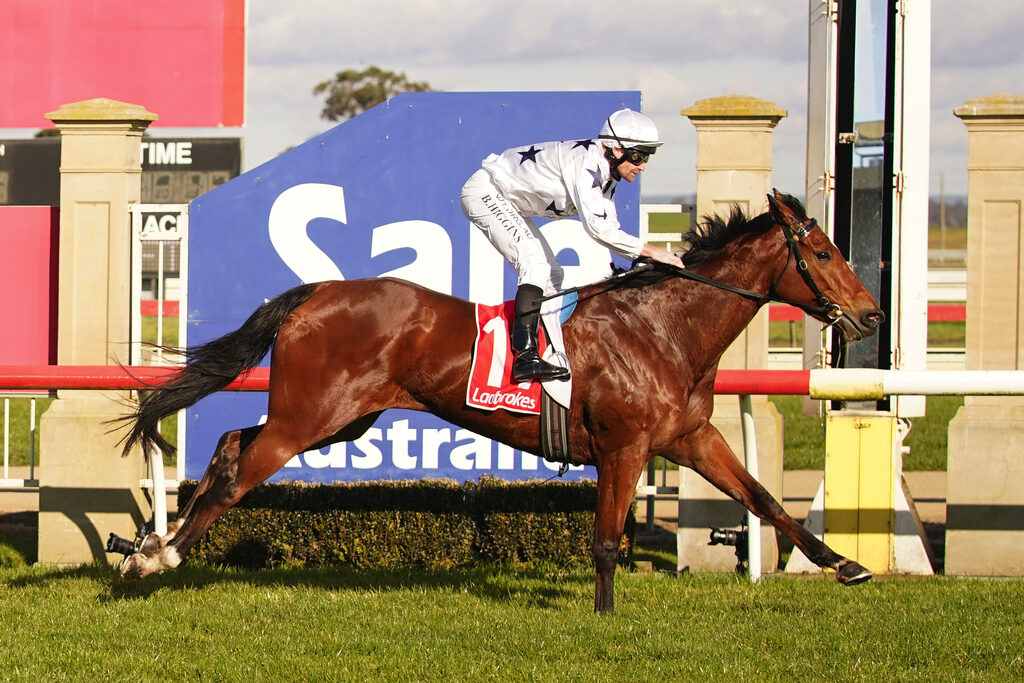 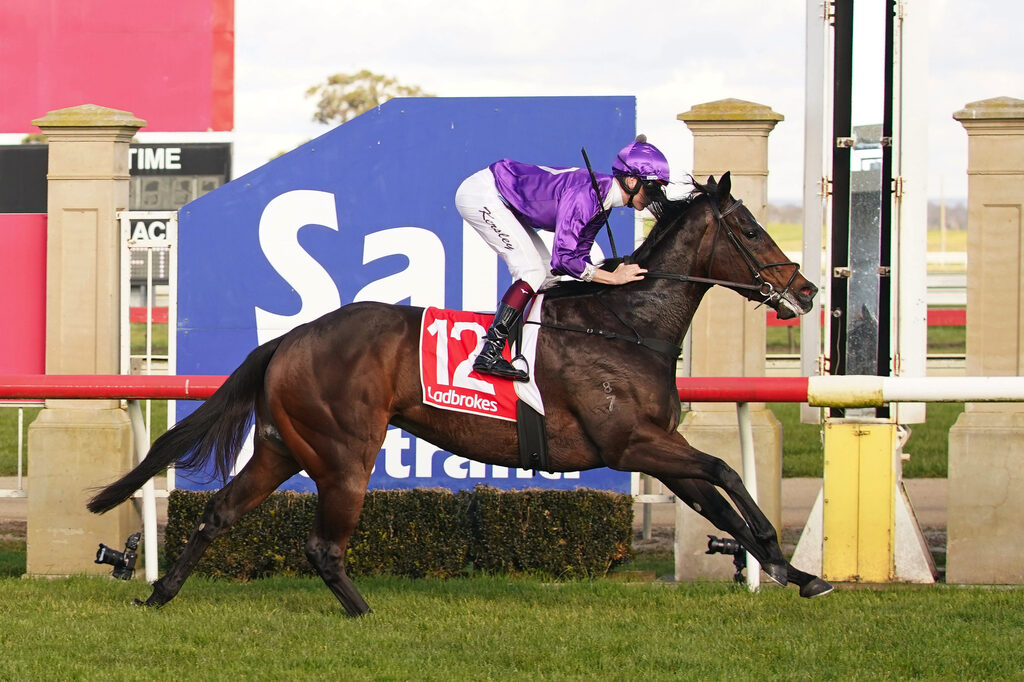 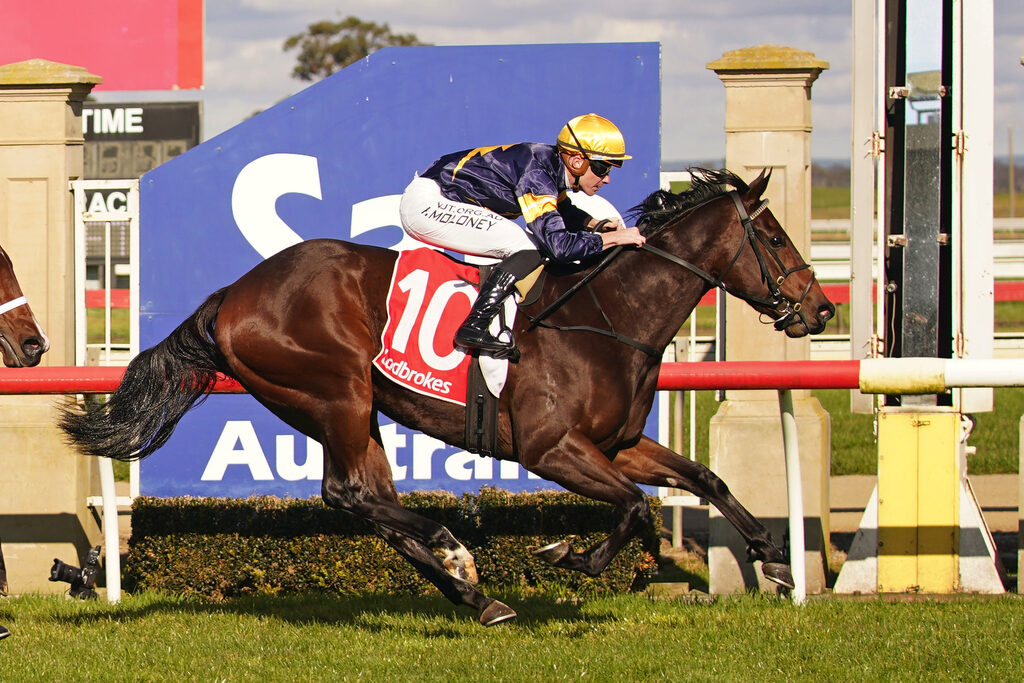 DUKE Of Neworleans produced the run of the day to win at Greenwattle Racecourse on Friday.
In race six, the 1200 metre class one handicap, the three-year-old gelding, trained by Matt Laurie at Mornington and ridden by Ethan Brown, was in last place at the top of the straight, but stormed home to win by almost half a length.
It was Duke Of Neworleans’ second win from five starts, and after finishing eighth at Moe last start, Duke showed the form which impressed at the start of his career.
The Sale track was rated a “soft five” for the meeting, a vast improvement from the “heavy eight” of the previous meeting, which was affected by heavy rain.
Punters cleaned up early, with the favourites claiming top honours in the first two races, both maiden plates over 1100m.
Asteroidea won the two-year-old race on debut for Flemington trainer Michael Moroney. The two-year-old filly, ridden by Patrick Moloney, went straight to the lead out of the gates and controlled the race, winning by a length.
Race two, for three-year-olds, was won by Pelorus Princes, trained by Danny O’Brien and ridden by Fred Kerley. The three-year-old filly took lead in the home straight and won by two and a quarter lengths.
Isolating, trained by Rachel Cunningham at Pakenham and ridden by Brian Higgins, won race three, the 1100m maiden plate for four-plus years. The six-year-old mare’s first win came after begin in the placings five times in her previous 10 starts.
Race four, the 1600m maiden plate, was comfortably won by favourite Shock Zone, trained by Peter and Paul Snowden at Flemington and ridden by Jack Hill. The three-year-old gelding was coming off back-to-back third placings at Pakenham.
Cicero Field ran down the field to win race five, the 1717m class one handicap, by just over two lengths for Jason Warren and Dean Krongold at Mornington. Beau Mertens rode the four-year-old mare to her first win in almost 12 months.
Rolling Moss, trained by Shawn Mathrick at Cranbourne and ridden by Mikaela Lawrence, won race seven, the 1100m benchmark 64 handicap.
The seven-year-old gelding, whose previous win came at Sale in March, won a well-contested race by won by half a length from Libertus.
The day’s final race, the 1400m benchmark 64 handicap, was won by the David Brideoake-trained Silver Lake. The four-year-old mare, ridden by Damien Thornton, was mid-field for much of the race, but produced a big finish to pip Onslaught and Epic Ranger at the post.
The next meeting will the Sale Turf Club’s Christmas in July raceday on Sunday, July 25.