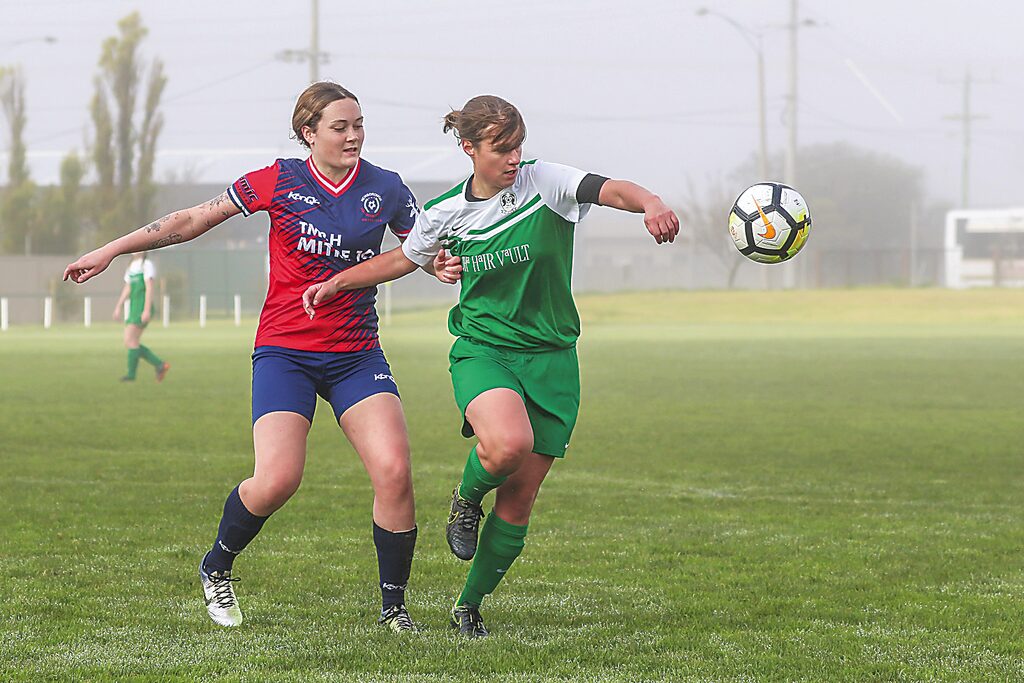 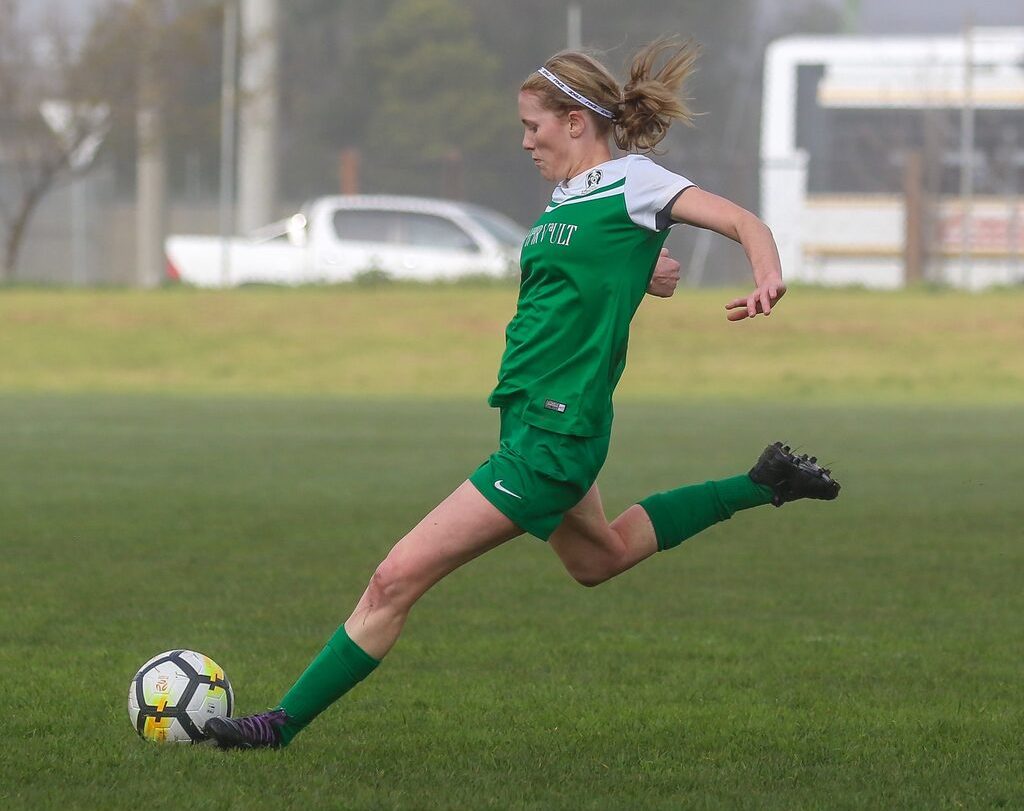 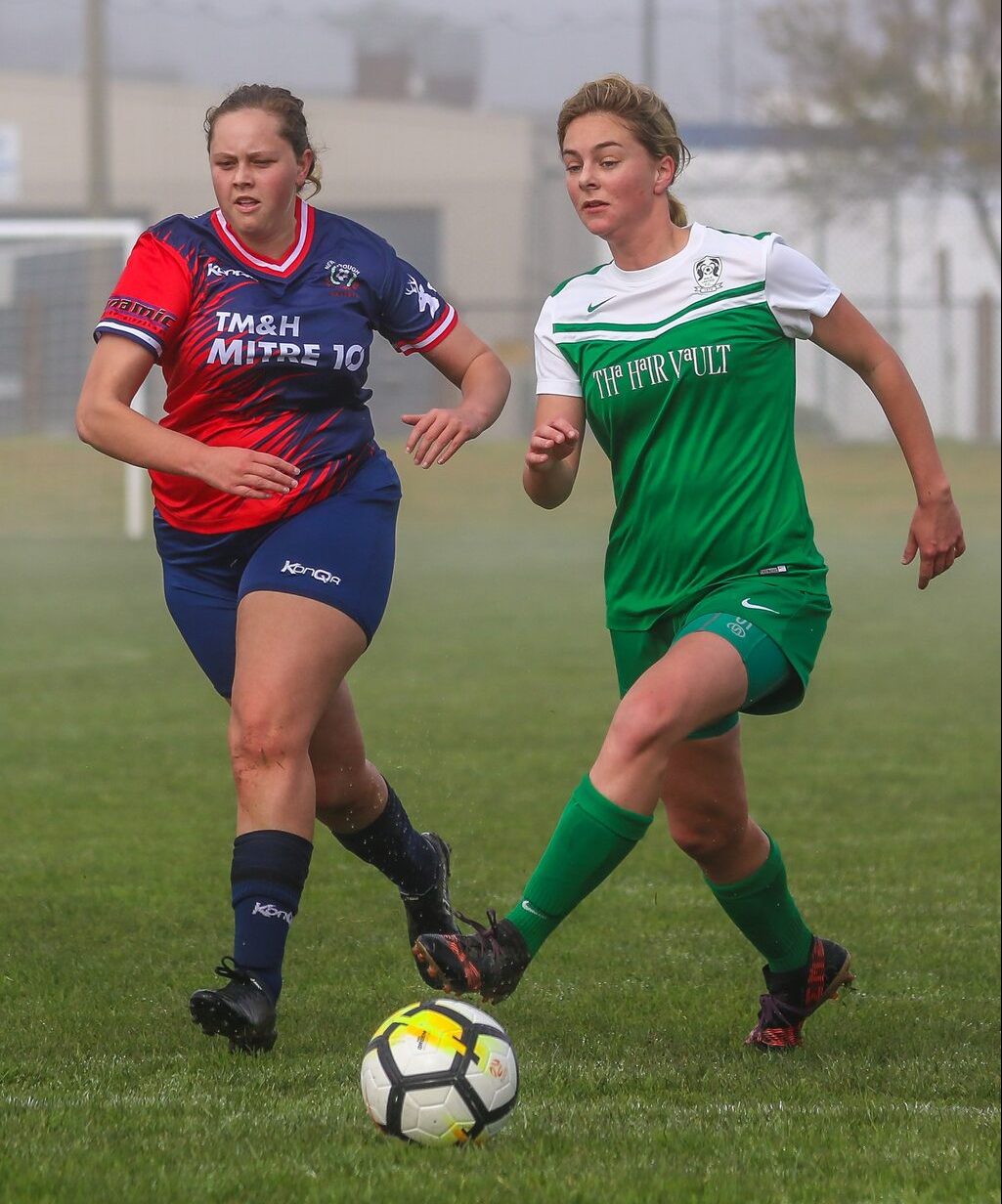 SALE United was too good for Newborough-Yallourn United, winning 7-0 at home to move level on points with Falcons in second place on the Latrobe Valley Soccer League women’s ladder.
Hollie Ryan netted a hat-trick to take her season tally to 24 and extend her lead on the league goal scorers’ list. Courtney Quadrell scored a brace, while Jade Duve and Lemoni Japhary scored a goal each.
Top two teams Fortuna and Falcons fought out a thriller, with the Lions edging out Falcons to win 2-1.
East Gippsland United scored its highest win, defeating Churchill United 18-0, while Monash defeated Tyers-Olympians 4-0.
Sale has the chance to move into second place on the ladder this Sunday, when it hosts Falcons from 10.30am.

Moe wins in the fog

MOE United defeated Sale United 5-0 in foggy conditions on Saturday night in the Latrobe Valley Soccer League.
It was an important clash at home for Moe, which needs to build up its goal difference if it’s going to obtain top position on the ladder.
Moe’s defence lived up to its reputation as the meanest in the league, keeping the Swans score less, while amassing five goals although the first came from an own goal in the 12th minute.
Eleven minutes later, Riley Winkelman, with a deft pass, found Matt Shearing to double the Red Devils’ lead.
Shearing was up to his best and belted in his second goal just on half-time.
Connor O’Hanlon provided the pass which allowed Shearing to bring up his hat-trick 17 minutes into the second half.
Luke Bathgate was playing well across the park, not giving Sale any opportunities to score.
At the 77-minute mark, Nick Dastey provided fans with the goal of the match, heading in a
Sam Litzau cross.
Sale, on a rush, was given a penalty, but energetic veteran goalkeeper Peter Albanese
guessed correctly to keep another clean sheet.
FALCONS and Morwell Pegasus couldn’t be separated after a pulsating match ended in a 0-0 draw.
Throughout the match there were moments of brilliance from both teams as they tried to take the lead.
Both goalkeepers were at their best, with Pegasus’ Simon Santo not only producing the saves of the match, but also stopping a penalty.
Falcons keeper Charles Simon also came in for praise after blocking two superb drives from Bienfat Kayago.
Falcons was well-served by Nonda Lazaris, who provided plenty of spark up forward but came in for plenty of attention. Anton Antonopoulous was doing well for Pegasus, while Nelson Tombra created exciting passages of play.
Players became almost invisible to the eastern side as the fog rolled in late in the match, but neither team could score which saw Falcons only gain one point and drop back a spot on the ladder to second.
TRARALGON City’s match on Sunday against East Gippsland United went as expected, with the Roosters running out easy 5-0 winners.
It took only the Roosters 10 minutes to open the scoring, when DJ Matar beat the keeper, but worse was to come for the Eagles, as Jake Budija scored twice to give the City a 3-0 half-time lead.
East Gippsland was competitive but couldn’t get past a solid City defence, as the Roosters scored twice in the second half through Michael Gaudiano and Matar.
NEWBOROUGH-YALLOURN United had not so easy 3-0 win over Churchill United.
The Rams made the Combine work hard for every goal.
Play went back and forth until NYU got a lucky break for Mark Fairbrother scored in the 20th minute.
After another 10 minutes of pressure soccer, Ash Birrell scored NYU’s second goal.
The visitor was held to one goal in the second half, from Alex Van Vliet.
FORTUNA made it hard for Monash to reach the finals with a massive 6-0 victory.
Goals from Damon Scott (15th and 18th minutes) and Jordan Campbell (24th) demoralised Monash, which had no answer to Fortuna’s firepower. Fortuna added another two goals in the second half from Oliver Spiteri before Scott completed his hat-trick in the 78th minute.
TRARALGON Olympians, coming off the bye, will go in as favourite at home against Sale United this Sunday.
While Olympians’ form this season has been underwhelming and not a patch on its success of 2019, it should still be too strong for the Swans, who have struggled so far.
With only pride at stake, these teams will want to finish the current season on a high.
After playing a succession of night matches, Falcons will be back to daylight to play local rival Fortuna.
In another local derby, Newborough-Yallourn will host top side Moe, with only four points separating them on the ladder.
Pegasus will host Churchill.
The round will begin on Saturday night, with Monash hosting Traralgon City.
East Gippsland will have the bye.