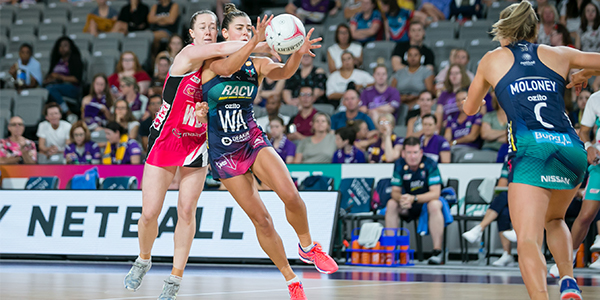 FORMER Yarram and Sale netballer Lara Dunkley has been elevated to the Melbourne Vixens’ main squad for the Super Netball season.

Dunkley replaced Tayla Honey, who ruptured her Achilles in February, in the squad of 10.

Dunkley took to the court for the first time in a Vixens dress for the recent Super Netball pre-season tournament, playing the second half of a game in centre against the Queensland Firebirds.

Dunkley said while it’s not an ideal circumstance, she was grateful for the opportunity.

“I’m shattered for Tayla and obviously I’d love for this to have been under nicer circumstances, but to be given this opportunity, I’m definitely honoured,” Dunkley said.

“Being my second year as a training partner and being a part of this elite environment has really guided me in what’s expected not just on the court.

“I was nervous and had sweaty palms but as soon as I got out there I felt so comfortable with the girls and they made me feel like it was just another game.”

Playing for the Vixens has always been a goal of Dunkley’s.

“From when I first stood on the netball court I just wanted to try and be the best netballer I could possibly be and being apart of the Melbourne Vixens is an absolute dream come true,” she said.

“I am super excited and so grateful for this opportunity I have been given.”

“Lara’s development over the last year as a squad member has been very impressive, and it was great to see her put all her learnings out on court with the team.

“Both Lara and Tayla are great examples of what the training partner program is about – developing the up and coming talent within the elite environment to allow a smooth transition when the opportunity presents itself.”

Dunkley has been a training partner with the Vixens since last year.

For pre-season, the Vixens train seven sessions across six days a week, and once the season begins at the end of April, the Vixens will train five days a week and play on weekends, with a recovery day squeezed in too.

Dunkley is also heavily involved in coaching junior netballers, currently coaching an under 15 representative side, as well being an academy coach at Bianca Chatfield’s Victoria University Netball Academy.

She also coaches during school holidays through Netball Victoria and Australian Sports camps.

As a trained teacher, Dunkley also finds time to squeeze in some relief teaching in Melbourne’s eastern suburbs.

A former captain of Victorian Fury, Dunkley can be released back to the Australian Netball League team if she doesn’t get court time with the Vixens.

Dunkley issued some advice for junior netballers who were perhaps aiming to make the Vixens side too one day.

“Never give up, keep working hard and be prepared to make sacrifices to allow you to follow your dreams,” she said.