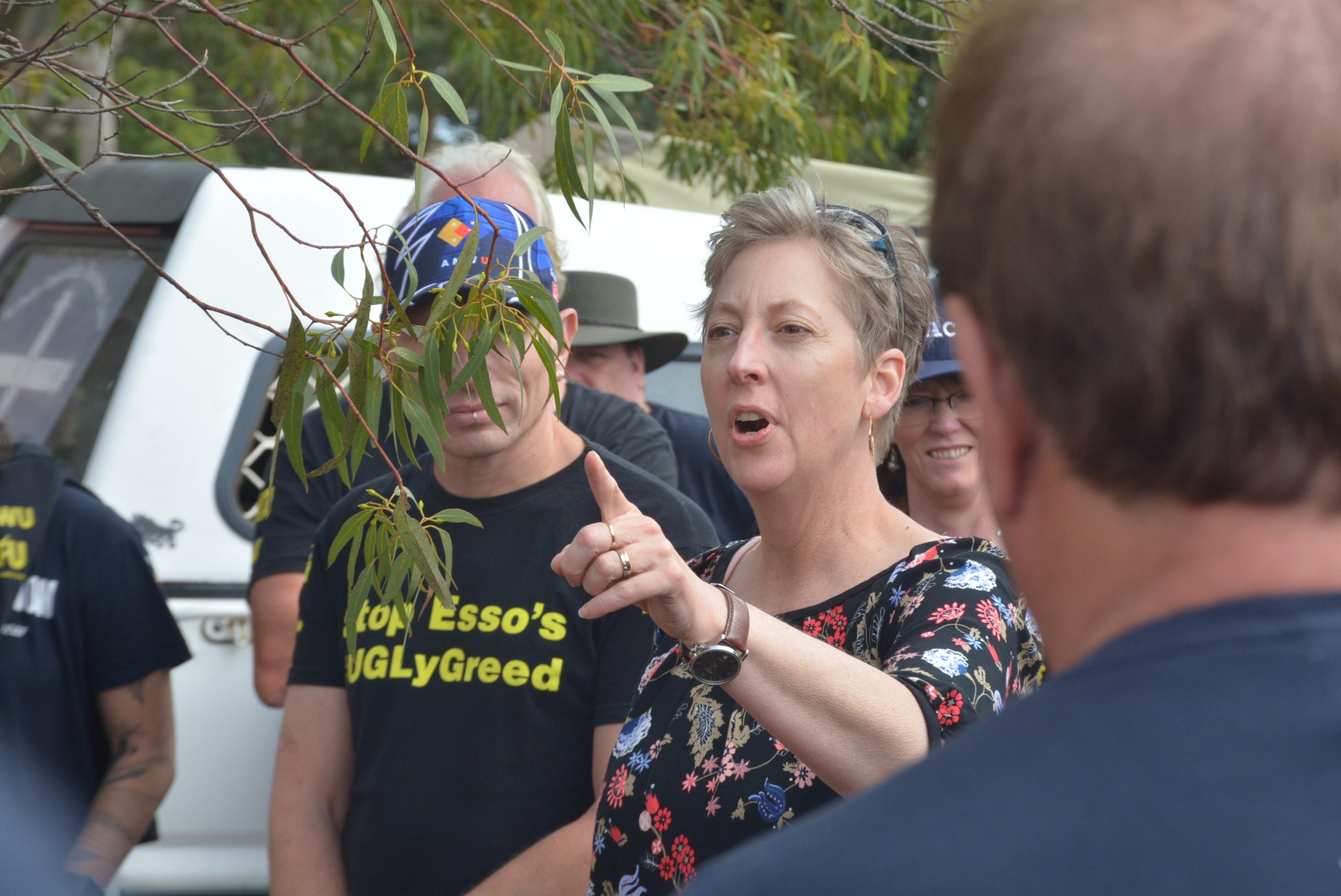 LABOR has again vowed to change workplace laws if it wins government at the next federal election.

Federal shadow assistant for workplace relations Lisa Chesters and Labor candidate for Gippsland Dr Antoinette Holm spoke at a rally outside Esso’s Longford Gas Plants on Thursday, to reiterate Labor’s intention to close what they say is a “loophole” in workplace laws.

In June 2017, UGL contract maintenance workers were sacked and offered their jobs back, under what Labor describes as “an inferior workplace agreement”.

The new agreement cut wages by more than 30 per cent, reduced entitlements and introduced what unions say was a less family friendly roster.

No laws were broken, but Labor says the fact the contractor tendered on the basis of an enterprise agreement approved by just five casuals in Western Australia working through subsidiary MTCT, was not in the spirit of the way workplace negotiations should take place.

None of those who signed the agreement worked in this area, where it came into force.

Labor has vowed to change the law so that workers and their unions can apply to the Fair Work Commission to re-negotiate what it calls “sham agreements”.

Ms Chesters said it was imperative there was a change to workplace rules and the legal “loophole” was closed.

“… whilst it’s unfair, it’s completely legal under the Fair Work Act,” she said.

“So we’re here to say if Labor’s elected … then those rules will change.”

The shadow minister also took aim at the Liberal-Nationals government, particularly Gippsland MHR Darren Chester, who she claimed had let workers down.

But Mr Chester later shot back, saying the workplace laws were legislated under the then Labor government.

“It’s typical of an out-of-town Labor MP to turn up for one day, make up stories and then disappear,” he said.

“I hope the Member for Bendigo also visited coal-fired power station and timber workers while she was in the region and explained why her party is opposed to them continuing to work in their industries.

“Blue collar workers across Gippsland know the Labor Party has sold them out to secure green votes in the city, and I have always backed local workers,” he said.

But Mr Chester’s challenger for the seat of Gippsland, Dr Holm, said she admired the continued fight put up by workers at Longford.

“They’ve been here a long time, they have been fighting for a long time and it is important because these men and women are a link to what is actually a global attack on workers’ conditions,” she said.

“The rules are too far in favour of the employer at this point in time, and [companies] are taking advantage of it to maximise their profits,” he said.

“The unions will put expectations on Labor, and one of those expectations is fair workplace laws, so we can bargain fairly, protect our jobs, get rid of casualisation, and not see this sort of thing happening …

Mr Dodd also spoke of the news of the impending exit of ExxonMobil chairman Richard Owen for another role within ExxonMobil, with incoming chairman Nathan Fay taking over the reins about April 1.

“With the new chairman coming in, we fully hope that we can sit down and negotiate and get a fair outcome for workers and the community at large.”

Following the rally at Longford the Gippsland Times approached Esso for comment.

A company spokesperson said specific rates of pay and conditions of employment were a matter between UGL and its employees, and Esso was not party to discussions between UGL and unions.

UGL has repeatedly declined to comment on the dispute.

At almost 650 days, the Longford dispute is currently the second longest running industrial dispute in Australian.

The AMWU is planning a major rally in Melbourne’s CBD on April 10, ahead of an expected May federal election.