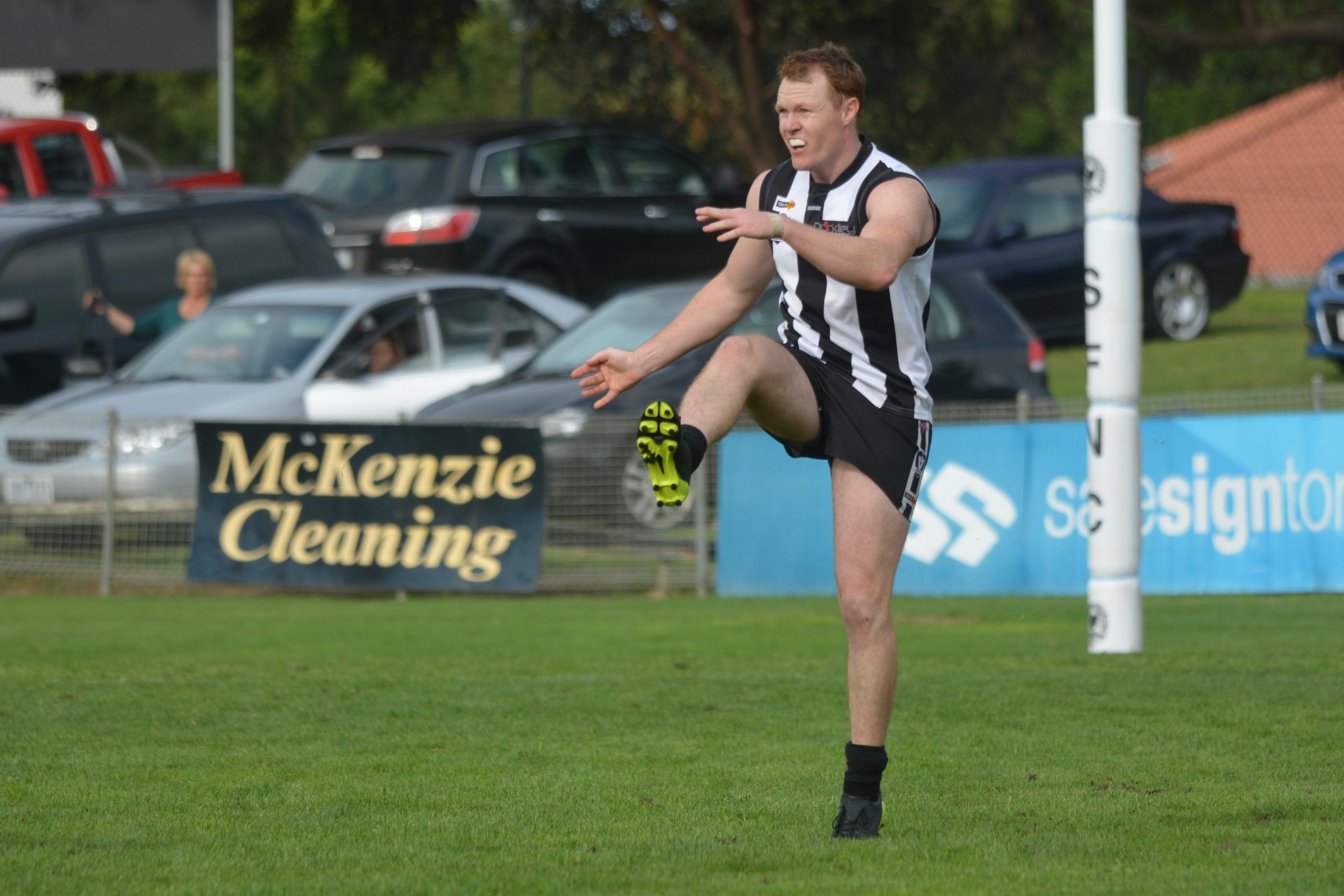 SALE stalwart Chris Laverty will create club history on Saturday, when he runs out for his 300th senior game for the Magpies against Morwell.

The 35-year-old will become the first Sale footballer in 142 years to achieve the senior triple century milestone, following on from his record breaking mark last season when he overtook former teammate Kane Fraser’s record of 286 games.

Leading into the milestone, Laverty said he was committed to the task of winning the match against the Tigers first and foremost, but had enjoyed the opportunity to look back on a decorated career.

“The body’s feeling alright and the boys are all playing pretty well, so we’re pretty confident and happy going into the match,” he said.

“I’ve been trying to focus on the task at hand for now, but looking back it’s been a pretty good journey, a couple of premierships and finals for the majority of the years I’ve been there.”

Laverty began his career with the Magpies in 2001, making his senior debut against Moe, and noted how much the game had changed since the early 21st century.

“The pace of the game is so much quicker now, it used to be you would start on the ball, play there and swap once per quarter, but now you are off and on a lot more,” Laverty said.

“Back when I started you were lucky to have 30 rotations in a game, now you need one or two rotations per player-per quarter.”

Along the journey the veteran has enjoyed premiership success on two occasions, most recently in 2012 when Sale waltzed through the competition, and in 2008 when he held the cup aloft as captain.

Laverty pointed to the 2008 triumph as his finest hour.

“’08 was definitely the highlight as we were coming off back-to-back losses, so there was a fair bit of relief more than anything when the final siren went and we were in front,” he said.

“It was pretty emotional just being around everyone.

“Then in 2012 we had a strong list of players and Ferg (coach Matt Ferguson) brought a new game plan and style to the area which hadn’t been seen before with a full ground press and pressure and it caught a lot of other teams off guard.”

Having played finals in 12 of his 18 completed seasons, Laverty credited the strong nucleus of current Sale senior players, eight of whom played close to 1500 senior games between them, as one of the main reasons for their consistency.

“There would be a group of about 10 of us who have played a lot of footy together so everyone knows the way each other sort of plays and it’s helped people want to stay around the club as well because you form pretty good bonds with one another and you don’t really want to leave,” he said.

“There is a good culture, most teams in most leagues strive to play finals every year and it doesn’t always happen, but it’s something to build towards and having that group of players who have stuck around and know what it takes to play finals goes a long way.”

Laverty pointed to current Sale midfielder Kane Martin as one of the best he has played alongside, as well as premiership teammates Luke Collins and Matt Ferguson.

“Josh Dunkley would also be up there, as a very young player he nearly won our senior best-and-fairest as a 16-yearold,” Laverty said.

“From other clubs probably the best I’ve played against would be Ben Coleman from Maffra, Andy Soumilas (who won two league best-and-fairest while at Drouin and Garfield), Paul Hudson (Leongatha) and Nick Hider (Maffra).”

Laverty has been remarkably durable over the years, missing only 11 games since debuting, something he put down to “a bit of luck”, but also hard work.

“Fortunately I haven’t had too many injuries and have kept fit with a lot of work in the offseason, I find the fitter you are the less chance you have of injury,” he said.

“When you’re younger you feel invincible and think it’s going to go forever, but as you get older you realise you need to keep putting in the work to be able to play.”

Laverty has also been a disciplined role model to teammates and younger members of the club – never once inviting the umpire to note down his number for a report.

Playing primarily in the back six, Laverty’s quick decision-making and excellent disposal have been the hallmarks of a career that has also seen him achieve Gippsland League honours.

In 2006 and 2007 he was selected in the then West Gippsland Latrobe Football League senior team of the year, and in 2008 he played interleague at the annual championships, which took place at Sale Oval.

Current senior coach Shane Fyfe said apart from being one of the team’s most reliable players, Laverty was a “great clubman and great bloke”.

“He’s probably our hardest trainer on the track even though he’s pushing 35,” Fyfe said.

“He’s somebody you play anywhere, ask him to do any job and he’ll just say yes and do it.

“He puts in a lot of time and effort off the field as well, he always runs our Thursday night raffle and is always happy to help someone else.”

Two further accolades have also typified Laverty’s contribution to the Sale Football-Netball Club – selection in Sale’s team of the 2000s and awarding of life membership in 2012.

With Sale currently on top of the ladder, Laverty was hoping further success could be on the horizon, but said he remained unsure about how many years he may have left.

“It would be nice to keep playing but to be able to play at this level takes a lot of time travelling and preparing, so I’m just taking it year-by-year at the moment,” he said.

“I’ll weigh it all up at the end of the year, I’ve got a young family so you have to put in time there as well.

“But personally I’d like to thank my family who have been there the whole time and the club for having me for all these years.”

The club will hold a presentation dinner on Saturday night in the Magpies’ social rooms when players, members and supporters return from Morwell.