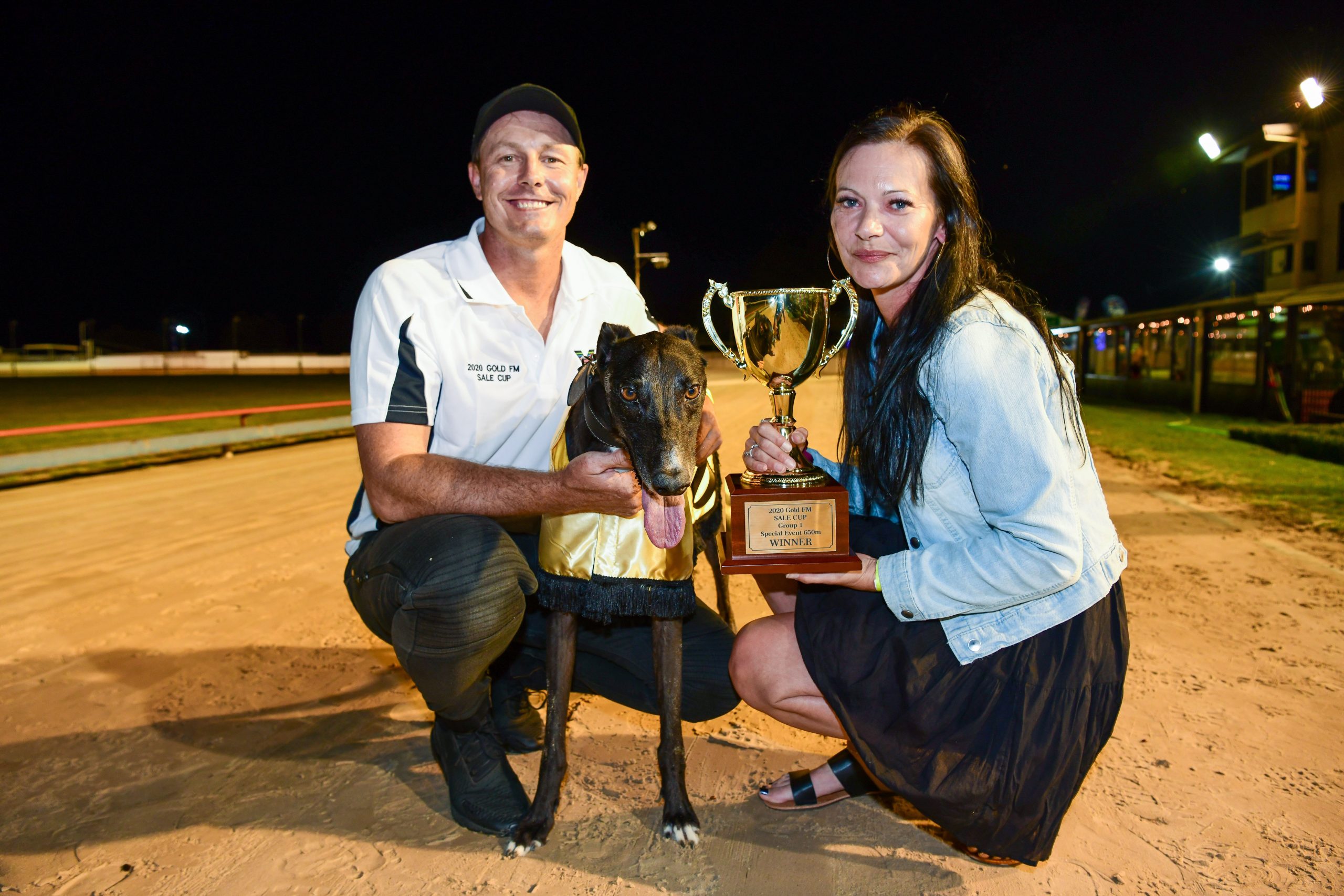 THE freakishly talented Houdini Boy claimed his first – but almost certainly not his last – group one trophy with a stunning last-to-first victory in the Sale Cup final, raced over 650 metres on Boxing Day.

Trained by master Pearcedale mentor Kel Greenough, Houdini Boy has created headlines with his barnstorming performances and he needed to call on all the magical qualities of his namesake, renowned escape artist Harry Houdini, to open his group one account.

While Houdini Boy raced in a more forward positon in a runaway 36.78 second heat victory, the drifting $2.30 favourite from box five found himself in familiar territory at the tail of the field rounding the first turn in the cup final.

With Hume Cup winner Last Hurrah setting the pace, the son of Zambora Brockie and Pechey, a daughter of Greenough’s group one-winning stayer So Seductive, improved along the rail before hooking to the outside in the home straight.

Once into the clear, Houdini Boy unleashed a powerhouse finishing burst to defeat Last Hurrah and Bobby The Brute in 36.96s.

“Down the back he’s given them a long start, he got into trouble everywhere he went. To run them down like that is just a fantastic effort.

“His will to chase and win the race is what makes him what he is. He can get knocked over, he can go around them. He can do whatever.

“That’s why he’s such an exciting dog.”

Pattinson, who played Test cricket for England, didn’t hesitate to rate being associated with Houdini Boy as a personal sporting highlight.

“I’m just really proud of the dog and everyone at home.”

And while on the cricketing theme, TAB offered up a Boxing Day Greyhound/Cricket special involving Houdini Boy to win the Sale Cup into Glenn Maxwell to hit a six for the Melbourne Stars in the Big Bash. Maxwell delivered in spades, nailing a total of five sixes, with punters relishing the $4.80 on offer for the unique double.

Houdini Boy has now won 13 of his 24 starts and the Sale Cup was his second Group victory, after he won the group three Speed Star over 600m at Sandown Park in September.

He’s also appeared in Group 1 events over staying and sprinting distances, running third in the Bold Trease over 715m and sixth in the Vic Peters Classic over 520m.

While it was Houdini Boy’s first group one success, his owner Mark Ruff is certainly no stranger to racetrack celebrations, having been involved in the ownership of two Melbourne Cup winners in the thoroughbred code; Twilight Payment this year and Rekindling in 2017.

There was a surprise result in the Rising Star final (440m) when $23 roughie Hoffa, prepared by Glenn Rounds, led all-the way in 24.64s, while Deb Coleman’s first reserve Zipping Sullivan held on to win the Summer Cup final (520m) in 29.28s.

After missing out with the favourites in both the Rising Star (Louie Lou) and Summer Cup (Taken), Jason Thompson took out the Gippsland Festival Sprint final (440m) with Warrnambool Cup winner Zambora Smokey in 24.47s.

The Sale Cup was the first of three country cups which feature as part of greyhound racing’s 2020-21 Gippsland Festival of Racing, with the Warragul Cup (January 16) and Cranbourne Cup (February 6) to follow.