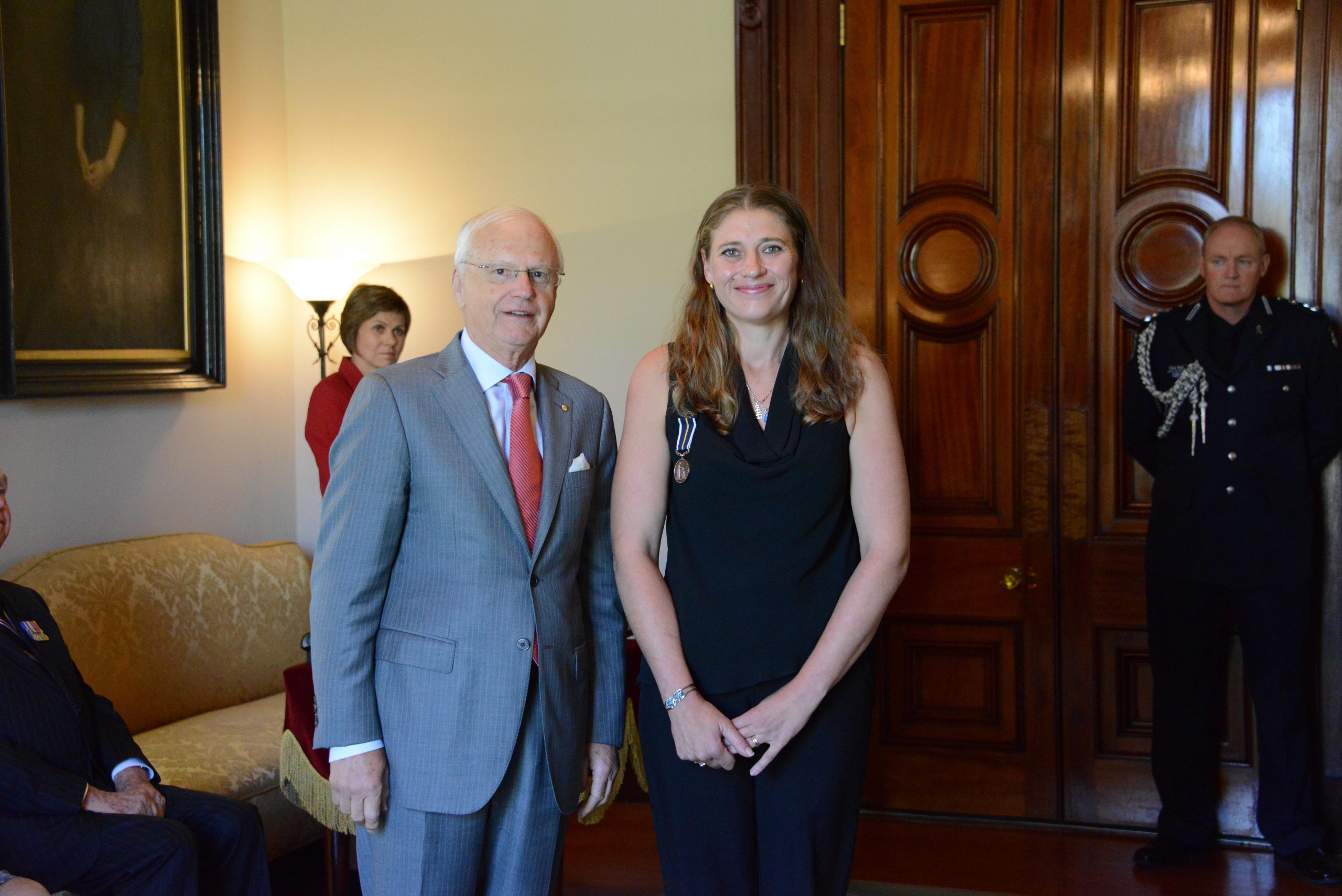 A LOCAL woman has been recognised for her bravery in rescuing her son from a house fire.

Ms Nuttall received the medal from Governor Alex Chernov in recognition of her efforts to rescue her son Christopher from a burning house at Airly on May 15, 2012.

At 9.50pm Ms Nuttal and her partner Andrew Capper heard the sound of glass breaking and Mr Capper jumped out of bed and went into the hallway and yelled “fire, fire”.

Ms Nuttall ran into the hallway and went to her daughter’s bedroom and helped her to escape the fire via the front door.

Both Mr Capper and Ms Nuttall tried to get through the hallway doors to Ms Nuttall’s son’s bedroom but were unable to due to the thick black smoke and intense heat.

They both ran out the front door and Ms Nuttall ran around the verandah to an external door of Christopher’s bedroom and smashed the door down with her hands and smashed the glass panels and tore the rotten wood away. Ms Nuttall pulled the curtain back and a thick black cloud of smoke choked her.

Mr Capper and Ms Nuttall were then alerted by other family members that they thought the boy was in the back extension of the house.

Mr Capper went into the burning house via the back door and located Christopher lying on the floor unconscious about five metres from the back door. Ms Nuttall ran in behind Mr Capper and through the thick smoke helped to drag him outside.

The young boy was transferred to the Royal Children’s Hospital where he spent three months and was left with severe injuries.

Mr Capper suffered burns to his head and hands and Ms Nuttall some burns and cuts to her hands and feet from the broken glass.

Mr Capper has been awarded the Clarke Silver Medal for the most outstanding act of bravery in 2014 and will be presented with his award by the Governor-General in a separate ceremony.

A man who sacrificed his life to save his son from drowning at Golden Beach last year was recognised with a posthumous medal.

About 3.15pm on March 9, 2013, Adam Moody’s 10-year-old son was swimming about four metres from shore. As Mr Moody began to wade out to his son they both became caught in a rip which started to take them further out to sea.

About 40m from shore Mr Moody held his son above the water while struggling to keep above the water himself. He then assisted his son onto a wave which carried the boy three to four metres closer to shore and they became separated.

Another man paddled out to Mr Moody’s son and brought him back to the shore.

Mr Moody’s body was recovered from the water a few hours later.

A woman has been recognised for her efforts to rescue two men from drowning at Golden Beach on January 27 last year. Leela Holland of Endeavour Hill received a bronze medal.

At 3.20pm a man was in the rough surf on his own in a small rubber boat when he was thrown out of it. He then got caught in a rip and became exhausted.

He raised his hand to signal for help from the shore and Ms Holland and another man swam out to him with a body board. Ms Holland reached the drowning man and brought him safely to shore.

Ms Holland then noticed that the other man who had swum out to help was now in difficulty in the rip and heavy surf. Despite being very tired Ms Holland took to the water again and managed to bring him safely to the shore.