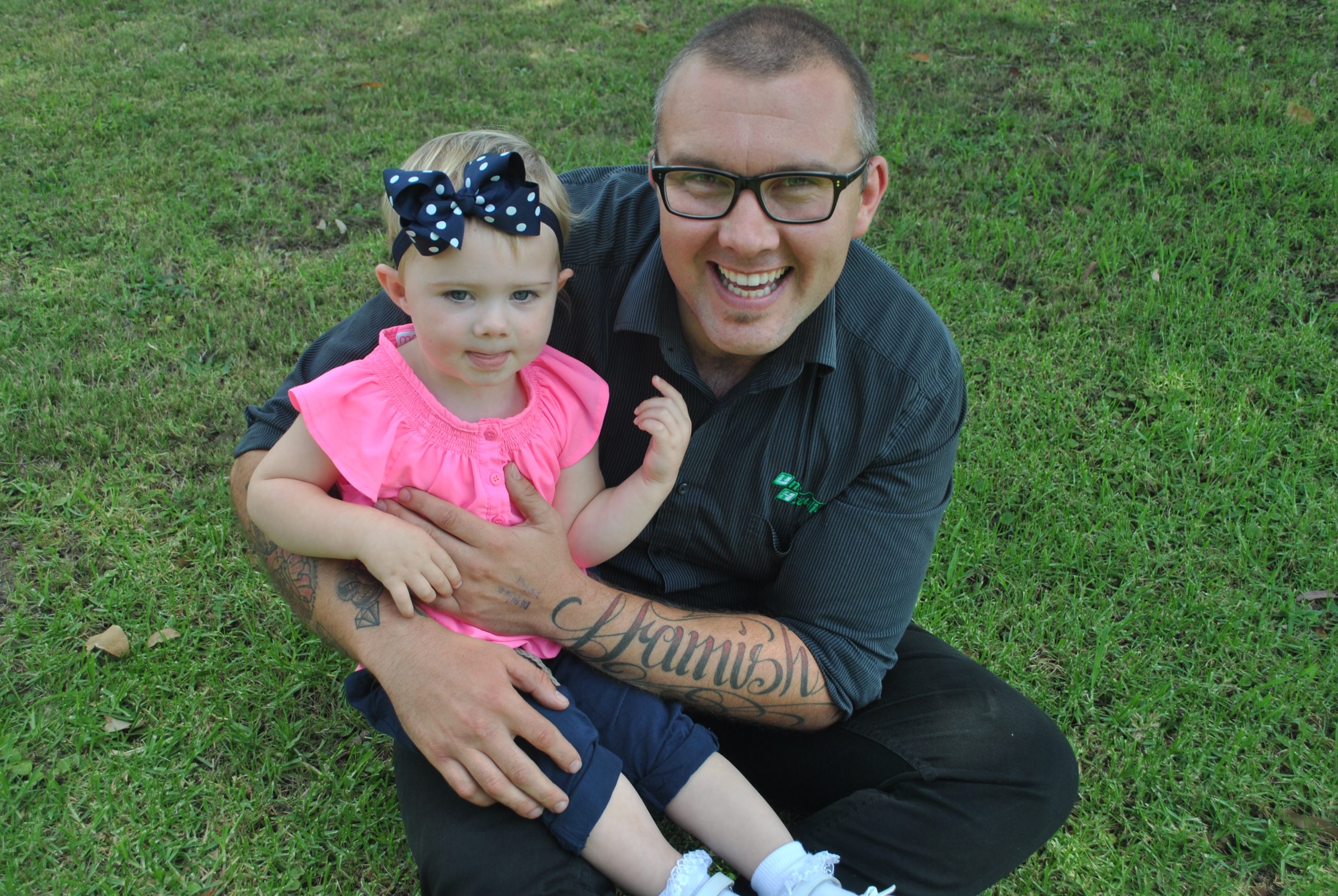 LONGFORD man Michael Scott will ride about 1600 kilometres from Sale to Byron Bay over 11 days in April to raise money for the National Stroke Foundation.

Soon after she was born on June 19, 2013, Olive was taken from her mother’s arms when her body began to show signs of severe distress.

Her mother Chloe had just finished giving Olive her first feed when she went limp and turned blue.

They later found out she had suffered an infantile stroke.

“We haven’t put a finger on when it sort of all happened, but she stopped breathing only about 20 minutes after birth,” Michael said.

“That was pretty hard to comprehend.”

Michael said he was on the phone to his parents giving them the good news when Chloe said ‘is she supposed to be this blue?’

Michael said a midwife took Olive from Chloe and quickly left the room.

“While I was on the phone Chloe said ‘can you go see where our baby is?’

“They had her in the nursery keeping a very close eye on her,” Michael said.

“That was the first resuscitation attempt to get her back.”

Michael said they felt numb, not knowing how to react or even comprehend what was happening.

He said he knew there were many things that could go wrong during and after childbirth, but their baby having a stroke was something they had never considered.

The same day she was born, the third-time parents were told Olive would have to be flown from Central Gippsland Health Service to Melbourne’s Royal Children’s Hospital.

Because of excess weight onboard the plane, Michael and Chloe couldn’t fly with Olive.

“The weather was bad that night,” Michael said.

“They were carrying more fuel on the plane so they had to carry less baggage.

“So Chloe and I hopped in the car with Chloe’s younger sister Teagan.

“I think we got to the hospital at like 3am in the morning or something like that.”

Still numb to what was happening, Michael and Chloe were told by hospital staff ‘we’re going to keep running tests, hop on down to your room’.

“And then it hits you like a ton of bricks,” Michael said, “when you’ve got time to sit down and think about where you are and what’s happening.”

He said there weren’t any solid answers for about four days.

After doctors had assessed Olive, Michael and Chloe were told to expect many back and forth visits to Melbourne.

“They basically gave us the heads up that we would be busily up and down the highway for the next three years, keeping on top of things after they worked out what was happening,” Michael said.

After many stressful hours and invasive tests, doctors delivered the news.

During the first hour of her life, Olive had suffered an infantile stroke, an intracerebral haemorrhage.

They remained at the Royal Children’s Hospital for almost three weeks.

Michael said the stroke caused a severe disability to the right side of Olive’s body and damaged the part of her brain that controls memory, language and speech.

He said since her birth, they have been consulting numerous medical professionals.

“She’s seems to be keeping up well,” he said.

“She’s just a little ball of cuteness at the moment.

“The main concerns at the moment are based around her medication dosage to make sure her seizures are controlled.

“Hopefully the medication stays on top of it until things sort of settle down.

“If that’s not the case then they’ll have to look at a hemispherectomy where they cut the (brain) open and remove the damaged piece of brain that she lost during the stroke, so hopefully the medication stays on top of that.”

There will be challenges, but Michael said Olive had her older siblings Hamish, four, and Willow, six, to look after her.

“She’s kicking goals at the moment,” he said.

“She’s got to keep up with them so she’s determined.

“She gets up with them and runs around with them at a million miles an hour when she can.”

Michael said Hamish and Willow seemed to have a good understanding of Olive’s condition.

“In the beginning it was tough,” he said.

“They didn’t understand why mum and dad were gone in the beginning and constantly on the road while they were at nan and pop’s a lot.

Michael will begin his Stroke of Genius Tour ride from Sale to Byron Bay on April 24 and he hopes to raise $25,000 for the National Stroke Foundation.

He said the ride would be a challenge, but Olive had showed her strength, so now it was his time to show his.

People can donate by visiting doit4stroke.everydayhero.com/au/william or email Michael at michaels@unionhyd.com.au

For more information about the National Stroke Foundation, visit strokefoundation.com.au