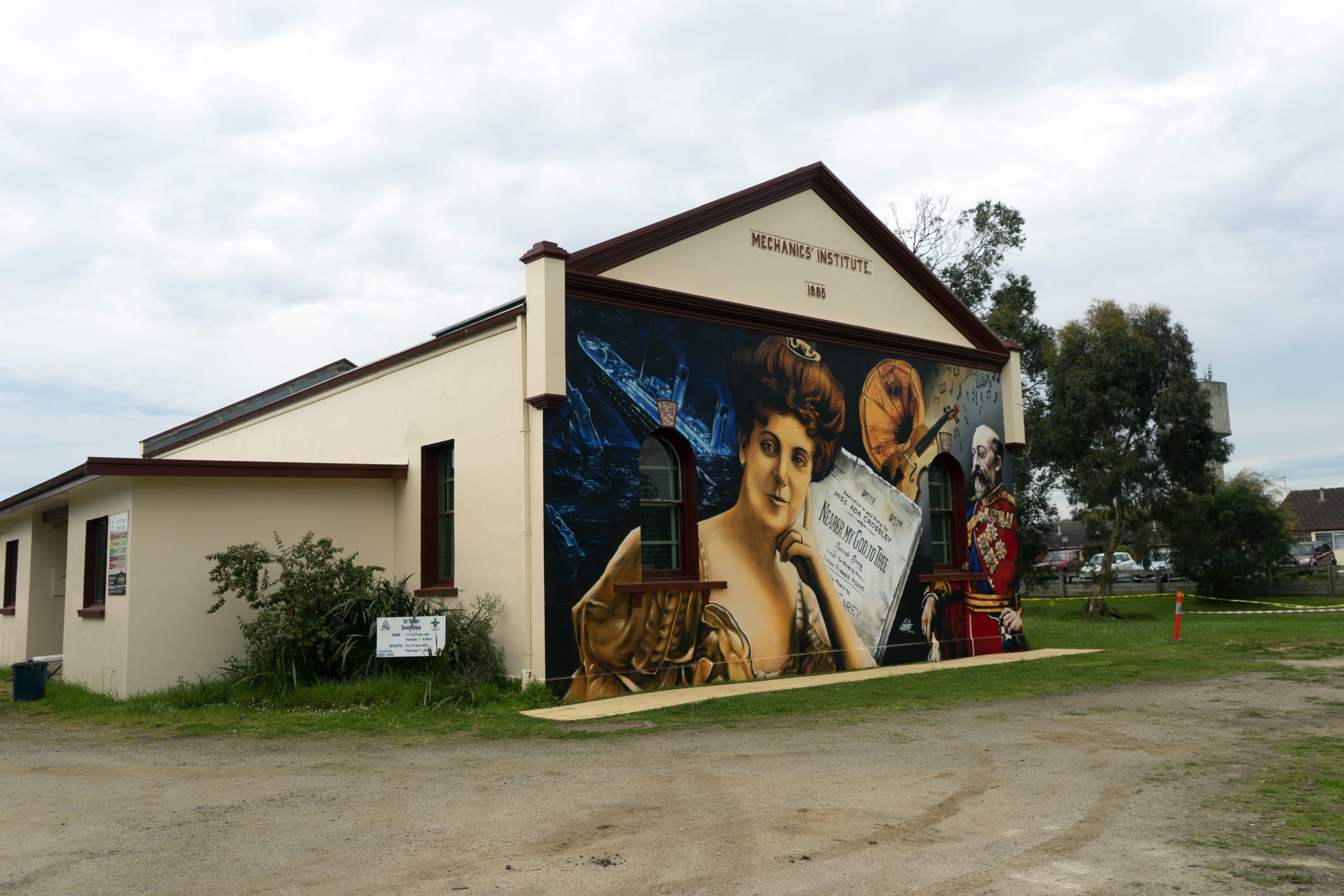 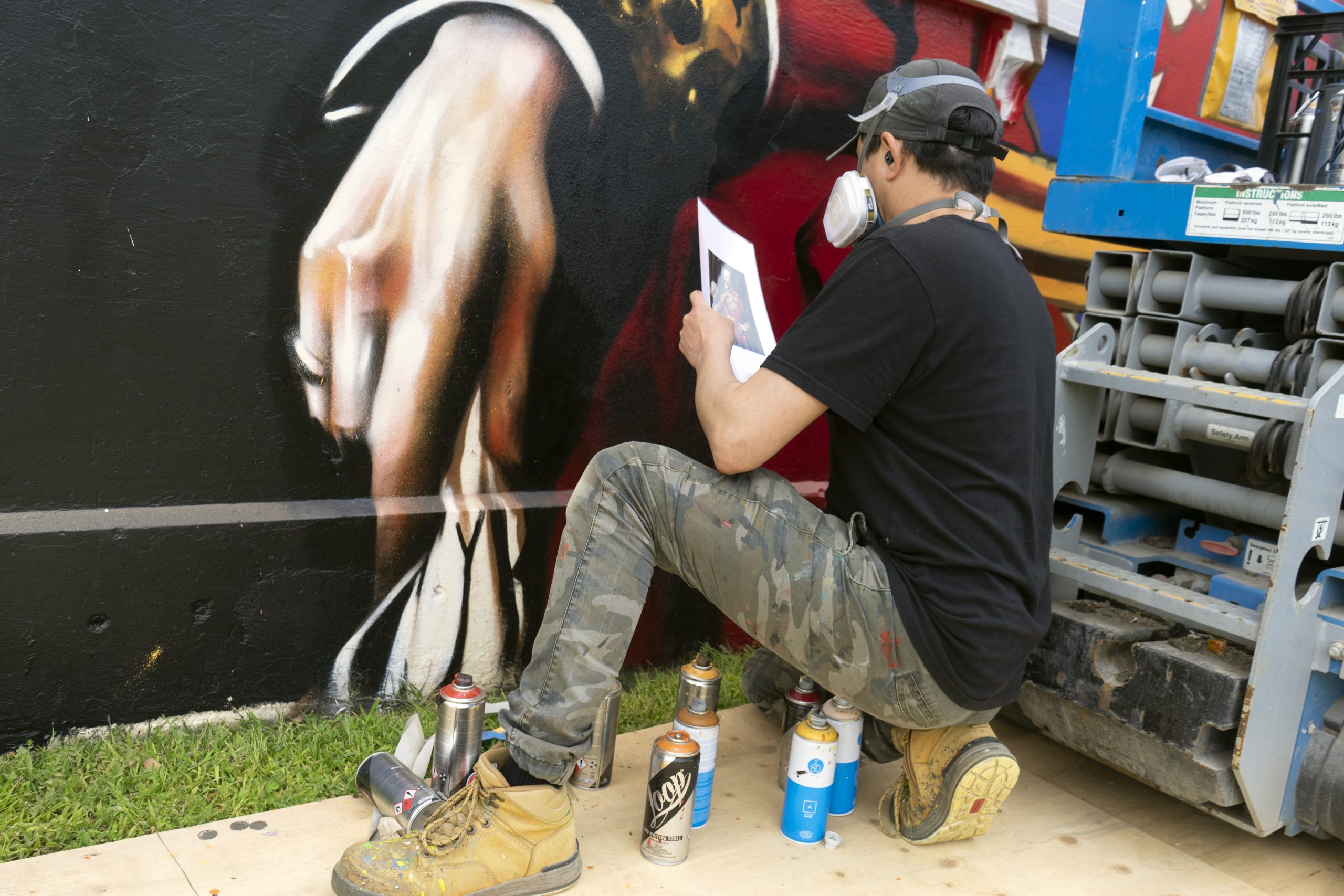 A STUNNING mural on Yarram’s Mechanics Institute is the latest step in an ambitious project to revitalise the town’s economy through local initiatives.

Rather than wait for government agencies, tourism bodies like Destination Gippsland or the Wellington Shire Council to promote the town, a small group of locals has formed a not-for-profit incorporated body to stimulate visitor interest.

All murals across the district have been funded privately, usually by the property owners, but this one, on a publicly-owned building, the Ada Crossley mural, has been completely funded by Eric Greenaway.

Wellington Shire Council assisted in gaining permits and approval for the painting on the heritage-listed building.

Like all the other murals, this one has been conceived and designed to mock-up stage by Wayne Tindall, with Heesco converting the mock-up image into a larger-than-life representation with spray cans.

Another seven or eight murals are planned, along with a dedicated app detailing mural locations, their back stories and videos highlighting the making of the murals.

Also included on the app will be places to stay, eat, visit and enjoy in and around the Yarram district.

There are hopes for a calendar, a booklet, a coffee table book and ultimately a street art and art festival for the town.

Already the project has t-shirts and postcards available from Artichoke Books or The Ship Inn in Yarram and posters from the Bull Bar or The Ship Inn.

Donations to assist in marketing and mural preparations are gratefully received and should be directed to the treasurer of the Friends of Heesco Town, Paul Frost.

The mural on the Mechanics Institute is of internationally acclaimed contralto opera singer Ada Crossley, who was born at Tarraville, near present-day Yarram, in March 1871.

The daughter of Edward Wallis Crossley, an ironmonger, and Harriette (née Morris), Ada was taught by her mother until the age of seven, and then had piano tutelage under Mrs Hasting at Port Albert.

Until the age of 15, she played the organ and led the singing at Tarraville Christ Church and in other local parishes.

Having undeniable talent, she travelled to Melbourne to study pianoforte with Albert Zelma, and then singing lessons with Madame Fanny Simonsen – two world-class musicians based in Melbourne.

Her fame soon climbed, and she debuted as a professional contralto opera singer in November 1889, giving a series of famous ‘Promenade Concerts’ with the Melbourne Philharmonic Orchestra and became the principal singer for ‘The Australian Church’.

During her returns to Tarraville on holidays, Ada would often perform in the Mechanics Institute in Yarram and other local venues.

Her 1890 performance in the Mechanics Institute was reported on in The Standard, which enthused: “for quality of and depth of voice correctness of musical intonation and expression and rich pathos throughout the fair songstress has no compeer on a southern platform”.

After meeting Dame Nellie Melba, and reducing her to tears with her performance, Melba recommended Ada to the best operatic vocal tutor of the time – Mme Marchesi in Paris.

From 1896, she carved a significant career as a contralto in oratorio and ballad concerts.

Ada had a repertoire of more than 500 songs, ranging from Gluck and Handel to Richard Strauss, and she sang in English, German, French, Italian, Norwegian, Danish and Russian.

In 1898, she sang before Queen Victoria, the first of at least five private performances, and soon became a royal favourite, singing at many ceremonial occasions as a requested soloist.

She made several successful tours of many countries in Europe and South Africa, as well as in the United States, New Zealand and Australia, in 1904 and 1908, returning to sing locally each time.

Following her 1908 Yarram performance, she travelled to Sale to perform with her piano accompanist, famous composer Percy Grainger, opting to walk the 75 kilometres – lunching at the Giffard West Royal Mail Hotel, before crossing the Longford Swing Bridge designed by Percy’s father.

However, she withdrew from public life after this time.

After a memorial service at All Souls, Langham Place, she was buried in St Marylebone cemetery, East Finchley.

THE images on the mural reference several significant events in Ada Crossley’s career.

While in New York, she played Carnegie Hall and made the first gramophone record for the Victor Company ‘Red Seal’ label.

When in 1910, King Edward VII passed away, it was Ada that the royal family chose as the soloist to sing at his funeral.

More than one million people came to view the funeral procession and 11 carriages of ruling heads of state of the world followed the funeral carriage.

During the service, Ada performed to more than nine sovereign heads of state, who ruled over most of the known world, 36 crown princes and other territorial heads of state, including the USA’s President Roosevelt.

In 1912, HMS Titanic sank on its maiden voyage from Southport, to New York, USA, carrying 2208 passengers, of which only 1503 survived.

On that voyage were eight band members, chosen to play the hits of the day.

After hitting the iceberg, these brave men picked up their instruments and played songs from their repertoire when everyone else was rushing to the lifeboats.

Survivors in the lifeboats agree the last song they heard played was Nearer My God To Thee as the ship went down.

It was recognised by survivors as a song made popular by Ada in her numerous world tours.

This was corroborated by the discovery of the floating violin cases of the band leader – Wallace Hartley and first violinist, Jock Hulme at the foundering site.

These cases contained the sheet music arranged by Lewis Carey and made famous by Ada.

Ada was the only vocal soloist invited to perform at the Titanic Memorial Concert held a short time later – Empire Day, May 24 1914 – at Sir Royal Albert Hall.

This was a public holiday and huge crowds gathered in their thousands to watch and listen. She sang in front of 7750 royalty, dignitaries and stewards.

The afternoon ended with the auditorium: “Rising as one to reprise Nearer My God To Thee.”