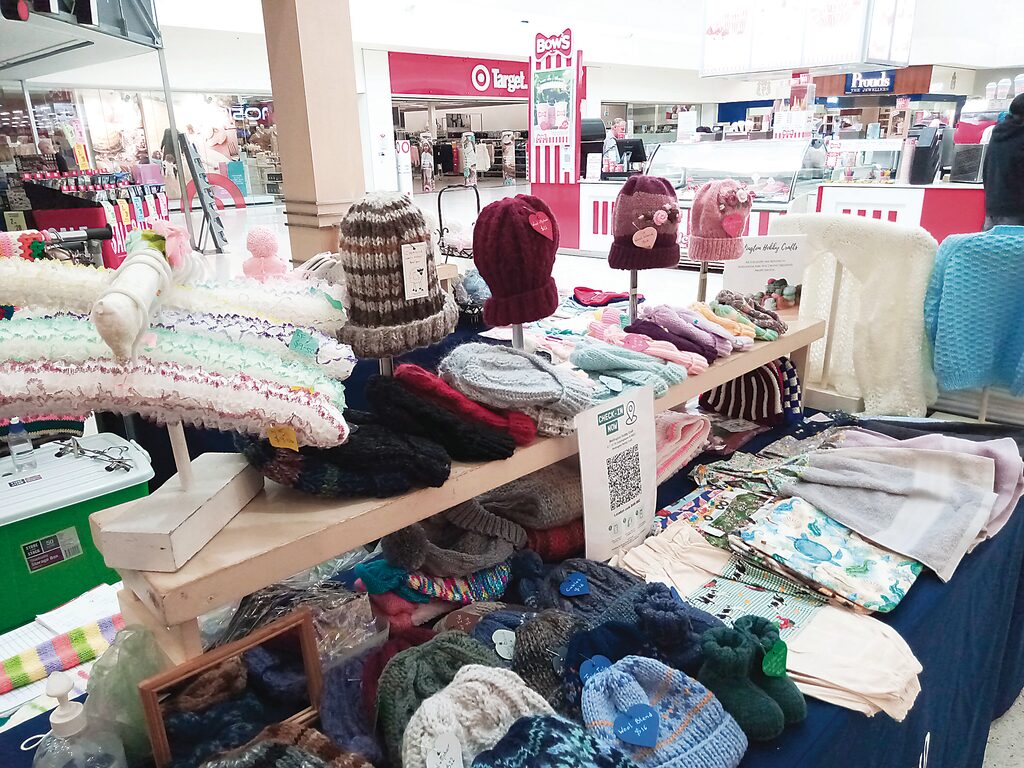 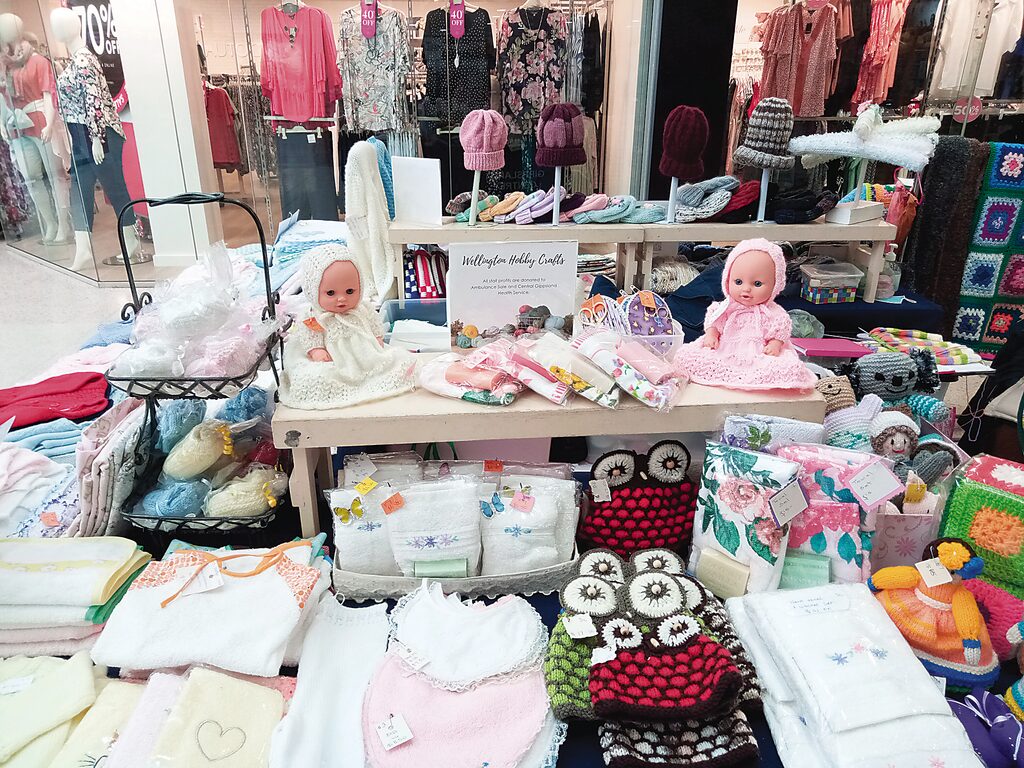 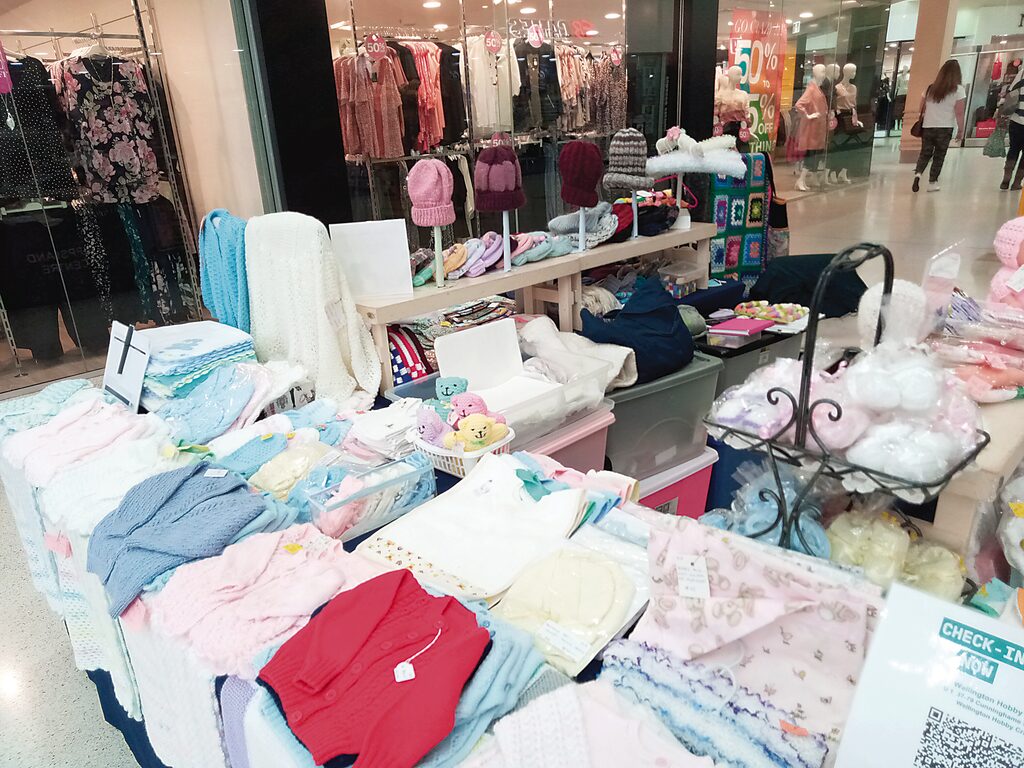 Visit the Gippsland Centre late in the week, and chances are you’ll find a humble stall selling knitted clothes and other woollen homewares.

This is the stall of Wellington Hobby Crafts, a local organisation that donates its time and profits to the region’s frontline workers.

Most weeks, the stall and its goods are overseen by Lorraine and Dawn, two dedicated handcrafters and stalwarts of the crafting group.

Lorraine has been part of the group for 10 years, while Dawn has spent 16 years with the group.

Both ladies spend the majority of their time knitting babywear, which draws more sales than any other kind of garment at their stall.

“Because we no longer have a baby shop in Sale, we sell heaps of baby things,” Lorraine told the Gippsland Times.

Among the other items available at the stall are jumpers, shawls, beanies and knitted toys.

Most of the wares are made by a group of six “lady crafters” from Wellington Hobby Crafts, with the occasional item donated by the public.

Although it generates plenty of interest, the amount of people browsing the stall has lowered in recent times, as the ladies note.

“At the moment it’s quite slow,” Lorraine said.

“I think it’s got a lot to do with COVID – there doesn’t seem to be as many people around.”

Dawn concurs, adding: “We used to have bus trips in.”

“A coach would come in with visitors, and they’d go berserk!”

Most people who visit the stall are returning customers, who come from as far afield as Yarram, Traralgon, Bairnsdale and Melbourne to buy goods, and with good reason.

As Lorraine remarked, “there’s nothing like this close to Melbourne.”

It’s not just physical wares that the stall offers either, with the ladies also assisting people with their own knitting, or mending items of clothing for a small payment.

But the money they collect is never for their own benefit, since any and all profits made by the crafters are given to the region’s health services – half to Central Gippsland Health, and the other half to the Sale Ambulance Station.

Contributing to the latter is something the crafters began to do only recently, having previously donated solely to the local hospital.

It’s a move that was championed by Lorraine, who views paramedics as the “first port of call before you even get to the hospital.”

“We’ve all had to have the ambulance for something with somebody,” Lorraine said.

The local ambos have already benefitted from the crafters’ donations, using the money to purchase a heart monitor.

“If people are in a car accident, and they’ve got severe injuries to elsewhere, this machine keeps the heart beating so that they’ve got an extra pair of hands to work on the person that’s been involved in the accident,” Lorraine said of the device.

“I was just rapt over that.”

While Dawn and Lorraine are both not-too-keen on being photographed, they are always up for a chat, with that latter highlighting the communal nature of their work as a reason they continue with the stall.

“It’s a fantastic social thing – we’ve met so many lovely people in here.”

The Wellington Hobby Crafts stall can be found outside Sanity in the Gippsland Centre on Thursdays and Fridays.