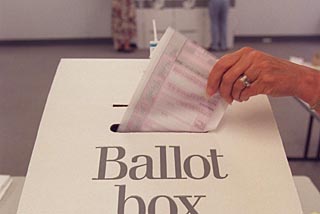 THE go ahead for East West Link and the Port of Hastings projects regarded by Gippsland industry and local government as vital for the region’s future are on the line at this Saturday’s state election.

The two projects, which are strongly backed by the Coalition Government but opposed by the Labor Opposition, are both priorities for the Committee for Gippsland and the Gippsland Local Government Network.

C4G chief executive, Mary Aldred, said millions of tonnes of freight went in and out of the region.

“We need competitive, efficient access to markets,” she said.

Much produce came from Gippsland, but this was often packed on the other side of Melbourne, hence the need for better road access.

Having the next port at Hastings, on Gippsland’s doorstep, would be a great advantage for the region, she said.

Ms Aldred stressed that C4G had enjoyed excellent access to both government ministers and the Opposition shadow ministers.

“They have given us a very fair hearing,” she said.

Narracan MLA , Gary Blackwood, who is also the parliamentary secretary for transport, said East West Link, would provide a much needed across-city alternative to the M1 and West Gate Bridge.

“It will be an enormous productivity and efficiency boost for Gippsland businesses getting their produce to market — in particular the Epping wholesale market, Tullamarine airport and the Port of Melbourne,” he said.

“In the eastern section of East West, around 23 sets of traffic lights will be removed from the system, reducing travel times from the east to Tullamarine by at least 35 minutes.

“The western section of East West will provide a second river crossing as an alternative to the West Gate Bridge, providing much more reliable travel times for Gippslanders to Geelong and Ballarat.”

The Shadow Minister for Ports, Freight and Logistics Natalie Hutchins said Labor’s position on the East West was clear.

“Under Labor this tunnel will not go ahead,” she said.

“The body will investigate all matter of projects as they are put forward,” she said.

Ms Hutchins said Gippsland, particularly the Latrobe Valley, would not be disadvantaged by Labor’s policies.

“Labor has a plan to reinvigorate the Latrobe Valley, as we refuse to believe its best days are behind it,” she said.

“We’ll invest $10 million to develop the Gippsland Logistics Precinct in Morwell, creating over 150 jobs. We’ll also rebuild local schools and open a tech school to give our kids the best start in life.”

More would also be spent on Gippsland’s roads from a $1 billion regional roads fund.

It was a natural deep water port, and thanks to the vision of former Liberal Premier, Sir Henry Bolte, there was 3000 hectares of land zoned in and around the port.

“With the development of the intermodal hub at Lyndhurst, freight from Gippsland can be easily moved to Hastings on rail via the Lyndhurst facility,” he said.

“This will provide efficiency gains and reduce the amount of freight currently going to Geelong, Altona and the Port of Melbourne by road.”

Mr Blackwood said an enormous side benefit for Gippsland with the Hastings development would be the need to build a third dedicated rail line from Dandenong to Dynon to help move freight by rail.

“This line will also be used by Gippsland passenger and freight trains. This will remove the current impediments in the rail system for V/Line trains once they hit the metro rail system,” he said.

Ms Hutchins did not specifically comment on whether Labor would continue with the Coalition’s plan to build a third rail line between Dandenong and the CBD.

‘”Labor has a plan to remove 50 of the most deadly and dangerous level crossings, many of which are on the Dandenong line,” she said.

Under the Coalition’s $2.5 billion upgrade of the Pakenham-Cranbourne line, four crossings will be removed and another four planned for removal.

Labor’s preferred location for the next port is at Bay West near Geelong mainly because of the western region’s established road and rail freight networks.

Latrobe City Council earlier this year reaffirmed its commitment to Hastings, which is also backed by Shipping Australia, the peak body for the shipping lines that bring international trade to and from Australia.