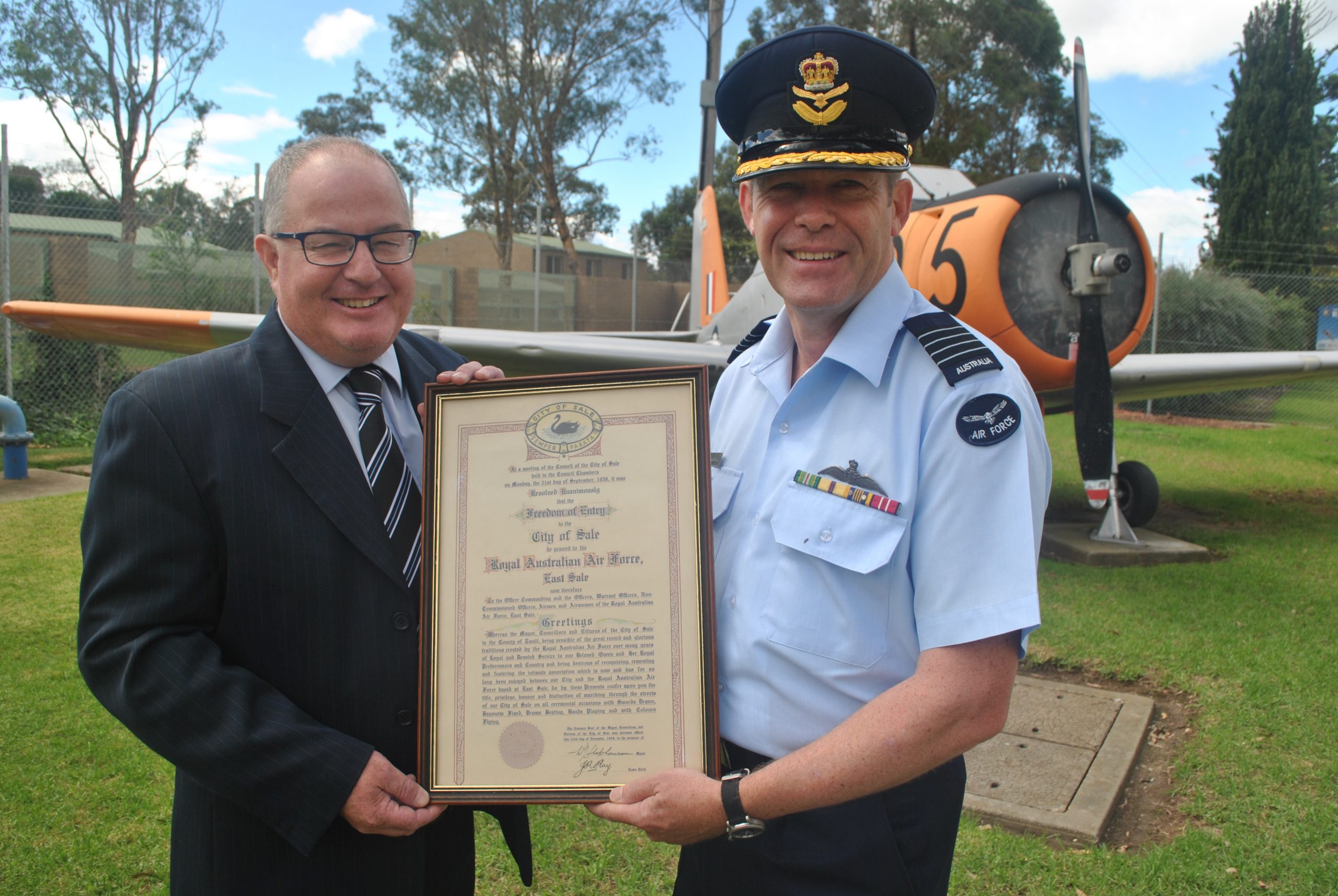 WELLINGTON Shire residents and visitors alike will have the chance to see RAAF Base, East Sale, exercise its Freedom of Entry to the City of Sale on April 8.

Mayor Darren McCubbin said he was delighted the RAAF would be marching through the centre of Sale exercising this right for the first time in more than a decade.

In 1959, City of Sale Council bestowed a Freedom of Entry to the City document to the base for the first time in recognition of the area’s ongoing mutual relationship.

A flypast of locally based aircraft will herald the beginning of the parade which will involve about 200 Air Force personnel and the Air Force band marching along Raymond St.

In accordance with tradition, a senior member of the local constabulary will then challenge those entering the city, asking “Halt, who comes here?” at the half way point.

“When challenged by our local police, senior Australian Defence Force Officer Group Captain Mark McCallum will present the scrolled document giving RAAF the Freedom of Entry to the City, enabling the parade to enter and proceed and salute those on the dias at the clock tower,” Cr McCubbin said.

He said RAAF Base, East Sale, continued to be a major part of the fabric of Sale’s history and was an important part of the shire’s future.

“Recent and future growth at the base is a boost not only for our local community, but for the greater Gippsland region and the state of Victoria,” he said.

“Freedom of the City clearly demonstrates the high esteem and respect the community of Wellington Shire holds for our locally based armed forces.”

Group Capt McCallum said the base was looking forward to exercising its rights to the city.

“RAAF Base, East Sale, is proud to be part of the Sale and greater Gippsland communities and values the close relationship that has formed over many years,” he said.

“Freedom of Entry to the City of Sale is a privilege that we value greatly and an opportunity for the base and its personnel to be on show for the community.”

According to Air Base executive officer, Wing Commander Martin Quirke, the march has ancient roots, beginning in medieval Europe when cities were walled.

The key part of the parade is the invitation from the council to the Air Force.

“It symbolises co-operation and mutual respect that the city has for the base, and the base has for the city,” he said.

RAAF will celebrate its 95th birthday this Thursday.