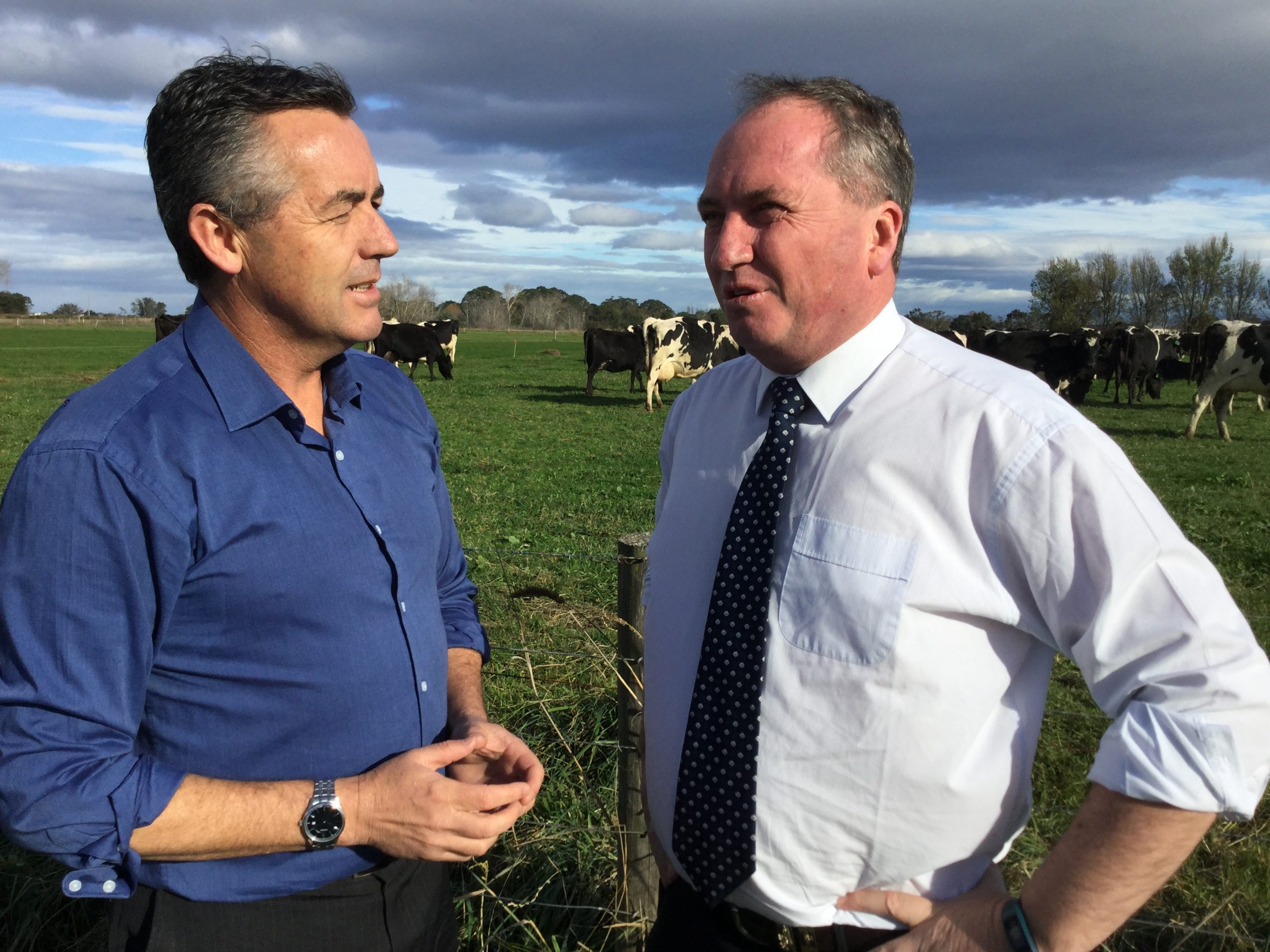 The representatives were able to inform both Mr Chester and Deputy Prime Minister and Agriculture Minister Barnaby Joyce about the issues facing Gippsland farmers.

Mr Joyce said he was open to working closely with his Labor counterpart, Joel Fitzgibbon, in extending support loan criteria.

“We’ve changed the criteria, and we’ll continue to work on farm household allowance to get a payment through to these mums and dads, so they can get themselves through this crisis,” he said.

“That’s why I’m making sure that today, I’m doing everything in my power to assist these people on the land, these dairy farmers who do so much for their own local communities.”

Two of the farmers who attended the meeting with the ministers, Graeme Anderson and United Dairyfarmers Victoria local president Brad Missen, agreed that while they were happy with the government response so far, it was limited in what it could do.

Mr Anderson said the priority would be getting through the season for most farmers.

“The only one thing that’ll fix the industry is better returns,” he said.

A major issue is retaining employees, with many farms stretched to breaking point.

Mr Missen, from Denison, said that farmers needed to examine their entire business with a clear head.

“There’s lots of smaller tools to help, but getting them together for people is the hard part, especially when people are stressed.”

Yesterday, farmers rallied in front of Murray Goulburn’s Maffra production plant in support of the company.

“Basically the farmers are in support of the direction of the company and the board,” he said.

However, some farmers are unsure if extra loans will help in the long term.

Already, the announcement of changes to the Fonterra pricing system will result in milk prices rising in the short term, but result in farmers being locked in to paying money back in the medium term.

Dairy farmer Matt Bechaz said that even with the price rise, Fonterra’s payment is still far below the expected price.

“We’re funding our own relief package,” he said.

ANZ bank has announced a package for farmers, that would suspend loan repayments for up to three months and waive fees for restructuring business loans, among other measures.

Mr Chester said that there was light at the end of the tunnel, but the industry had to survive the current downturn.

“There is a growing demand for dairy around the world and we have negotiated three Free Trade Agreements which will benefit local producers in the years ahead,” he said.

“But that doesn’t help us with the immediate problem and it’s important we work together as a community to support each other at this difficult time.”

Announced by premier Daniel Andrews on Friday morning, Lifeline will receive more funding and 750 people will be trained in mental health first aid.

“Farmers are resilient and proud people, but we know that even the most resilient need support during these difficult times for the dairy sector,” he said.

Tactics for Tight Times meetings will also be held around the district this week, including on Friday from 10.15am at the Yarram Uniting Church and May 31 at the Bruthen Pub from 10.45am.

The meetings will focus on developing individual farm plans and examining options, as well as providing a space to air grievances and touch base with other farmers.

The local public forum, according to Mr Chester, would involve representatives from support agencies and the dairy industry, to ensure families are aware of the help that is available to them if they need it.

It will be held on Thursday at the Maffra Football Club rooms from 11am.