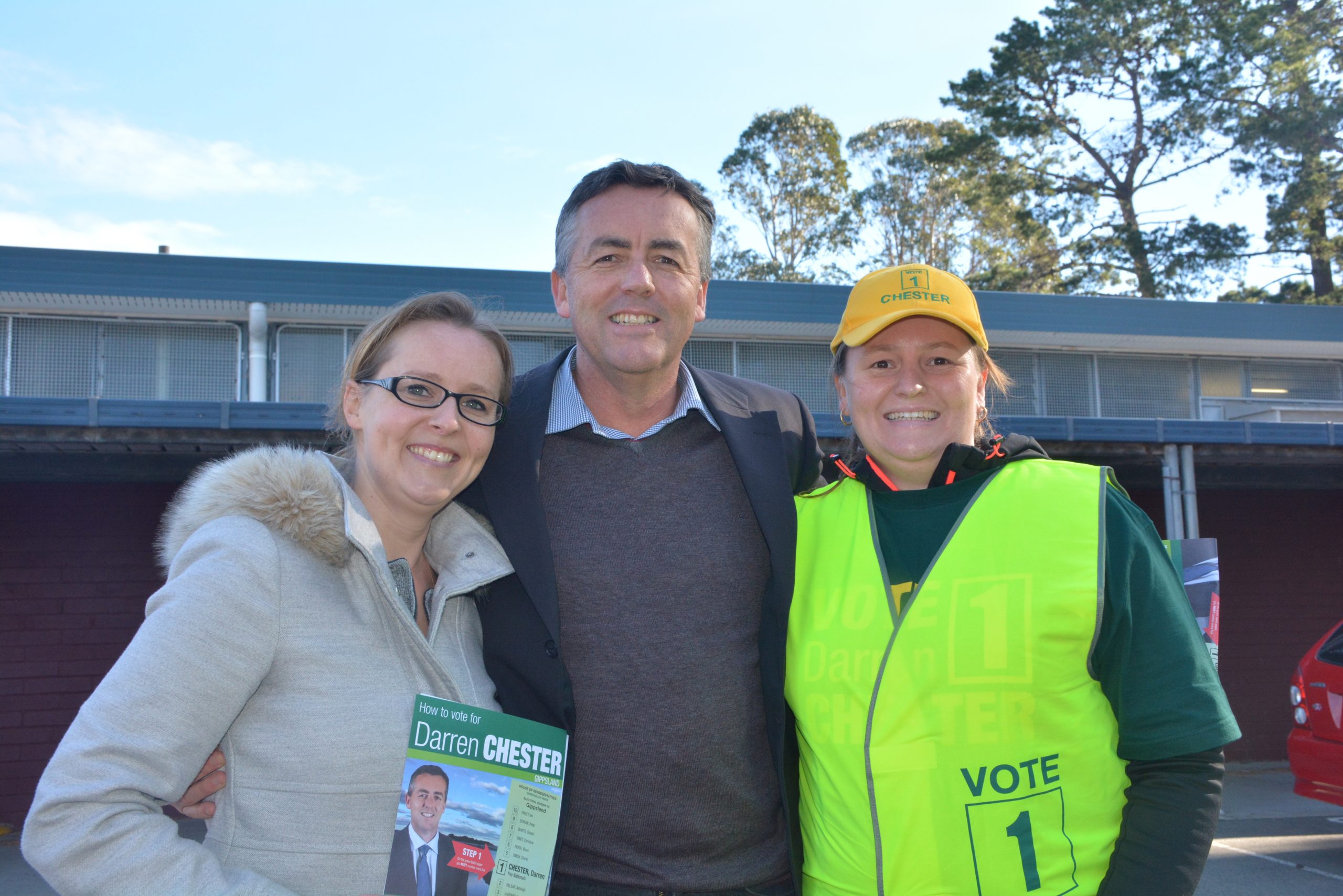 Incumbent Gippsland MHR Darren Chester has won his seat in the federal election, with an almost three per cent swing in his favour.

Mr Chester focused much of his campaign energy on the west of the electorate, where there are traditionally a higher proportion of Labor voters.

The swing in his favour will further strengthen the Infrastructure and Transport Minister’s position in his party.

Labor’s fortunes were not helped by the withdrawal of candidate Carolyne Boothman, after she discovered she would have to resign her job as a teacher to stand (employees paid from the public purse must resign if nominating for the House of Representatives or Senate).

She was hastily replaced with Latrobe Valley accountant Shashi Bhatti, who was little known in the east of the electorate.

At time of writing, Mr Chester won 57.1 per cent of first preferences, while the ALP’s Shashi Bhatti won 20 per cent.

The Greens’ Ian Onley won 7.5 per cent, followed by the Liberal Democrats’ Ben Buckley on 4.5, Family First’s Brian Heath on 3.5, and independent Cherie Smith on 1.8.

Voting at his former high school with his sisters and son, Mr Chester said he was looking forward to doing more for Gippsland.

He said he was indebted to his family and hardworking staff and volunteers.

“I would like to thank them all for their ongoing support and encouragement,” he said.

“I would also like to thank all of the other candidates for the professional and respectful manner in which the campaign was conducted locally.

“While Labor at a national level was scaring Australians with a misleading fear campaign on Medicare, the campaign in Gippsland was positive and a credit to all involved.”

The actual result of the election nationally remained somewhat in doubt at time of writing, with a hung parliament the assumed outcome after several seats changed allegiances.

Deputy Prime Minister and leader of the Nationals Barnaby Joyce held his seat, while independent Cathy McGowan was able to hold off a challenge from former Liberal MP Sophie Mirabella in Indi.

Pre-poll and postal votes are still being counted, which could change the results for many seats, including several on a knife-edge in inner Melbourne that the Greens have performed well in.

“Regardless of the final outcome, I’m determined to keep delivering results for the region I love,” Mr Chester said.

“I’ve been elected to represent all Gippslanders and I will seek to unite our community and work with other levels of government to deliver the infrastructure and services we need to make our region an even better place to live, work and visit.

“There’s no time to waste; the work starts today and I’m looking forward to the challenge.”

Labor candidate Sashi Bhatti estimated the CFA issue cost him between 2500 to 3000 votes.

He also conceded that the disruption in the lead-up to the election with Carolyne Boothman withdrawing, him not being well known in the electorate, the short time frame and limited resources he had to campaign had all been contributing factors to Labor’s reduced vote in Gippsland.

His work as an accountant leading into the busiest time of the year also limited the amount of time he could devote to campaigning.

Given those factors, Mr Bhatti was reasonably satisfied with the result.

“I would consider having a crack at it again and I’ve learnt a few things along the way.

“People start to know you.”

Mr Bhatti thanked those who supported him.

“This was my debut into politics,” he said.

“I came in with four weeks left of the campaign and on Saturday more than 2700 people trusted me with their vote, representing 3.5 per cent.”

Mr Heath said he had been overwhelmed with the support he had received from voters and volunteers who helped with his campaign.

“I would like to congratulate sitting member Darren Chester for a convincing win and wish him the best of luck for the term ahead,” he added.

“I am looking forward to continuing to build Family First in Gippsland as a viable alternative for conservatively-minded voters into the future.”

In neighbouring McMillan, the Liberals’ Russell Broadbent was returned with 56 per cent of the two party preferred, despite a 5.9 per cent swing against him towards Labor’s Chris Buckingham.

In the Senate, results will likely take until the end of the month to be fully counted.

The Greens and Derryn Hinch will take seats, while the Motoring Enthusiast Party’s Ricky Muir will struggle to reach a quota and retain his seat.

Far-right One Nation leader Pauline Hanson has also made a return, after snaring a Queensland Senate seat.

Her party could collect a second Queensland Senate seat, along with a possible seat each in New South Wales and Western Australia.

The Gippsland electorate has been a Conservative seat for more than a century.