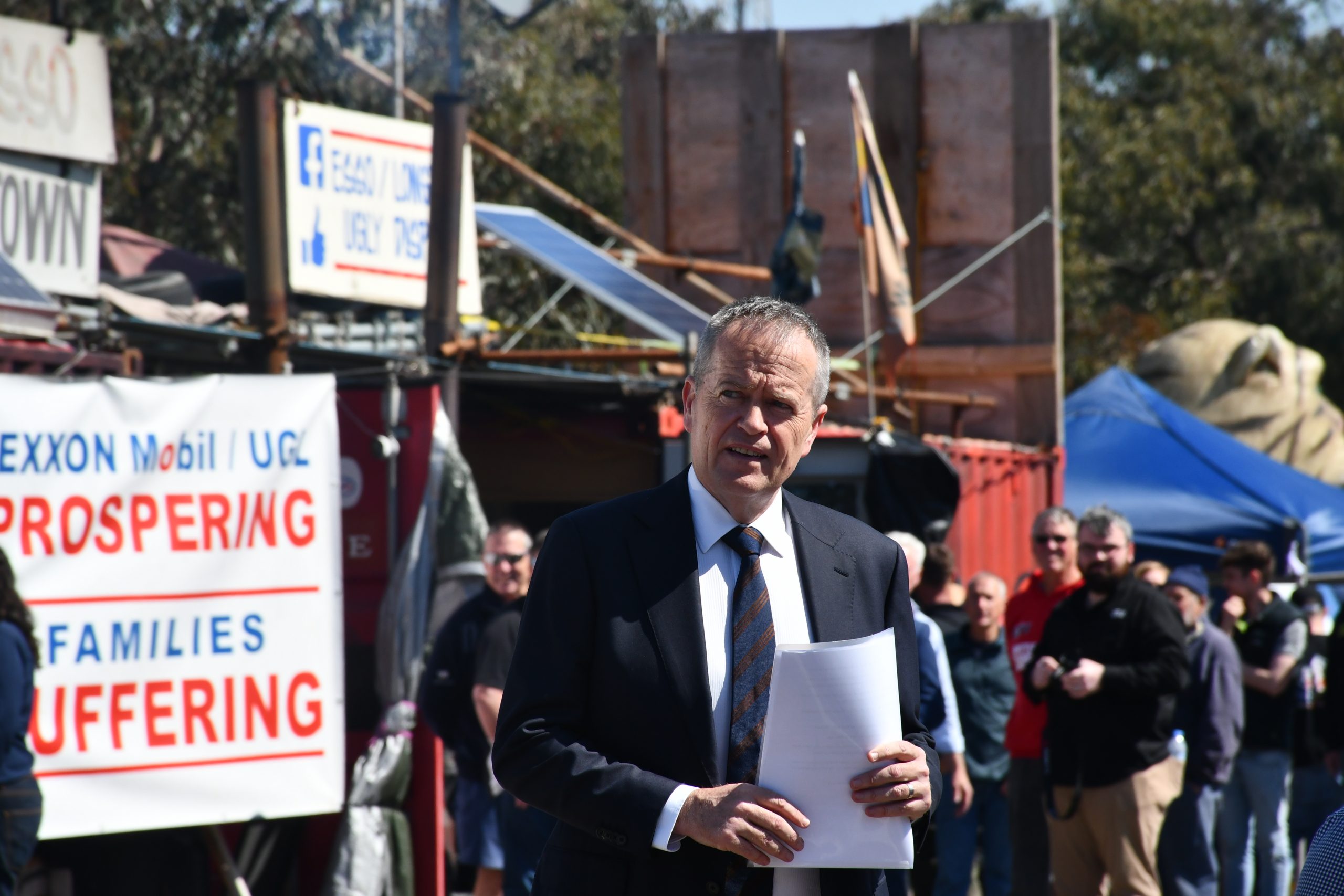 At a service commemorating 20 years since the disaster at the Esso Longford Gas Plants, Mr Shorten said if elected, his government would change the rules.

“I don’t have a simple solution for the dispute, but what I will say, in honouring those who passed, those who rebuilt, and those who still count the cost, and of course their families, is that you are not forgotten, I have never forgotten you, and if I am privileged to form a government, I will not forget you then either.”

Mr Shorten described it as a “catastrophic event”, and noted parallels to the current dispute.

“I was a union rep at the time, and my job was to help make sure the operators and the workforce didn’t get blamed for the explosions,” he said.

“At that time, Esso, part of the global conglomerate Exxon, made a terrible error of judgment — they blamed operators, and said the operators were the reasons for this terrible series of explosions and fatalities.

“That wasn’t the case, and it (took) a coronial inquest, a Supreme Court hearing, and indeed a Royal Commission set up by then premier Jeff Kennett, (but) the workforce were exonerated, as they deserve to be.

“Now again, it would appear that this global conglomerate’s forgotten the lessons, the importance of working with the workforce …”

Mr Ward, who was one of the workers blamed by the company, said what followed from the explosion was “shameful”.

“Internal investigations implicitly said that (Esso), through organisational failure, had set in sequence a chain of events that had caused the loss of those lives, the injuries, the trauma, and the failure to supply gas to the state of Victoria for a period of two weeks,” he said.

“Among other things, they said that Esso, subsidiary of ExxonMobil, the largest company in the world, should be prosecuted under workplace health and safety legislation, and in a court case, in front of a jury of 12 people (that) heard all the evidence, they heard all the arguments from your employer, and they determined that it was guilty of failures on 11 counts of workplace health and safety.

“They were fined a maximum penalty at the time of $2.75 million for those breaches.

“As Bill Shorten quoted on the steps of the Supreme Court, it was the equivalent of a corporate speeding ticket, yet to this day, that $2.75 million is the highest fine ever handed to a corporation for a breach of health and safety laws.”

Mr Ward said the company had never apologised. “I’m reminded of a statement by the then-head of country for Esso Australia, Robert Olsen, who was the most senior figure for the company, and he made a statement after the findings for the Royal Commission were announced — in actuality, it was at a bravery awards ceremony for the employees,” he recalled.

“He made a statement to the media that he would consider the findings of the Royal Commission and then make a statement.

“It’s been 20 years and I still haven’t heard a word, so I’m finding it difficult to reconcile the fact that an organisation like Esso, or ExxonMobil, has elected to take a path publicly … and never apologise to its workforce.”

The effects of the day were still being felt, and Mr Ward added he stayed in contact with survivors. Being able to talk about the incident freely was “cathartic”.

“I have the privilege of not being an employee anymore, and I’m able to speak freely,” he said.

The casualisation of the maintenance contractors, including those at Esso, could lead to more serious incidents in the future, he warned, and other workplaces could be affected.

“They’ve disadvantaged workers to the extent that in some very dangerous workplaces, those workers are fearing for their lives.”

TODAY marks the 20th anniversary of the Longford accident in which two of our colleagues died and eight others were injured.

That explosion and fire on September 25, 1998, also caused extensive damage to Longford plants and cut off gas supplies to homes and businesses across the state.

This was a deeply distressing event for everyone associated with our Gippsland operations, myself included, and it caused widespread disruption and hardship for many people across Victoria and elsewhere.

The damage to our facilities was soon repaired, gas supplies were restored and the broader community eventually recovered.

However, there are many people who will never fully recover from the Longford accident, particularly the families and friends of John Lowery and Peter Wilson and those who were badly injured.

My thoughts are with John and Peter and their families on this anniversary.

For me the Longford accident is a painful reminder that safety and operations integrity is always profoundly personal.

It’s about protecting those around us, people we greet and work with day in day out and socialise with — people that we often take for granted.

In the months leading up to September 25, 1998, we had every reason to be proud of our safely performance.

Our performance in 1997 was a record for the company in terms of safety and we were working hard to try and improve on it.

We were pursuing our goal of ‘Nobody Gets Hurt’ with real determination.

Then suddenly on a sunny Friday in spring, our world was turned upside down.

The reality is, we can never be satisfied with our safety performance. Complacency is our enemy.

Therefore, on this anniversary of a very sad day in our history, I ask that today you pause for a moment and remember our colleagues and think about what we can do together to improve our safety and the safety of all those close to us.

For more on the 20th anniversary of the Longford disaster, read Tuesday’s Gippsland Times.