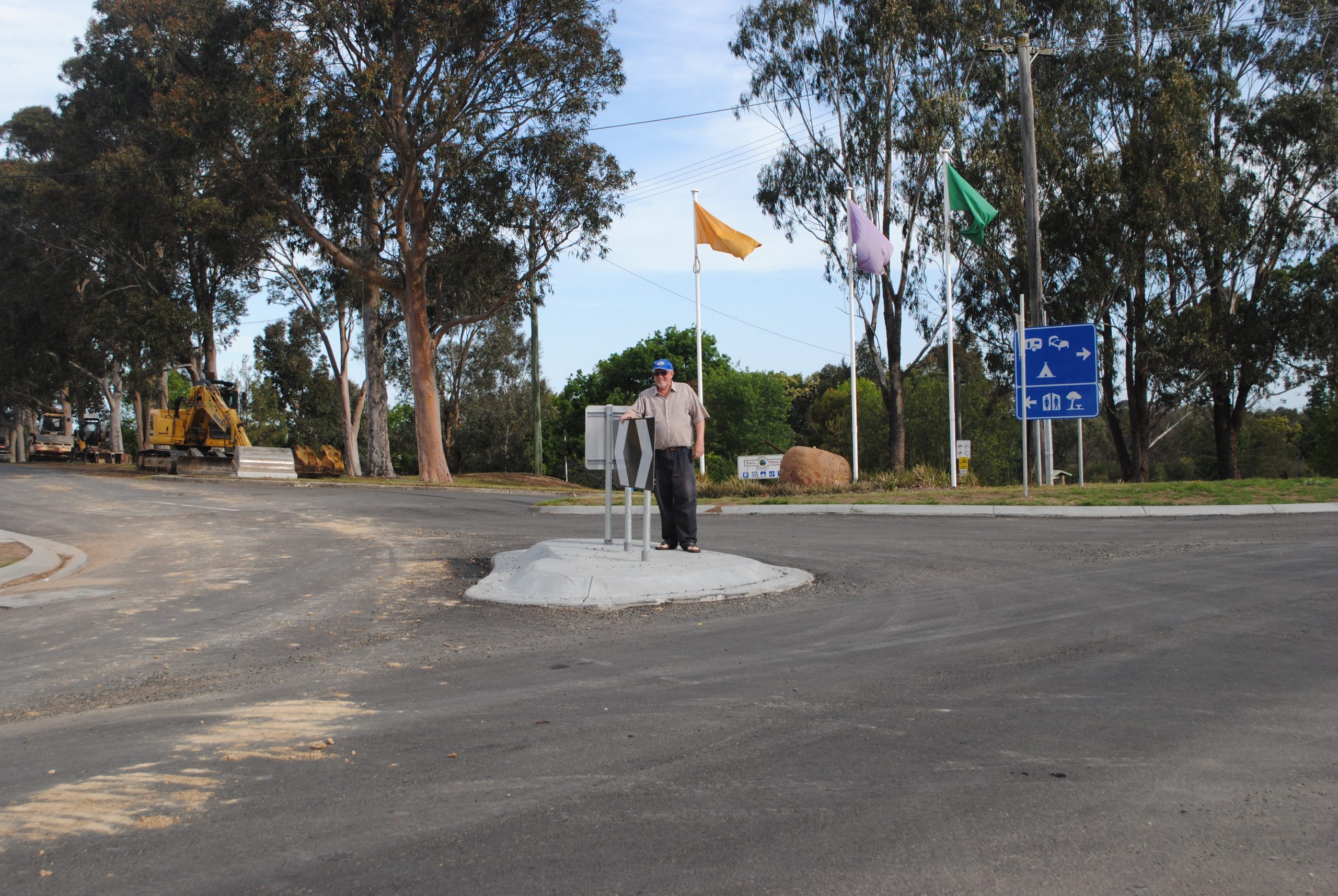 WORK on the roundabout at Stratford’s western entrance resumed last week after it was interrupted when a water pipe was “identified” under the road.

It is believed work came to a standstill — delaying progress and causing headaches for businesses and residents — while plans were made for the pipe’s relocation.

A Gippsland Water spokesperson confirmed the water main was identified during works.

“During construction of the new roundabout it was identified that an existing water main needed to be relocated,” he said.

“This has now been completed, and the roundabout works have resumed.”

The road works have affected traffic flow and business operations through Stratford for almost two months, locking traffic speed at 40 kilometres per hour and robbing the town of about 25 permanent car parks.

Long term resident Ray Veal, who owns the vacant block on the corner of McMillan and Tyers Sts, said he had lost 17 car parks along the main street, alongside the Stratford market site, while eight were lost across the road.

“That’s going to have an impact,” he said.

Stratford Courthouse’s Gavin Roberts conceded the traffic interruptions would have affected businesses at the Sale end of town.

Liz Whitehill from Badger & Hare café said parking had been a problem during the works, but contractors had consulted with businesses “all the way”.

“It’s taken longer than we expected, but Gippsland Water, the contractors and VicRoads have been great — they’ve kept us informed every step of the way,” she said.

“I think what’s affected businesses more are the roadworks between Stratford and Bairnsdale, because drivers just take the back roads to avoid them.”

Although not finished, the roundabout has attracted criticism because of its narrow width and placement.

McMillan St resident Frank Robbins questioned the sense of blocking direct access to Apex Park, a popular rest spot for drivers of larger vehicles and caravans on their way up the coast.

The new road configuration has blocked the righthand turn into McMillan St from the highway, forcing residents and anyone wanting to get to the park to travel further into town and turn back at the new, narrow roundabout.

“That won’t be possible for many larger vehicles, such as trucks or caravans, because the turning circle is so narrow,” he said.

“What that will do is force people who are travelling through Gippsland on their way up the coast to keep driving and not have a break — and that’s dangerous.

“There’s very little parking at Memorial Park, so there isn’t really an alternative any more.”

The roundabout, at the junction of Princes Highway (Tyers St) and McAlister St, is designed to slow traffic as it comes through the town centre.

But Mr Veal accused VicRoads of not listening to residents’ concerns.

He said the roundabout would have been more effective at McMillan St, which had a bigger turning circle, to allow larger vehicles to easily turn left to get to the pool or right to Apex Park.

“But they had made up their minds even before any community consultation, so they weren’t really listening,” he said.

A VicRoads spokeswoman said the roundabout was expected to be completed by Christmas.

She said a road safety audit had recommended removing the right-turn from the Princes Highway into McMillan St.

Drivers instead need to travel about 200 metres further to the roundabout and turn around.

More signs will be installed to direct people to Apex Park.

The Gippsland Water spokesperson said the changed turning conditions were available at two recent information sessions held in Stratford, and were included in flyers delivered to local residents.

“We’re continuing to provide support to VicRoads and their contractors to enable them to complete these works,” he said.