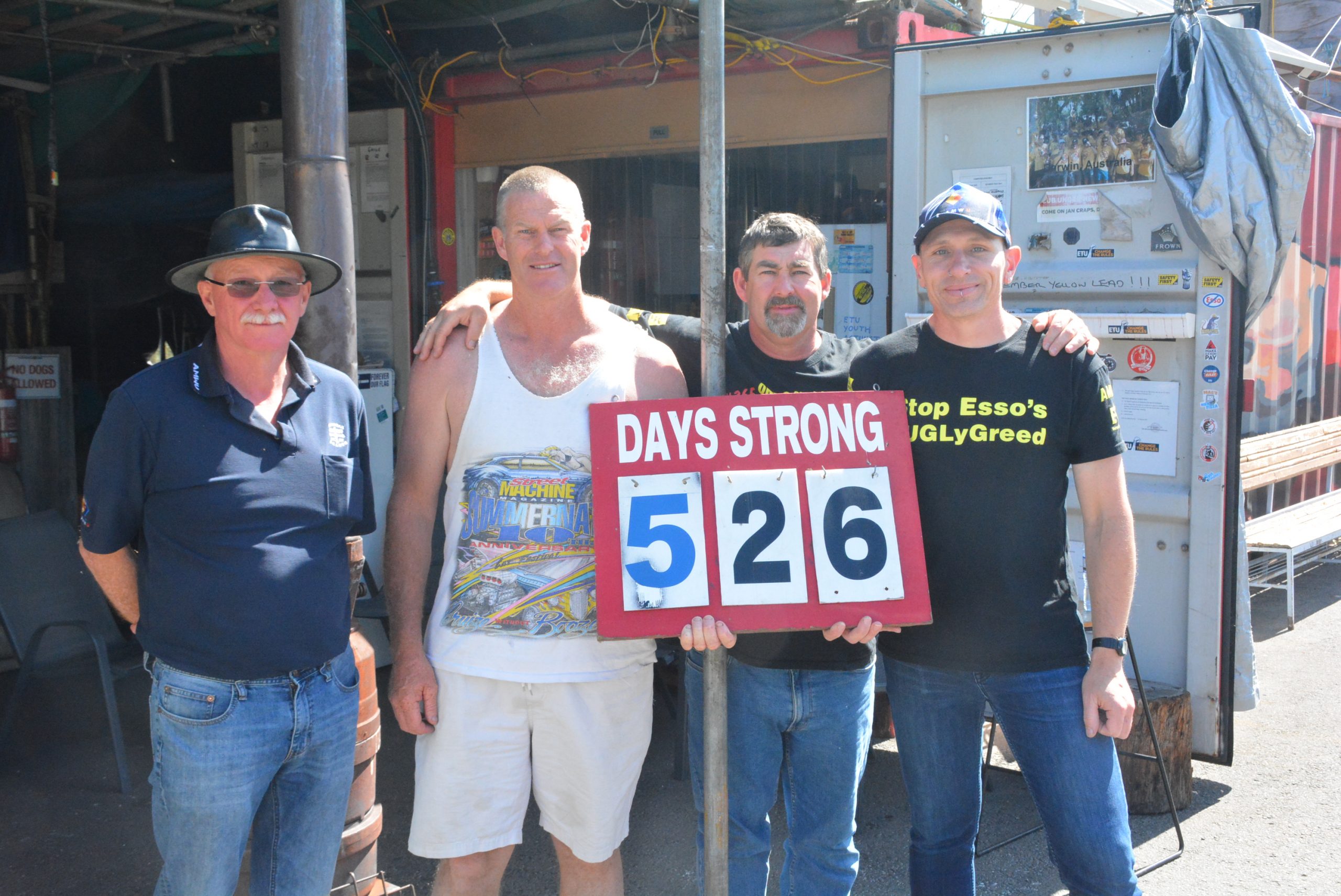 UNION members and former Esso workers manning the 533-day protest camp at Longford have vowed to continue the fight to change workplace legislation, believing the Gippsland issue could become an international test case in industrial action.

The makeshift camp was established by unions near the entrance to the Longford Gas Plants in June 2017 after about 200 Esso maintenance workers effectively had their employment terminated when they refused to sign a new workplace agreement with subcontractor UGL.

Unions accused UGL and Esso of exploiting a legal loophole in the system to undermine wages and conditions, after the new “take it or leave it” agreement reduced conditions and slashed pay by 30 per cent.

Visiting the site at the 12-month anniversary earlier this year, Australian Council of Trade Unions secretary Sally McManus told former maintenance workers who took a stand against the unfair agreement they were “heroes”.

She said the campaign was the longestrunning industrial dispute in more than 40 years, and had highlighted the issue of sham contracting.

Former UGL employee and Esso worker Troy Carter, who worked offshore as a mechanical fitter for six years in Bass Strait, said the UGL contracts violated workers’ right to  collectively bargain for their own wages and conditions.

The AMWU delegate, who was a guest speaker and panellist at the recent Global Union Corporate Tax Campaigning Seminar in Geneva, said the Longford dispute had become an international issue.

After the seminar, Mr Carter met with unions in Switzerland, London and Aberdeen, where he was buoyed by the solidarity shown by workers.

“It was pointed out to me in both London and Aberdeen that our campaign is seen as a very important step in fighting back against an inevitable wave of action that surely would have hit other workers in the oil and gas industry worldwide had we not taken a stand,” he said.

“This stand has led to many other unions and workers worldwide to join in the fight to keep our members on the picket line by committing to help us and our families.

“We have been offered numerous amounts of solidarity, including many offers and actions that are yet to bear fruit.

“I was asked by the Morning Star newspaper in the UK, ‘Do you think you can win this dispute’?

“I was proud to be able to answer, ‘We started this campaign over 500 days ago and have not gone backwards since; of course we can win this fight’.”

Mr Carter said the Longford industrial dispute was also “a very important fight for all Australians”.

“Every Australian is at risk of having their wages cut by 40 per cent overnight if we walk away from this dispute,” he said.

“It would open the floodgates to many other companies just waiting to deploy the same tactics on their workforce should ExxonMobil/Esso get away with it.”

Mr Carter said ExxonMobil was an American company “stripping Australia of it’s resources”, yet providing little back in the way of tax contribution for those resources.

ExxonMobil told a senate inquiry in Melbourne earlier this year it had not paid any corporate income tax since 2013 because of legitimate write-offs from invested capital, debt costs and a lower income.

And it was revealed that the company paid no corporate income tax on its $6.7 billion income in 2015-16, including on its Esso Gippsland basin operations.

ExxonMobil tax manager Stuart Brown told the inquiry the company was not likely to pay any corporate income tax until 2021.

“It took us, our unions and the great work of the Tax Justice Network (an independent advocacy group) to expose their … actions,” he said.

“The picket line will continue to remain in place for as long as it takes “This is a bigger fight than just getting jobs back.”

Opposition leader Bill Shorten told the Gippsland Times in September that if elected, his government would change the workplace legislation that allowed subcontractors to change workers’ existing wages and conditions.

An Esso spokesman said the specific rates of pay and conditions of employment were a matter between UGL and its employees.

However, he added that as a long-time major employer in Gippsland, it was pleased that it could continue to provide jobs in the region through direct and indirect employment.

ExxonMobil Australia had a long history of paying its fair share  f taxes in Australia, having paid more than $2 billion in corporate income tax alone since 2000, as well as more than $12 billion in Petroleum Rent Resource tax since 1990, he said.

It has invested nearly $40 billion in the country.