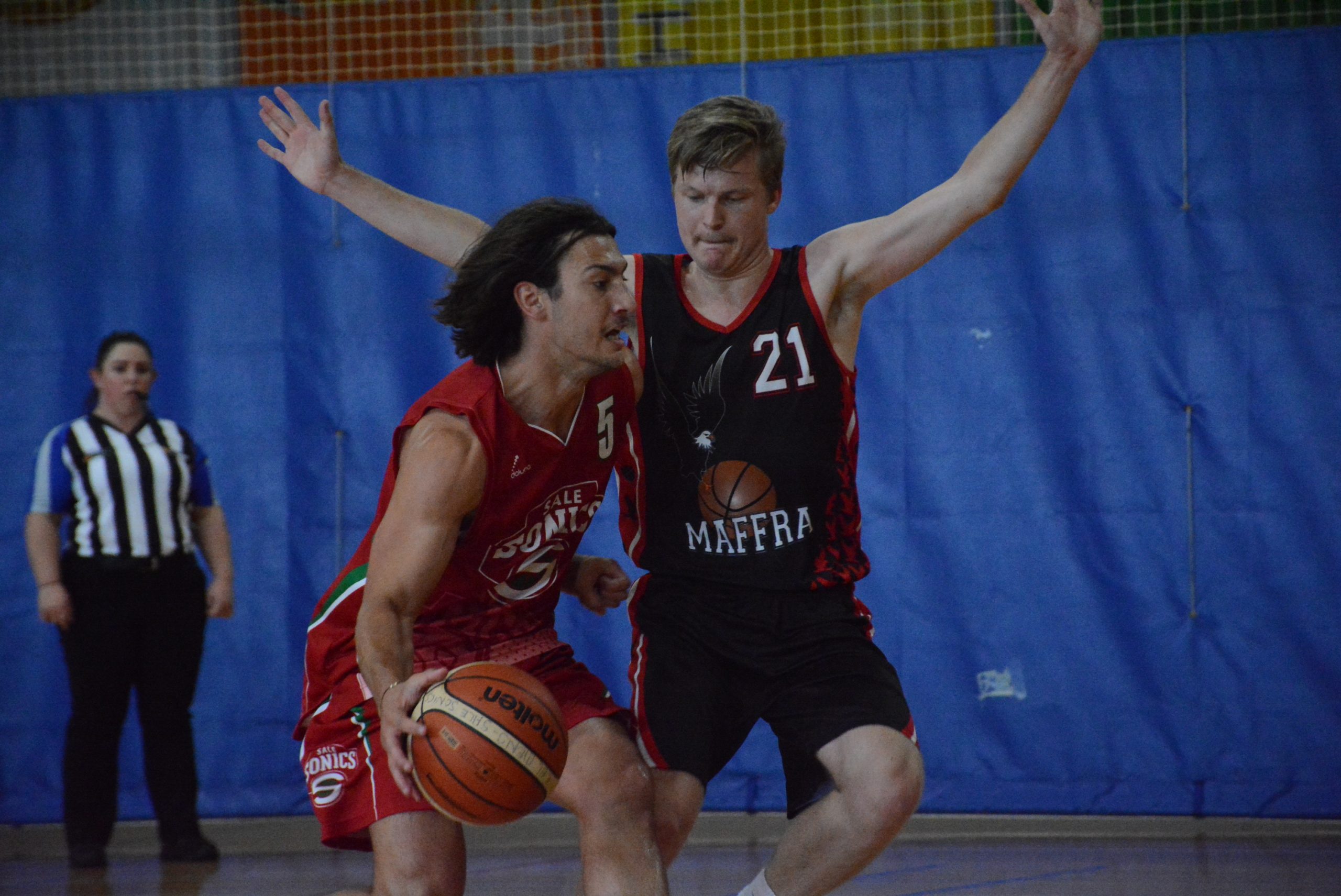 Maffra set-up its victory in the women’s match by establishing a nine-point lead at quarter-time.

The Eagles led by eight points at half-time, 10 at three-quarter-time and by as much as 15 in the final term, before the Sonics came back to reduce the margin to six by full-time.

Emerson Connolly scored 13 points for the Eagles, and Coco Henry 12, with both hitting three three-pointers. Kristy Glover and Breanna Kerton scored 12 each for the Sonics.

Maffra also began the men’s match strongly to led by 11 points after the first quarter. The margin was stretched to 13 by three-quarter-time, before the Eagles ran out the match in the final term to win by 23.

The Eagles’ strength was their spread of scorers, led by Sam Whelan with 26 points (including four three-pointers), Bill Pleming 20 and Brent Walker 16. Sale’s Billy Hughes led all scorers with 34, while teammate Marcus Cope recorded 12.

The victory gave Maffra a share of the ladder lead with Moe.

ON Saturday night, the Sale men lost to Traralgon in overtime, 98-95, after scores were level 85-85 at the end of regulation time.

The visiting Sonics came from 13 points down at three-quarter-time to force the extra period.

Hughes scored 34 points for the Soincs and Brad Dessent 31, while Christian D’Angelo scored 29 for the T-Birds and Jordan King-Church 21, .

The Eagles led by 10 points at half-time, before lifting to lead by 24 at three-quarter-time following a 30-14 term to put themselves out of the Wildcats’ reach.

Sam Whelan top-scored for the Eagles with 23, while Andrew Quirk scored 19. For the Wildcats, Lachlan Thomas and Brodie Mabilia both scored 18.

In the women’s, Maffra lost to the undefeated Wildcats 61-48.

Maffra led by one point at quarter-time before Korumburra drew level at half-time. The Eagles led by four at three-quarter-time, but were overpowered by the Wildcats, who scored 21 points to eight in the final term.

Coco Henry scored 18 points for the Eagles, and Jamie Lee Jeffs 20 for the Wildcats.

Sale got to within four points of Traralgon at three-quarter-time, but lost 58-49.

The T-Birds were led by Emirson Devenie, who scored 22 points, while Glover recorded 12 and Kerton 11 for the Sonics.

THIS weekend, the Maffra and Sale men’s teams will play Bairnsdale.

The Eagles will host the Bullets on Saturday night from 7pm, before Sale heads to Bairnsdale on Sunday to play from noon.

The Maffra women’s and men’s teams will travel to Moe on Sunday for matches beginning at noon and 2pm respectively. The men’s match will be between the top two teams on the ladder.