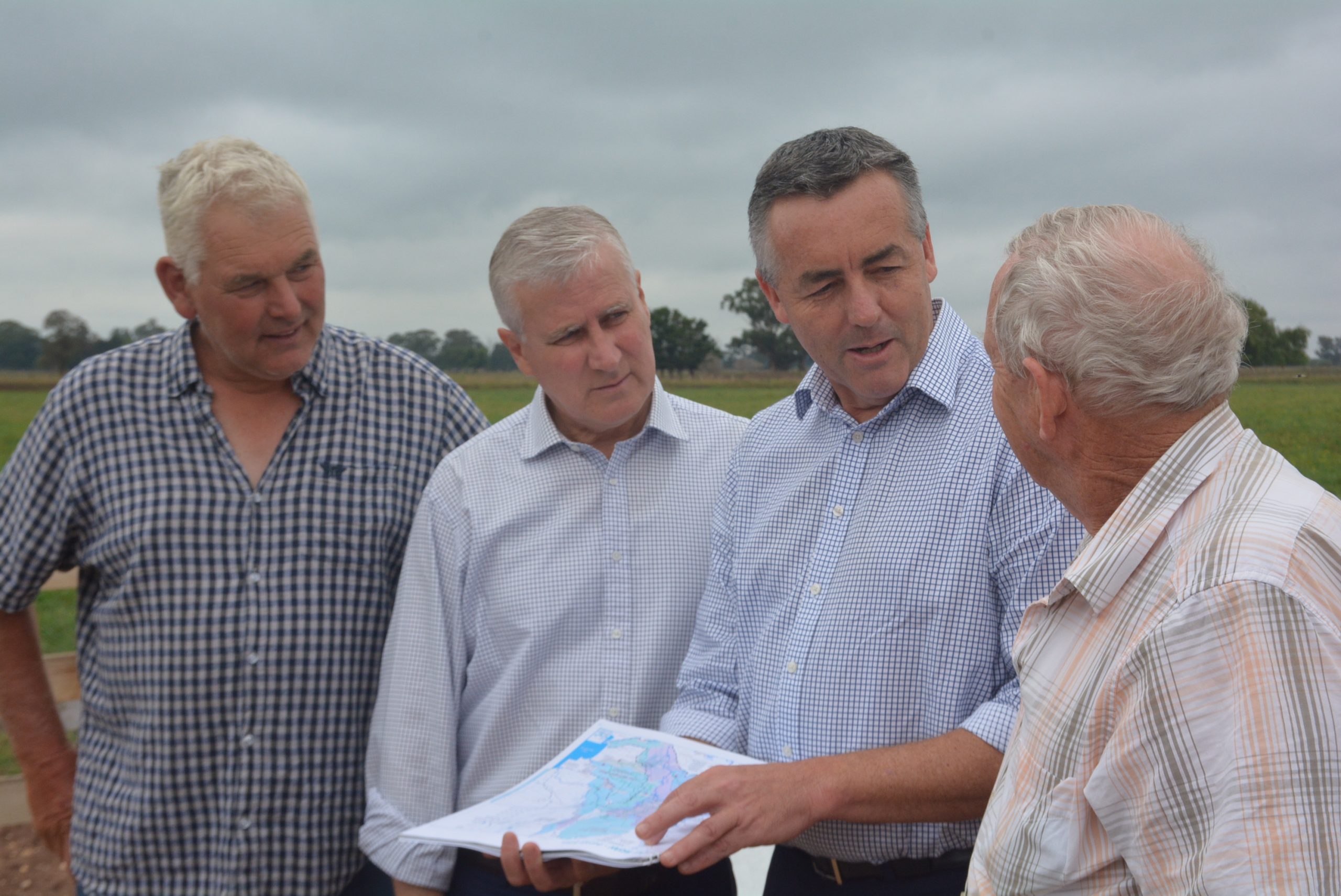 Touring properties between Traralgon and Sale, and around Giffard, Mr McCormack also visited Tinamba to inspect upgrades in the Macalister Irrigation District.

The Deputy Prime Minister encouraged Victoria to sign up to the on farm drought infrastructure grants scheme, as well as the national Farm Debt Mediation scheme, while endorsing the findings of the recent historical banking royal commission.

“It’s really important that banks will now no longer charge default interest on distressed agricultural loans, the fact is now there is going to be a requirement to have somebody experienced in agriculture when agriculture loans become distressed,” he said.

“Mediation begins and the fact is receivers aren’t going to be called in as a last resort. The national farm debt mediation scheme is overdue, it’s a good thing, and with this royal commission there has been some good outcomes for rural and regional districts particularly farmers,” Mr McCormack said.

Mr McCormack was invited to the area by Gippsland MHR Darren Chester, who used the visit to push the case for further funding for the MID.

The federal government provided $20 million toward the initial stages of a major modernisation project, which will deliver more efficient irrigation practices and secure a strong future for the local agricultural sector.

Mr Chester is now lobbying for funding to phase two, which will focus on the Newry area.

“Phase one works have achieved bi-partisan support funded by the federal government, state government and irrigators themselves,” Mr Chester said.

“Phase two will save and reinvest up to 10 gigalitres of water back into the Gippsland rural economy, secure the Newry supply network and boost Gippsland’s output of milk and food, and improve environmental outcomes by reducing nutrient discharges to local waterways and the Gippsland Lakes.

“Importantly, phase two works would boost jobs during construction and create ongoing jobs for the region as rural businesses expand.”

Produces dairy and other high-value produce, the MID contributes an estimated $500 million to the Victorian economy.

Local farmers Alan Clyne and Hans Van Wees were on hand to demonstrate newly-installed flood irrigation units, which have the capacity to cover close to 100 acres.

The units can be operated via a mobile phone or tablet device, making irrigation more convenient for farmers and doing away with the need to have Southern Rural Water venture out to property’s to turn on irrigators.

Mr Van Wees said he was saving 20 per cent on water volume, allowing him to irrigate more on farm during the respective season.

“There is a good incentive to save water by rationalising,” he said.

“Much of the national media attention has been on New South Wales and Queensland,” he said.

“While the area affected by drought is smaller here than in other states, the impact on individual farmers, families and communities here in Gippsland is no less severe.

“We need to keep listening to our farming communities and ensure the relief measures are providing the help farmers need.”

Mr McCormack, who is the federal Infrastructure, Transport and Regional Development Minister, is supporting the campaign to secure $33 million from the state government to complete the duplication of the Princes Highway between Sale and Traralgon.

Mr McCormack said the federal government wanted to partner with the Victorian government to make the highway safer.

“This project has enjoyed bipartisan support since it began in 2010. Safer roads — especially in rural and regional Australia — is something the Liberals and Nationals are making a reality and we want to partner with the Victorian government to finish the Princes Highway project here,” Mr McCormack said.

As well as tours of the MID, Prices Highway, and drought affected areas, Mr McCormack also visited RAAF Base East Sale to meet newly-posted Defence Force members and their families.