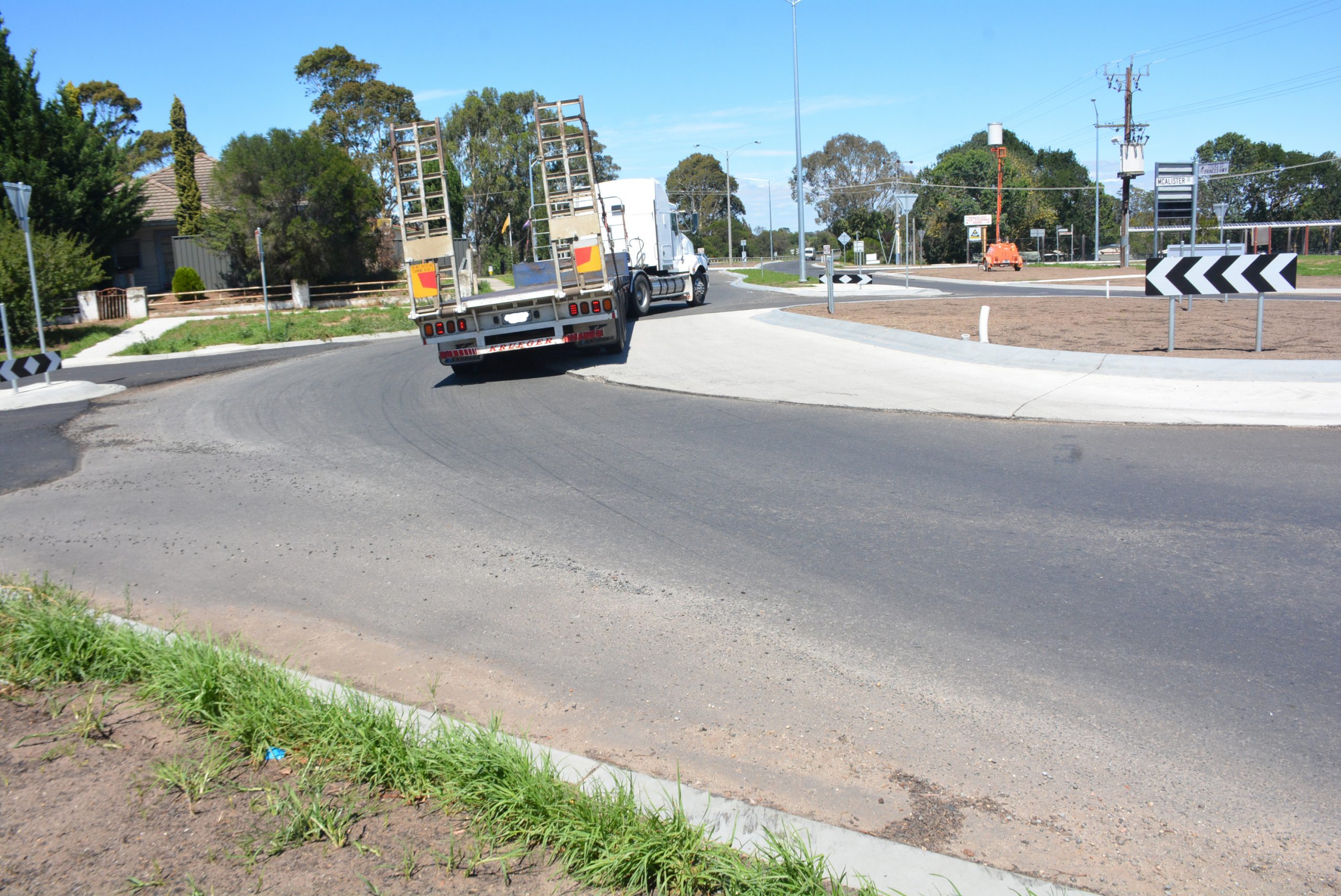 VICROADS has defended its unpopular Stratford roundabout, despite overwhelming criticism by motorists perplexed by its uneven surface and tight configuration.

The roundabout is creating traffic flow issues for vehicles travelling through Stratford, with drivers describing it as “stupid”, “dangerous” and “an accident waiting for happen”.

More than 500 people over four days responded to a Gippsland Times Facebook post on the roundabout, criticising its placement at the intersection of McMillian and Tyers St, its tight configuration, and the uneven road level on the east side which was caused when a water pipe identified during construction works resulted in remediation works and the placement of a cover plate.

In addition, long vehicles such as trucks, caravans and buses are being forced to drive over the centre concrete mound, which was damaged within weeks of the roundabout opening late last year.

Many drivers have been strongly critical of the roundabout’s design, and do not believe it has improved traffic flow.

One frustrated commuter asked, “How long until a B-double of livestock is tipped over there?”, and another described the uneven surface as a “a giant launch pad”, and “very, very dangerous”.

One local motorist said it was “only a matter of time” before someone was “cleaned up”, because of confusion surrounding which vehicle had right of way.

A driver of a heavy vehicle commented he feared the day a truck driver attempted the roundabout with an oversized or uneven load.

Another noted the roundabout was creating massive queues over the summer holidays, with Melbourne-bound returning traffic queued back to between Swallow Lagoon and Reeves Rds last Easter, even before the roundabout was installed.

“I wonder will all of this ease or compound the traffic,” he asked.

But VicRoads director of safe systems road infrastructure, Scott Lawrence, said there was more work to complete on the roundabout.

Mr Lawrence said a final asphalt layer was still to be installed, and would be completed at night to minimise the affect on traffic.

He also said the roundabout was designed to allow larger vehicles to drive over the centre mound, with the raised skirting forming part of the road.

However, Mr Lawrence did not respond to concerns the mound was raised skirting was already showing significant signs of wear and tear.

“Due to space restrictions, the roundabout has a concrete skirting on the Sale-bound side that large vehicles can drive over. This skirting forms part of the road,” he said.

“Roundabouts improve safety by reducing vehicle speeds and making it easier to choose a safe gap in traffic.”

Mr Lawrence said research showed roundabouts could drastically improve safety, and reduce fatal and serious injury crashes by up to 85 per cent.

“We met with Stratford residents in 2017 and 2018 to understand what road safety improvements they wanted in their town and we’re pleased to have now delivered on that, with this new roundabout and safer speed limits through the town,” he said.

The speed limit through Stratford, from the Avon River Bridge to McFarlane Street, is now set at 50 kilometres per hour, while the current 60kph zones on approach to the town is slightly extended to provide a longer buffer.

A VicRoads spokesperson said the changed speed limits were introduced to improve safety through the town.