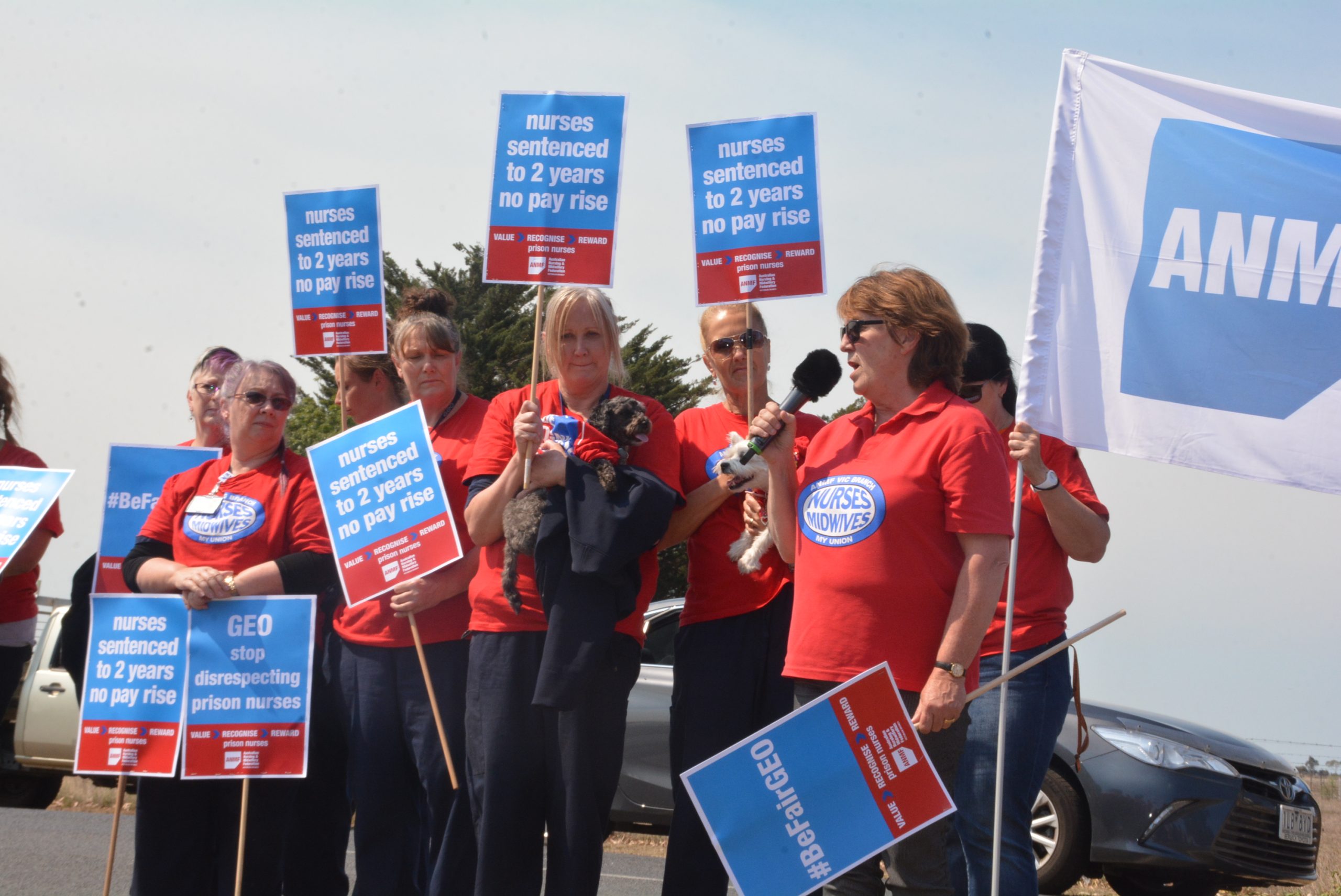 NURSES walked off the job on Thursday at Fulham Correctional Centre, as they continued their campaign for more pay and improved leave entitlements.

As a sizable contingent gathered outside the prison, songs such as Elvis Presley’s Jailhouse Rock and Twisted Sisters’ We’re Not Gonna Take It were played over a public address system, with local nurses joined by fellow members of the Australian Nursing and Midwifery Federation.

Wearing red campaign T-shirts, ANMF members were instantly recognisable, and found support when union members from the Longford Esso UGLY dispute arrived to stand together, bringing their inflatable mascot ‘Greedy the Fat Cat’ along for the ride.

Private prison operator GEO Group Australia and the ANMF have been in enterprise bargaining negotiations since December 2017.

GEO has offered to increase pay by 9.9 per cent over four years, but this has been rejected by the nurses.

“We need more than that for these nurses so that they actually maintain their parity with other prison nurses across the state,” she said.

“We’re seeking a wage increase that’s comparative with the percentage increases that other nurses in prisons have got, which is three per cent per annum.

“Its disappointing that they [the nurses] have to go to these lengths.

“We know that GEO have finally agreed to come back to the negotiating table, but we do need them to come back with a revised position, not the position that they’ve been putting up since late October, early November last year.”

Fulham nurse Jessica Loprese, who works in a team of seven caring for more than 900 prisoners, said GEO’s position was that it didn’t think the work they did was equal to what other nurses did in other workplaces.

“We would obviously like to argue that point,” she said.

Ms Fitzpatrick dismissed claims that industrial action would put the safety at the Fulham prison at risk, adding GEO has had ample time to respond.

“They had an opportunity to challenge that industrial action that the nurses were proposing,so we have given them over two months of notice.

“They’ve had a long opportunity to put in place alternative measures if they were concerned.”

As well as increased pay and leave allowances, the ANMF is also seeking a classification structure at the prison, as many of the classifications that exist currently have no position description attached to them.

“We’re asking Fulham to get off their butts and actually do some serious work in relation to the classifications of the staff that they have at their prison, that reflects the expertise and experience of different roles that they have,” Ms Fitzpatrick said.

Nurses taking industrial action will be compensated by the ANMF hardship fund, as formal discussions between GEO and the ANMF draw closer.

GEO had advised the union it is not prepared to enter into further talks until Tuesday.

“We’ve written to GEO a number of times, we’ve got evidence of those letters, we don’t believe we’re at an impasse because we have been contacted by them to say that they will come back to the negotiating table,” Ms Fitzpatrick said.

“We don’t want a token return to the table — we want serious negotiations.

“We want a serious outcome, and we want an improved offer to the things that we need.”

GEO Group Australia reiterated comments issued to the Gippsland Times last week, where it said it had been in negotiation since October 2017, striving to reach agreement on a Nurses Enterprise Agreement for nurses at Fulham Correctional Centre.

“Unfortunately, negotiations are at an impasse, with union members passing a ballot for protected action.

“GEO is committed to actively seeking a mutually agreed outcome for its nursing staff and finalising an agreement as soon as possible.

“It is inappropriate for GEO to comment on this matter while negotiations are ongoing.

“GEO has put in place a number of strategies during this time to minimise disruption to prisoner health services.”