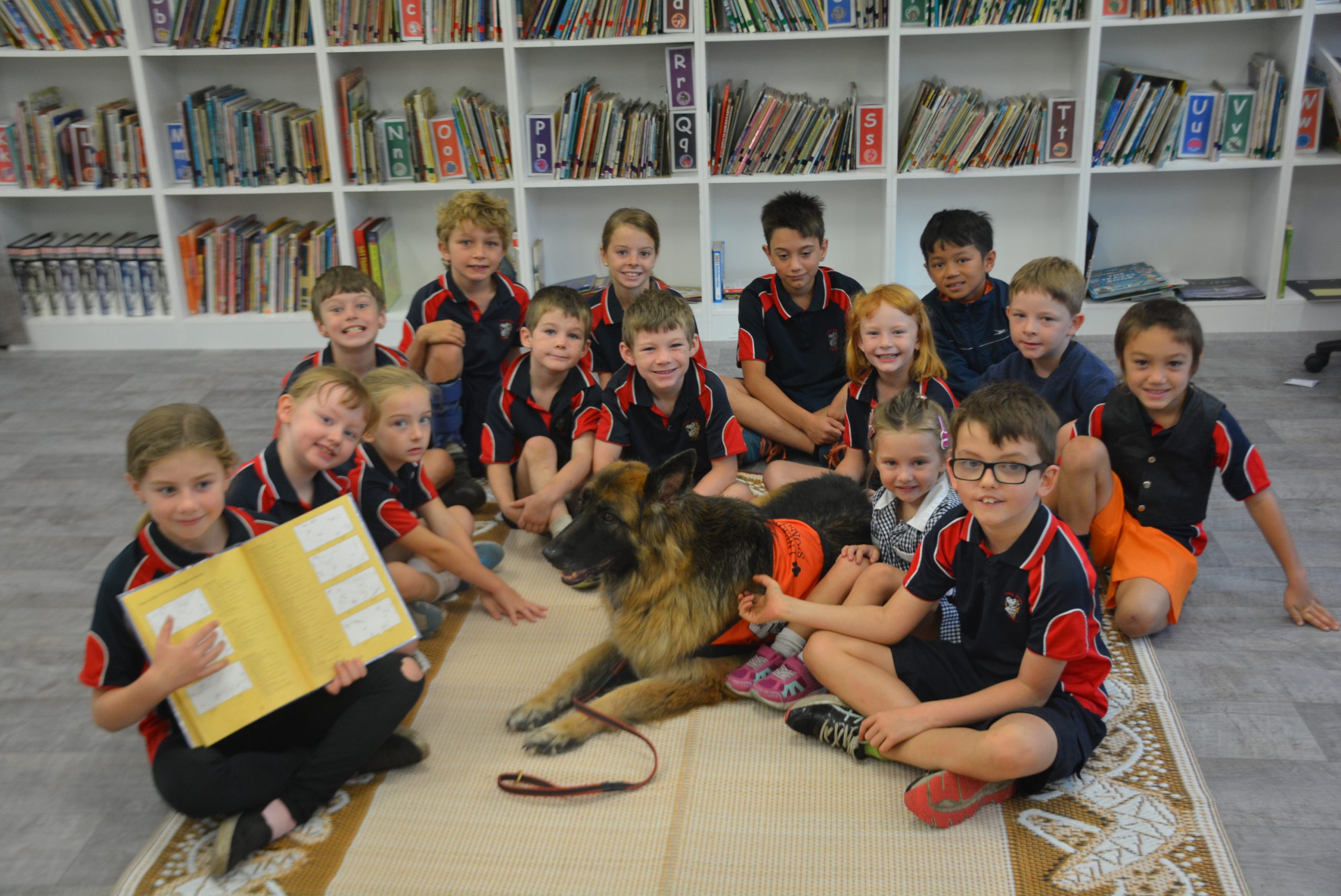 THEY say you can’t teach an old dog new tricks, but Kali’s not your average dog.

But most of all, Kali loves people.

For the past six years, she has worked with people with complex disabilities, attending a specialised pilates class once a week, and has previously worked with children to overcome their dog phobias.

During this past year, Kali has learnt a new trick, taking up a new occupation – Loch Sport Primary School’s resident story dog.

She won’t eat their homework, but she is helping the students immeasurably.

Every Monday morning, Kali and Sharyn visit the school, joining the children on their morning walk, before the students have the opportunity to read with Kali.

“It’s just really rewarding … I get so much out of it,” Sharyn said.

“I think Kali loves it too – she comes in, her tail’s wagging, she’s happy to see all the kids.”

Recently, Kali even celebrated her seventh birthday at Loch Sport Primary School, standing out the front of assembly like any other child on their birthday while everyone sang happy birthday, before opening her present with her paws – her very own water bowl – and tucking into some cake.

Grade four student Tahlia Sheldon, aged nine said her favourite thing about Kali was how she “makes people laugh all of the time”.

“She listens, she looks at the books … she even puts her ears up when you say ‘bone’,” she said.

Kaden Morris, aged eight, said he felt calm around her.

“She makes me feel happy – when you scratch her on the belly, her leg moves.”

Normally, four children are chosen by teachers to attend the Story Dogs Program, and read with the story dog each week of the school term for a year.

“As Loch Sport is a small school, each of the children get a chance to read to Kali,” she said.

“We do focus very much on the kids that need a little bit of extra help with their reading, or sometimes the kids who just need a cuddle for the morning and a chat, and they can tell Kali all their stories and what they’ve been doing.

“It’s not like being in a school where you’ve got difficulty with reading so you go off with Miss Smith to practice your reading – it’s a highlight to go and read to Kali.

Sharyn said as dogs are non-judgemental, she didn’t care when students got the words wrong.

“Sometimes if the kids are struggling with a word, I don’t help them with the word, but I just say to them, ‘Can I tell Kali what that word is because that’s a really difficult word, and she’s not sure what it is’,” she said.

“It’s more her doing it, rather than me correcting it or just telling them what the word is.”

Sharyn said she had noticed a difference in a number of children who, initially when reading were hesitant or quiet, but after a few weeks of reading to Kali, they were more confident and enjoyed their reading.

“Sometimes if they are feeling tired or over-excited, they just sit and stroke her. Then they feel calm enough to read,” she said.

“There’s no pressure and children work at their own pace.”

Sharyn said her calm and gentle nature made Kali an obvious choice as a story dog.

“Children can be unpredictable and excited and the story dog team need to be able to manage that,” she said.

“It actually costs them about $500 a year to have a story dog in the school, because they provide the teams with a number of books at the start of the year, you get a bag, you get a big mat for the dogs to lie on, they have to train the handlers in the beginning.

Since she was a puppy, Kali has trained with the German Shepherd Dog Club in Sale.

“When she was about 12 months old, they kept saying to me, she would make a fabulous therapy dog – she’s just got that lovely temperament,” she said.

“There were a couple of people at the shepherd club at that stage who had therapy dogs, so they helped me.

“They set up situations so she could walk through crowds, people making lots of noises, lots of other dogs … all sorts of situations that she might encounter.”

Last year, she was awarded the Techno Belle Award, in recognition of dedication to the positive promotion and education of German Shepherds in the community.

“Kali has such a soft and gentle nature – she just seems to know what people need at that time and sometimes the things she does bring tears to my eyes,” Sharyn said.

“I’m always amazed at what dogs can do.”

Story dogs will be completing assessments to accredit story dog teams for Gippsland in early April in Sale.