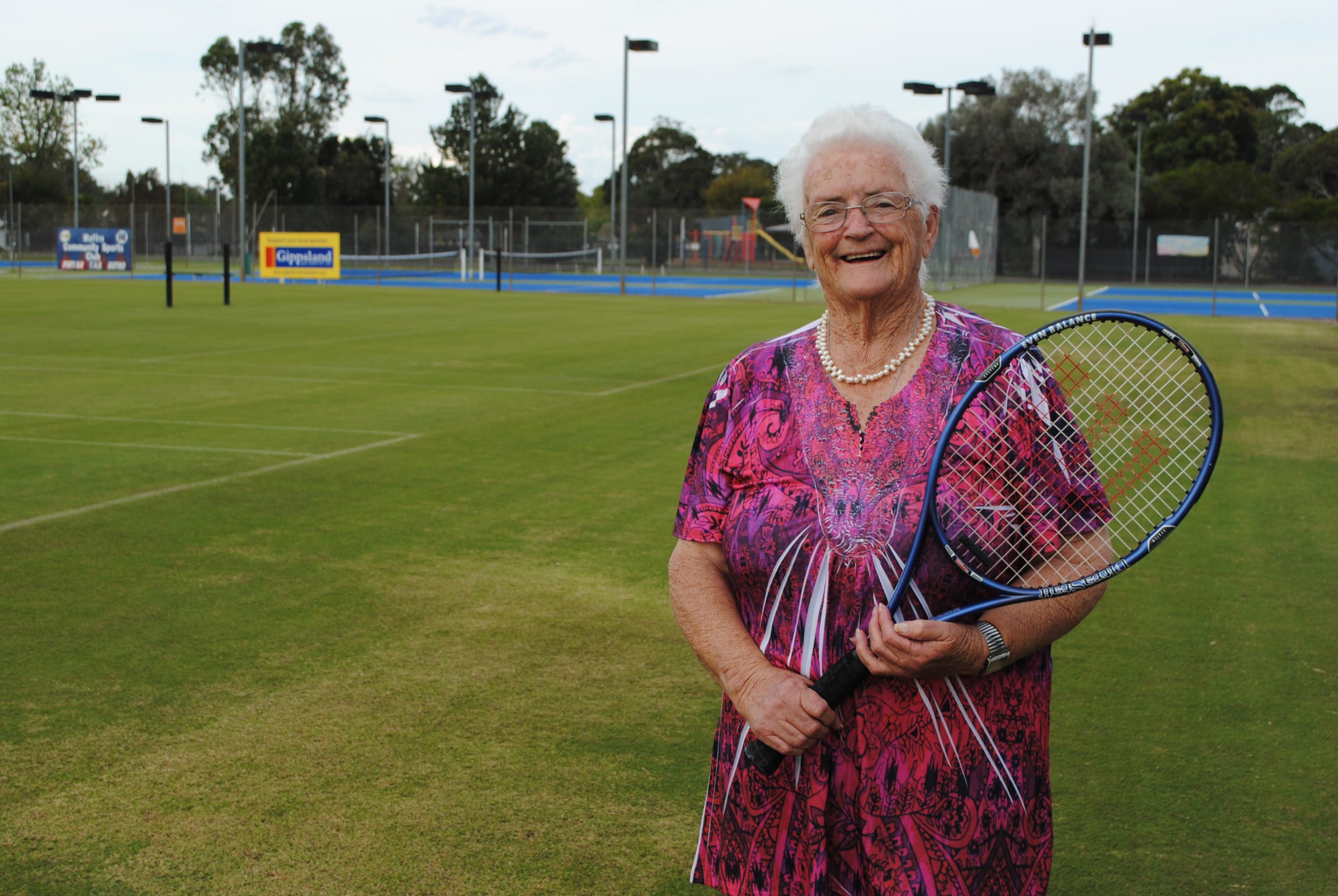 “WHERE are the scones?”

That is the catch cry that seems to greet Lorna Bailey whenever she arrives at Maffra Lawn Tennis Club.

While the sprightly 81-year-old has a fearsome reputation around the club for maintaining order, she manages to draw everyone in with her unrivalled talent for cooking up the most delectable of baked goods – the simple plain scone, or, perhaps, a date variety for those feeling adventurous, and of course, topped with strawberry jam and cream.

“They’re so damned easy to make,” she grinned.

Lorna grew up at the Bundalaguah post office and the telephone exchange, one of 10 children to Clive and Ollie Grant.

After year 10, Lorna left school to help her mother with the rest of the young family, milking cows, and separating the milk from cream to be sent to the butter factory in Sale.

While she played a spot of tennis here and there in Bundy, she became a regular player some 40 years ago, as something to do when her youngest of seven, Tracey, went to primary school.

“Tracey used to play, when she was little – I used to put her on the back of the bike, and we’d go to tennis.

“Rebecca played tennis for a little while, and Greg did too, but he was so bad tempered,” she grinned.

Now, she is Nana Bailey to 18 grandchildren and 23 great-grandchildren (with another on the way), and has managed to play seniors pennant with her adult daughters – even sneaking a few premierships here and there.

She was a regular Monday ladies, Tuesday night, Wednesday, Friday and Saturday pennant player at the club, so when she underwent a knee replacement in 2000, friends and family were devastated, convinced she would have to hang up the racquet.

Within months, Lorna had made a miraculous comeback to the sport, aged 68.

Lorna has since celebrated her 70th and 80th birthdays at the Maffra Lawn Tennis Club, and was awarded life membership in 1999.

She was also one of the first women to be given life membership to the Sale-Heyfield Tennis Association in 2002.

Of course, Lorna is no stranger to community life outside the tennis club, having been the former president of the Maffra Mardi Gras for 10 years, honoured for 35 years of service to Maffra Basketball Association, is a Rotary Club of Maffra Quiet Achiever Award recipient and the only Maffra Rotary Club Paul Harris Fellow to not be a Rotarian.

She was a frequent Meals on Wheels deliverer, Maffra Red Cross committee member for 10 years, and secretary of Maffra Senior Citizen Club for 15 years.

Lorna and her sisters – Joyce, Pat, Val and Jenny – travel by bus to Merimbula every year, raising money for the Royal Children’s Hospital.

Lorna was often been spotted selling raffle tickets for various organisations on Johnson St, and is particularly skilled at not letting many walk past without buying a ticket.

Her scones feature regularly in the Rotary street stall caravan line-up, and she is always willing to scrape together a fresh batch in the name of fundraising.

Lorna’s record for the most scones baked occurred as a direct result of fundraising for one of her grandchildren, Darcy, helping him in his quest to visit Vietnam with his school.

As her talents are clearly so widely sought-after, Maffra Lawn Tennis Club was quick to book in Lorna’s services for this year’s Easter tournament, and, as always, Lorna is looking forward to it.

Having held the position of secretary at the club from 1990 to 1996, Lorna has been quite involved with organising the tournament itself, and has suffered through her fair share of tournament box banter.

“They’d give me hell, but I’d give it all back,” she laughed.

Her scones boast a reputation so fierce they made the tournament’s entry flyer this year, along with friend Kath Pleydell’s jelly slice – the first two delicacies to completely sell out of the tournament canteen every year.

Lorna recalled one year, a volunteer put in an order for a specific number of batches, thinking it would be enough to last the entire four days.

“As I was walking into the tennis club, she was on the phone trying to ring me up to make more scones,” she chuckled.

While she no longer works on the committee or swings a racquet, Lorna said she still felt like she belonged at the club, and has plenty of life-long friends there to verify that claim.

“I walked out of the tennis club one day, and there were two little boys going to the swimming pool, and one of them says, ‘oh, hello Lorna, how are you?’ and the next one says, ‘hello Mrs Bailey,’ and the first one says, ‘who’s Mrs Bailey?’,” she laughed.

“I love to go down there … I go as often as I can get there, and everybody welcomes me.

“When I went down on semi-final day, people were like, ‘oh, here’s Lorna!’ … it feels good.

“What I do, I do because I want to do it, not because I’m forced to do it, and they must think I do a good job.”