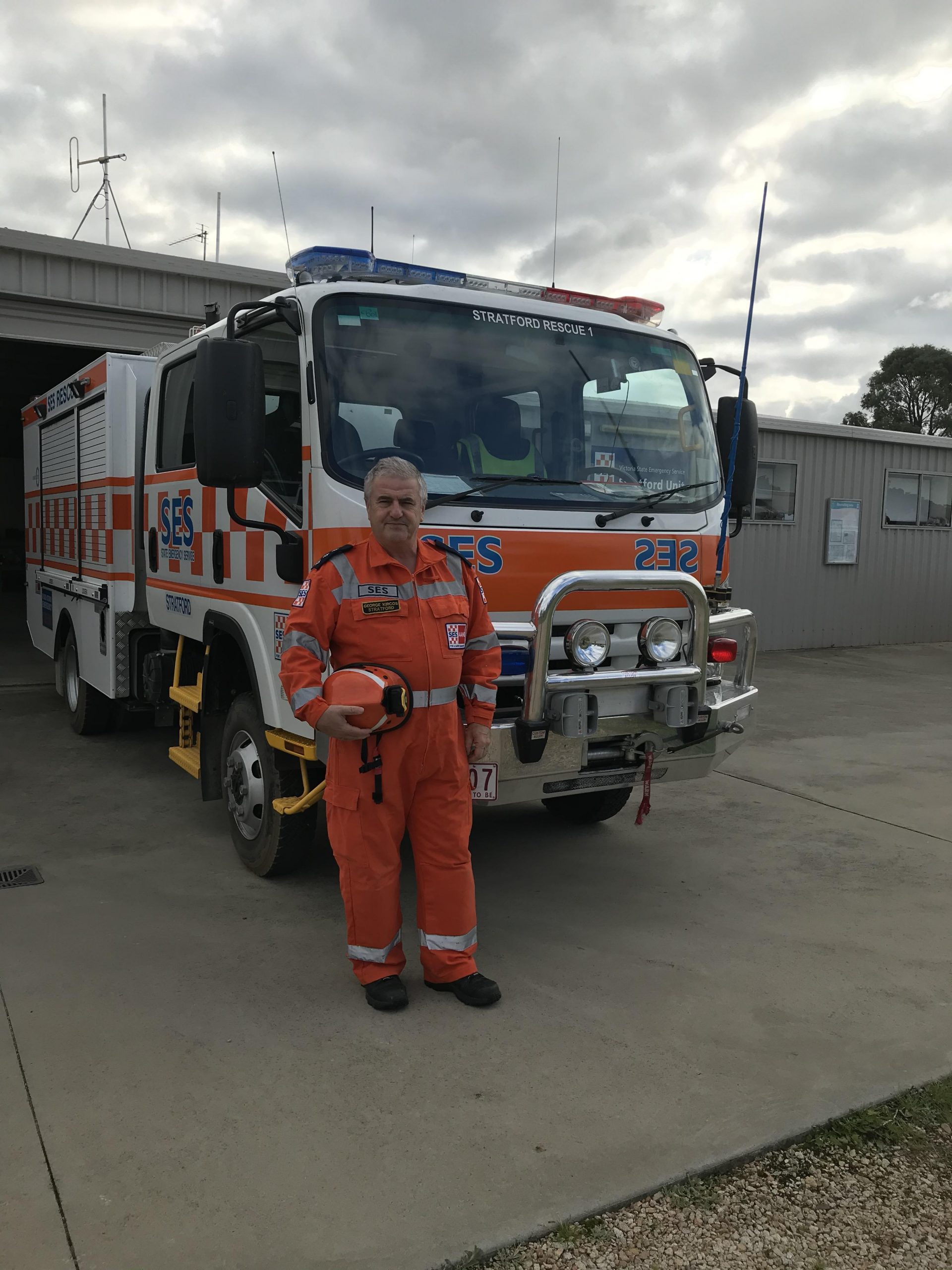 MOST people will be familiar with the State Emergency Service’s Driver Reviver sites – smiling men and women in orange overalls, giving up their long weekends to offer hot beverages and chats to tired motorists taking breaks.

But there is a side of SES that the public doesn’t usually see – an invaluable contribution to community, performed selflessly and usually in times of crisis.

Stratford SES unit controller George Kircos joined Stratford SES in 1993, after feeling he needed to contribute to his community somehow.

He felt with the skills he had, he would be best suited to the local SES branch.

“I thought that with the skills that I had, I felt that I could contribute to my community and also learn new skills, which would benefit not just myself but also my employer,” he said.

Some of the more frequent incidents Mr Kircos now attends with his unit are storm-related, such as trees that have fallen on houses and fences, or have become traffic hazards after falling on roads.

Country Fire Authority or the Department of Environment, Land, Water and Planning also request the SES’s help, in fire support tasking and, more recently, deployment to staging areas for bushfires.

SES was involved from the first day of the east Gippsland bushfires until the last.

Mr Kircos stuck his hand up to join a taskforce to fly into Mallacoota, since the only road into town was closed.

Heavy smoke and poor visibility hampered aircraft access, and all the while the town was under fire threat from all fronts for several days.

“Naval ships, military and private aircraft were used to fly in rescue teams and fly out stranded members of the public to safety,” Mr Kircos said.

“I was part of a SES team of three flown in to relieve the local Mallacoota SES unit, so its members could take a well-earned break.

“Our task was to provide a primary rescue response, as well as assist with the clearing of trees on roads and property and any other tasks that we could help with.

“We familiarised ourselves with the township and surrounding areas, saw firsthand the devastation the fires caused, and ensured that we continued to provide a visual presence to this community to say to the people that they were not alone.”

Traumatic experiences can be part and parcel of an SES volunteer’s role, but the organisation provides peer support training – refreshed regularly – to all members. After each call-out, a debrief discusses and addresses issues or concerns related to the circumstance.

Peer support is always requested if the job is identified as being of a critical or traumatic nature.

Mr Kircos is passionate about taking care of mental health and wellbeing, and was part of the RU Triple OK campaign last year, which facilitates peer and social support for emergency service workers.

“Some of the jobs we get can be quite difficult and stressful on all emergency personal attending and affects every one of us differently,” Mr Kircos said.

“The welfare of my team is the most important task that I have as a unit controller.

“I need to make sure that the team is ready, fit for task, and appropriately trained to respond to any job 24/7 every day of the year – and the way we do that to support and be there for each other.

“So, I guess what keeps me going well.

“It goes back to why I joined it the first place, to help people in need.

“I love what SES is all about, volunteers all willing and striving towards one thing, helping your neighbour in times of need, day or night, 365 days a year.”

Mr Kircos said the job’s rewards came in many ways, including meeting new people, training with friends and using skills learnt from SES in everyday life.

“The skills, knowledge and training that I have learnt over time, gives me the ability to face any situation, to think it through calmly and to resolve it, which is a powerful thing,” he said.

“People really do appreciate what we do and thank us for helping them in their time of need.

“I think that knowing my contribution through SES is helping my community is all the reward you need to keep on going.

“The friendships that I have made along the way and the interaction I have with the other responding agencies has been built over many years on working and training together, which has been demonstrated time and time again, especially with recent events over the past six months or so.”

Mr Kircos encouraged those thinking about volunteering with the SES to simply give it a go.

“Volunteering for the SES begins with training in the fundamentals, which focus on essential safety skills and communication, then moves to the general rescue skills sets,” he said.

“SES has a role for everyone, from operational response to supporting roles in administration, finance, communication, incident management and community support roles.

“You don’t have to be on the tools to have an impact on the outcome.

“Every volunteer, no matter what your role, is a valued team member, plays a part and contributes to a successful outcome every time.

People from the Stratford or surrounding area who want to be part of the SES are invited to attend 53 McFarlane St, Stratford, to meet the team.

The unit trains on the first, third and fourth Wednesdays of each month from 7.30pm, and those interested are welcome to go along and have a look at what the unit does, speak with members and see what roles they play.

People dressed in orange and celebrated the work and commitment of SES volunteers in a national day of recognition last Wednesday.

During the past 12 months, VICSES volunteers have responded to 2628 requests for help in Victoria’s east, from Phillip Island and Mallacoota, to Warragul and Erica.

Hundreds of SES volunteers supported the summer bushfire response, followed by thousands of calls to help with storm damage in recent months.

VICSES is also the largest provider of road rescue in the state.