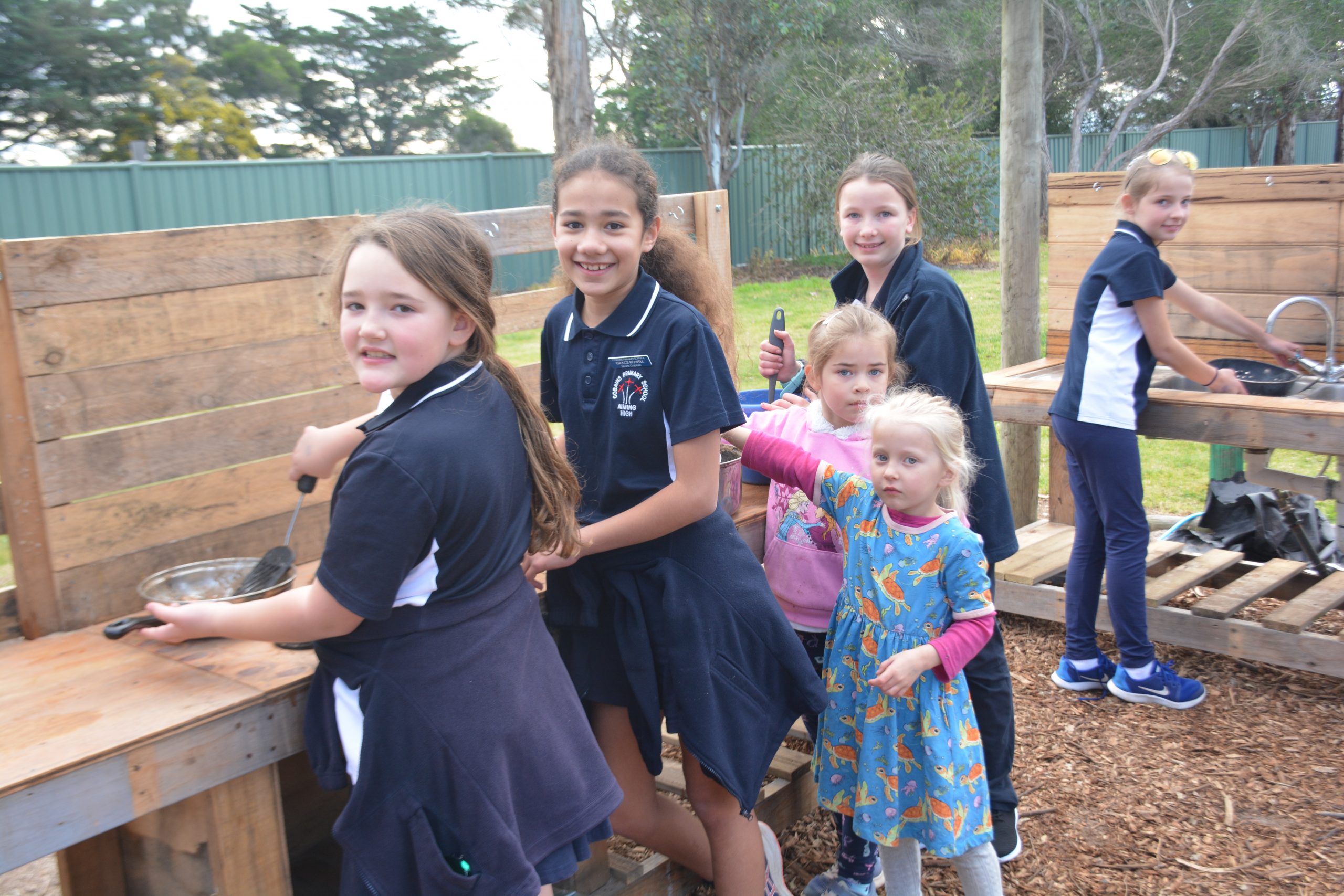 TWO new and innovative playgrounds installed at Cobains Primary School are proving a hit with students.

The modern playgrounds are designed encourage creativity and cooperative play.

School principal Sandra Platt said the playgrounds enabled students to develop a range of skills transferable to the classroom.

“We noticed a lot of our kids needed things to stimulate them to play imaginary, otherwise they’re playing mock-ups of games they’re using on the computer all the time,” she said.

“The idea was just having the different sensory elements like walking on the rocks.

“Core body strength (is important) as well – if you’re not out doing things like running, jumping, and climbing, then you’re not developing your core.

“That affects your handwriting, which then affects your ability to put down what you want on paper in a way that’s effective and efficient.”

The main playground looks similar to a landscape garden, with a dry rock river and old boats sourced from a local farm.

Students can climb on tyres and play with makeshift fishing rods, to pretend they are casting a line out of the boats or from a river bank.

The second playground is a ‘mud kitchen’ – essentially an open air cubby house decked out with tables, chairs and utensils.

“Respect is the main value at our school,” she said.

“It’s about teaching them to use (the equipment) properly and making them something special that they’re using.

“Even with rocks someone said ‘oh you’re having rocks out there, you’ll have broken windows’.

“But they (the students) pick them up and examine them.

“One day they filled the whole boat with rocks and then put them back.

In days gone by, it seemed at least one child every year managed to break an arm on monkey bars, but the playgrounds of yesteryear may be quickly on the way out.

“There was a big push recently to have a lot of playgrounds audited and old ones have noncompliance elements to them now because standards have changed,” Ms Platt said.

Primary schools nowadays are focused on students taking ownership of their learning, Ms Platt added, with the ability for Cobains’ students to exercise freedom in the new playgrounds having a positive effect on their education.

“It’s amazing what attracts their attention,” she said.

“The simpler you make it, the more they can build their games around it, rather than actually giving them too much, and then they’re dictated by what they’re given.

“With today’s kids, everything’s a competition and these types of games take away the competition.

“It’s more about the cooperation and working as a team, so it supports what we’re doing in the classroom.”

The playgrounds have proven popular with students across all the year levels.

Year three student Beau said the best part of the playgrounds was that “you get to use your imagination with play and get to pretend you’re a pirate at the boat”.

Year six student Levi McIvor was glowing in his praise.

“The playgrounds are good because everyone uses them and they don’t go to waste,” he said.

As well as the sensory playgrounds, Cobains Primary School also has other innovations designed to help the learning process, including open learning spaces, wobbly chairs and interactive boards.

Cobains Primary School was one of 11 across Gippsland to share almost $200,000 from the federal government’s Local Schools Community Fund to complete the playground project.

Gippsland MHR Darren Chester said it was great to see local schools benefit from the initiative.

“It is a great pleasure to be able to help some of our local schools to realise projects they would otherwise struggle to complete,” he said.

“Times are tough for communities across Gippsland and fundraising can be difficult.