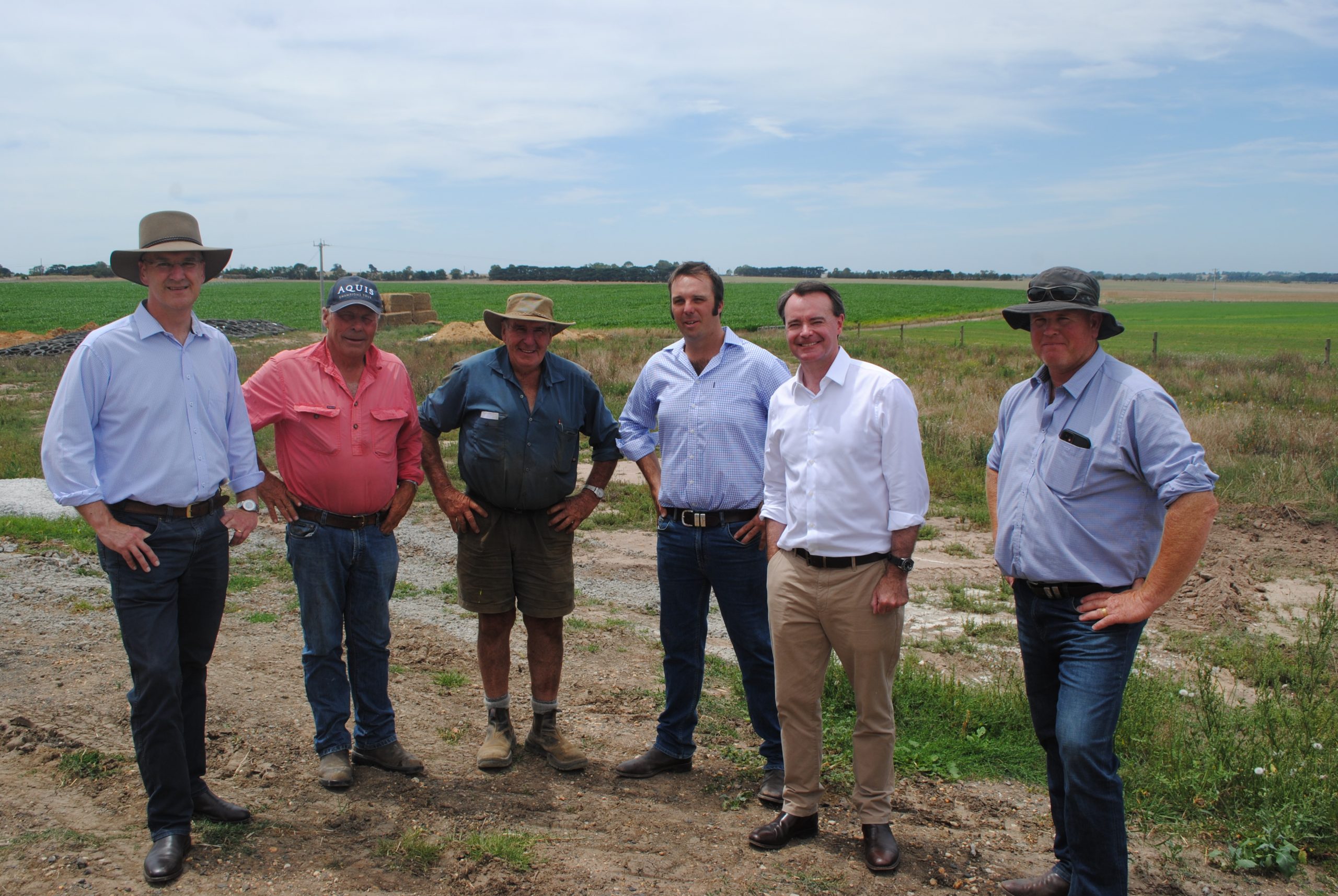 STATE opposition leader Michael O’Brien was in Rosedale this week, meeting with farmers reliant on irrigation water from the Latrobe River.

With uncertainty surrounding exactly where water to fill the Hazelwood mine will come from, talk of using water from the Latrobe River has local irrigators anxious.

Mr O’Brien said it was critical the state government provided reassurance to farmers.

“These farmers are very productive, but you can’t farm without water and they need to be assured that the government won’t be taking water that should be theirs or water that should be for the environment, and putting it into abandoned mines down at Hazelwood,” he said.

Mr O’Brien said it was a “critical issue”.

“We know there is an issue with rehabilitation of the Hazelwood mine sites, but the question is where is that water going to come from?” he asked.

“And we’re certainly here to say it cannot come at the expense of our farmers.

“The government needs to give the community certainty.

“It’s really important for everyone in Gippsland that relies on farming and agricultural activity.

“We need to know how the government is going to resolve this issue with the old Hazelwood mine sites.

“We don’t want to see any subsidence, but you cannot afford to take water away from our farmers or even our environment to put down old mines.”

The Latrobe River Irrigators group, formed last year, believes the best course of action would be to allocate existing water currently held in the Blue Rock system toward farmers.

Latrobe River Irrigators chairman Angus Zilm said this would enable farmers to grow more crops, and grow more food and fibre “which ultimately would be better for the economy in the broader Gippsland area”.

“We’re concerned that water is not being used for productive use,” Mr Zilm said.

“If the mines were to use that water and put it into the pit, then we would not have our reliable water – and that would be detrimental to irrigators along the system.

“It would affect all the crops they grow, it would affect their viability and ultimately their ability to employ staff and the flow-on benefits for the region.

“We are extremely reliant on the river.

“A lot of the farmers use irrigation water to create a season, so we’ll irrigate right through the summer or we’ll start a season off in the autumn or extend a season a bit longer in the spring – we just simply can’t do it without irrigation water.

“It’s vital to make sure we can guarantee yields.”

Gippsland South MLA Danny O’Brien agreed more had to be done to help farmers, adding there was scope to further develop the agricultural sector in the area.

“Certainly one of the great opportunities is the vast amounts of water that is unused in the Latrobe system that could go to expanding irrigated agriculture in the central Gippsland area,” he said.

“It’s a really good opportunity to help us transition as the power stations close – there are good, long-term sustainable jobs and industries in irrigated agriculture and horticulture.

“I’m really pleased that we’ve been able to convince the government there’s merit in that and there is work happening on it now.

“The important thing is that the government mustn’t throw that away by having any of the Latrobe water go into pit lakes in the mines.

“I think we can work through the solutions – and I understand the difficulty and complexity of maintaining stable landforms around the mines – but we certainly don’t want to see any of that unused water going into pit lakes.

“That water should be going into expanding irrigation in the region, creating more jobs for Gippsland.”

Hazelwood operator ENGIE plans to begin filling the mine void this year, which could take decades.

In a statement, an ENGIE spokesperson said ENGIE Hazelwood’s approach to filling the mine void had been “designed to manage environmental concerns, and will not affect the access or entitlements of any other water user in the short or long term”.

“We continue to discuss future water source options like recycled and desalinated water with government and relevant regulators,” the statement read.

In December, government documents revealed there would not be enough water in the Latrobe River system to create pit lakes out of the Latrobe Valley’s mine voids under forecast climate scenarios.