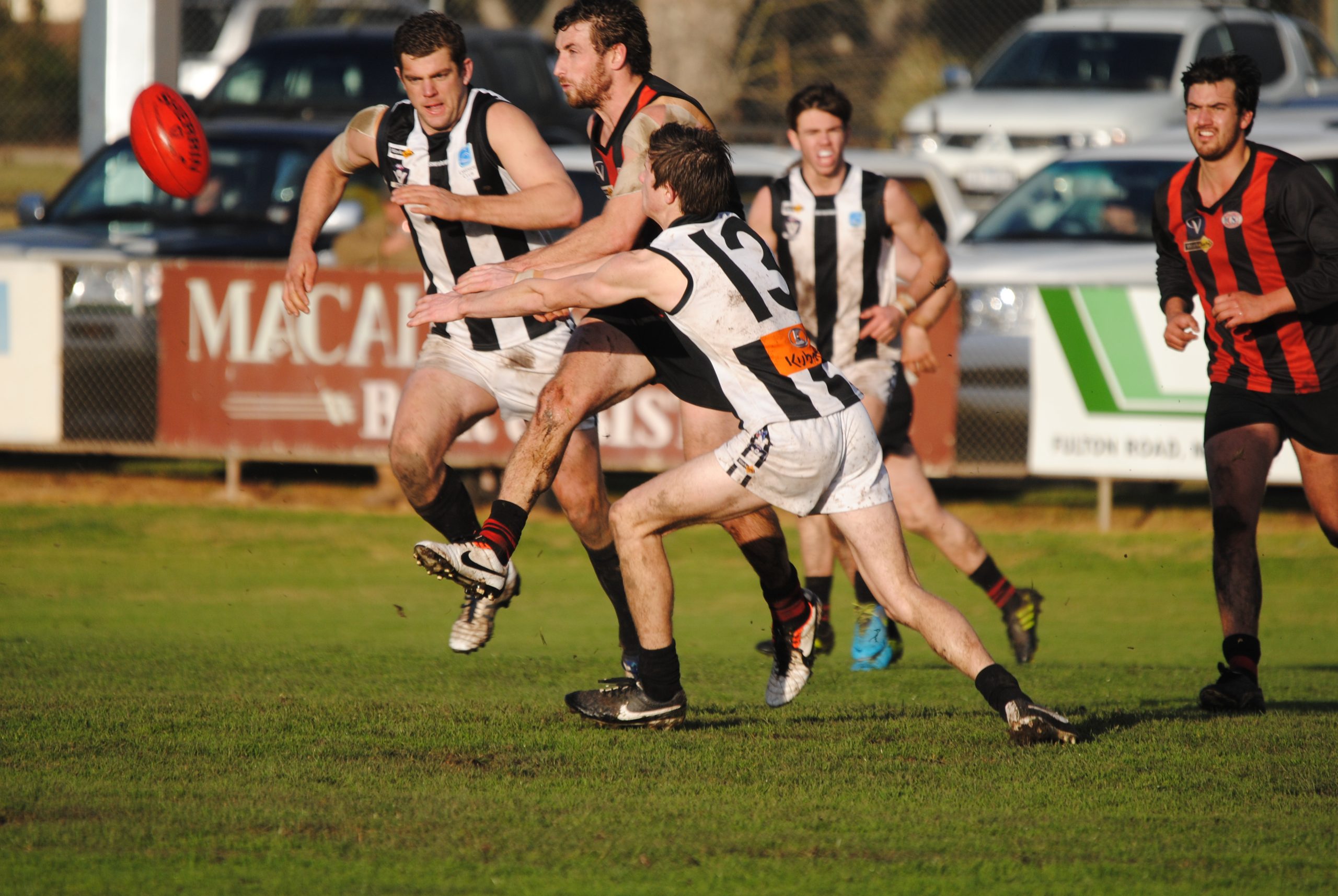 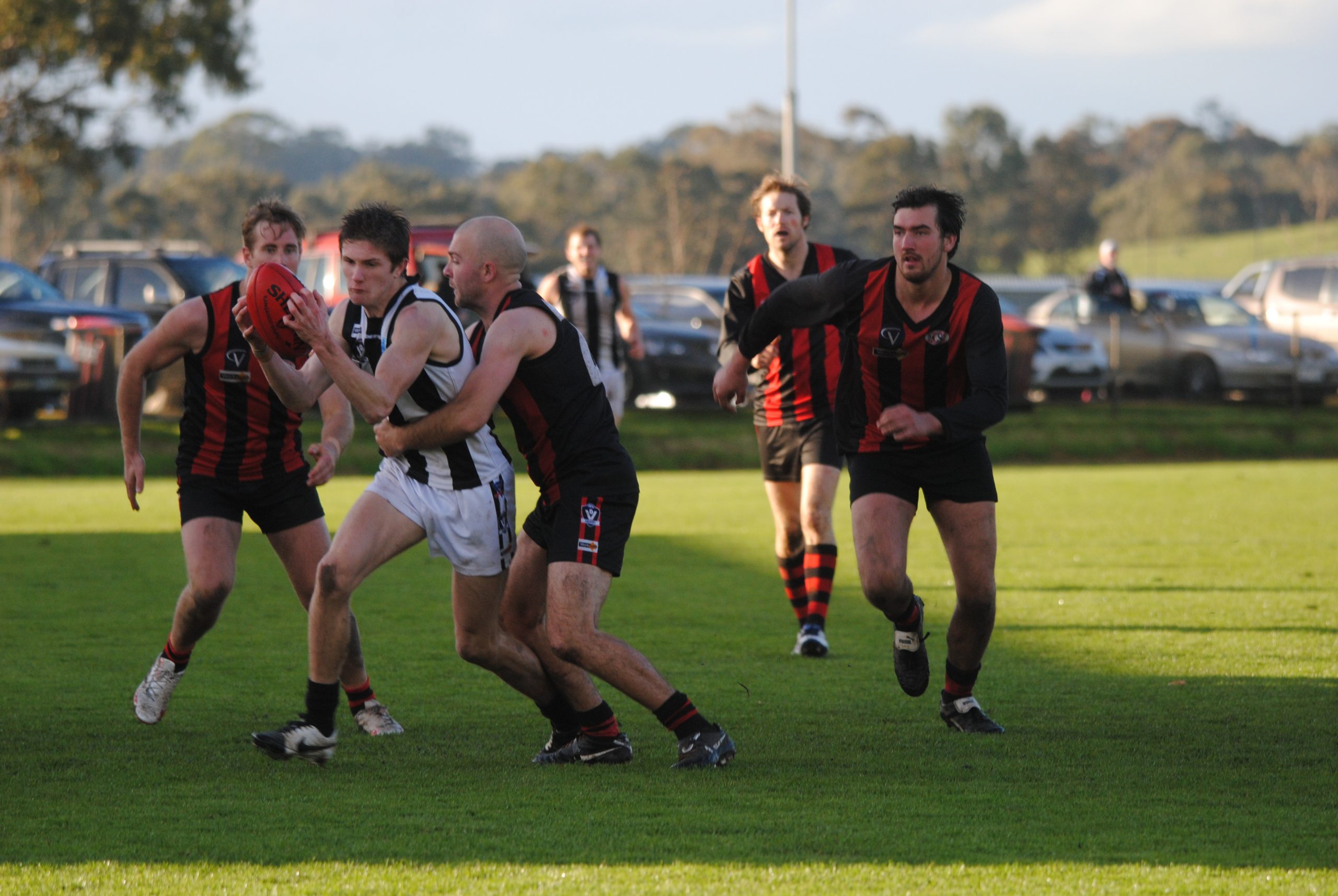 Sale handed out a 50-point drubbing to Maffra on Sunday to maintain its top position on the Gippsland League football ladder.

In the final analysis, Sale’s 29 scoring shots to Maffra’s 14 told the story.

Following an even first quarter in which both sides kicked two goals, the visitors powered away holding the disappointing home side goal-less in the second and third quarters.

The Eagles’ cause was not helped when Ben Coleman left the field early in the first quarter with a shoulder injury.

It took mid-way into the final quarter for the Eagles to post their third goal.

Led superbly by captain coach Matt Ferguson (five goals), the Magpies, with six regular players missing from their side, had the entire team contributing to the win.

The youngsters replacing them were impressive, especially Bohdi Walker, Brendan Brew and first game player Brad Dessent being the stand-outs.

Key Maffra forwards Darren Sheen and Daniel Bedggood were well-contained by the tight Sale defence. The evergreen Shane Fyfe, who, like wine gets better with age, won the traditional Carter-Hill Medal for best-on-ground, having roamed far and wide amassing numerous possessions.

At no time did the Magpies allow the Eagles to break away. It was left to Maffra’s Dan O’Brien and James Hammill to provide some drive from the midfield with Joel Lambourn and Ben Durrant lending some support, however generally most of the

Eagles were not equal to the task.

In the midfield Sale’s Jamie Sweeney led the way with eight tackles and was typically hard at the ball.

The Magpies dominated the contested possessions and their second and third efforts were commendable. Sale’s desire to get the ball first and their clean use of the ball stood out.

At half time the Eagles needed a big effort from their forwards to provide scoreboard pressure but nothing was forthcoming – the Magpies defenders were simply too strong giving the Eagles no easy kicks.

In the ruck duels Maffra’s Owen Booth and Brent Connelly had an interesting contest against Sale’s Jack Lipman with honours about even, although Lipman’s marking around the ground was superior for the Magpies.

Maffra’s aspiration to make a top three position now looks in jeopardy, whereas the Sale’s main problem appears to how fit the players returning from injury into the side.

Maffra was too strong for Sale in the reserves, winning 8.13 (61) to 2.1 (13). The Eagles are two wins ahead of Traralgon on top of the ladder, while Sale needs another win to seal a place in the finals.

Only two goals were kicked in the under 18s with the players battling the wintry weather. Sale won 1.7 (13) to 1.2 (8) with both sides to play in the finals.

The under 16s also found scoring tough, with the Eagles winning 3.6 (24) to 1.6 (12). Both sides are in a three-way battle to claim the double chance during the finals.

WONTHAGGI strengthened its hold on third spot with a vital 49-point win at Bairnsdale.

With the 15.6 (96) to 7.5 (47) victory, the Power is now six points ahead of fourth-placed Maffra with two round remaining. The Redlegs are now only two points ahead of sixth-placed Traralgon, whoever have two easier matches to play than the Maroons.

The Power set-up the win with five unanswered goals in the first term before adding four to two in the second to lead by 43 points at the main change.

Fortunately for the Gulls, the Maroons were wasteful in front of goal, preventing a bigger margin.

After a tight first half, the Parrots were poised to upset the Tigers after kicking five goals to two in the third term.

Tom Crosby stood tall in the ruck for the Tigers, Zach Anderson was prominent in defence, while Dan MacDonald kicked five goals.

For the Parrots, Zak Vernon and Tom Marriott were outstanding in the midfield, while Nick Nagel booted four goals.

COACH Adrian Burgiel, in his second game back from knee surgery, kicked five goals to help Moe record its fourth win of the season.