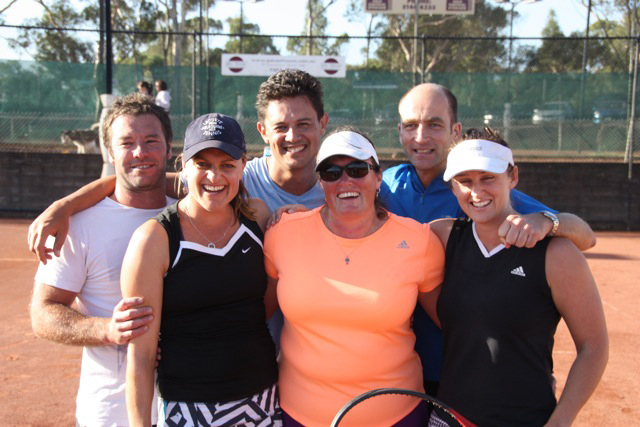 SEASPRAY clinched the Wellington section one tennis premiership following a seesaw battle with the Maffra Aces in Saturday’s grand final.

Going into the final mixed doubles clash both teams were locked at four sets apiece, however, Maffra held the upper hand with a three-game lead.

After a day of close matches, Seaspray’s Billy Trotter and Jo MacTier who proved to be too strong for the Maffra mother and son pairing of Jill and Ben McAnulty, winning the set 8-3 to guarantee their side the victory.

Earlier in the day, Seaspray’s men continued their dominance, sweeping all three sets. In similar fashion Maffra’s women lead the way for their team taking out all three double’s rubbers on offer.

As expected, every game was crucial in the overall result as Seaspray emerged victorious five sets, 53 games to the Maffra Aces four sets, 51 games.

AFTER being the dominant team throughout, Sale The Block capped off a stellar season by taking out the section two premiership over Stratford.

Mark Kennedy, Josh Kennedy and Ray Weber got Stratford off to a strong start, taking out the first two rubbers before Pete Leeman and Colin Bath managed to win the final men’s doubles for Sale.

Sale’s women proved too strong for their Stratford opponents, sweeping all three sets to give their side the advantage leading into the mixed doubles.

From there it was never in doubt, as Sale won two of the mixed doubles rubbers on offer to take the clash six sets, 63 games to three sets, 44 games.

THE top two sides from the regular season battled it out in the section three grand final, with the Rockley Slammers defeating Longford.

Despite a spirited fight from Longford, the Rockley side continued its strong form to win the clash five sets, 62 games to four sets, 45 games.

Longford got off to a terrific start, winning all three men’s rubbers before Rockley’s women returned fire in similar fashion convincingly clinching all three sets.

In the mixed doubles, the Rockley team again had the upper hand taking out two sets to secure a much deserved victory.