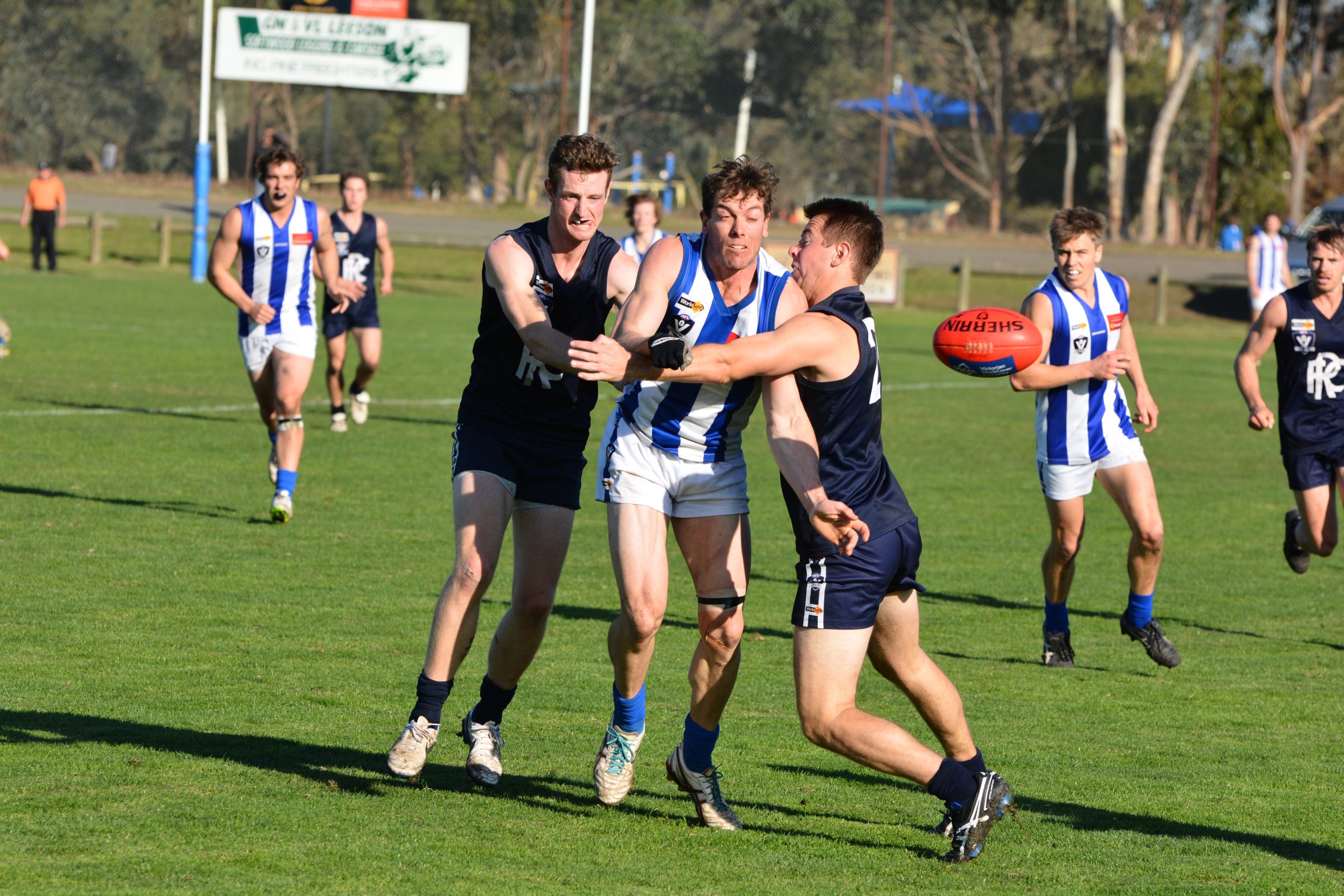 ROSEDALE and Heyfield will square off at Churchill in the North Gippsland football second semi-final, with the winner advancing to the grand final.

Ben Macreadie’s side has been at the forefront of the competition, hitting its straps during the second half of the season having claimed eight straight victories.

Four weeks ago, Rosedale was tested early by the Kangaroos before shaking the shackles to run home a 27-point victor.

Not dwelling on past results, Macreadie was realistic about the enormity of Saturday’s challenge having watched Heyfield last weekend.

“It was a tough game as you would expect in finals football in a year where any of the top five can beat anyone on the day,” he said.

“We know that the slate is cleaned in finals and past results will account for nothing this weekend.

“The intensity lifts ten-fold and contested football becomes so important. Whoever can win that early and get some scoreboard pressure sets themselves up for the win.”

With Heyfield’s seniors and reserve sides to compete on Saturday, positions in the line-ups will be highly sought with a number of tough decisions needed to be made by the club’s selectors.

Macreadie also admitted the make-up of his side wouldn’t be settled until later in the week.

“There are a couple of niggles that came out of our last game, but having last week off should have given them enough time to recover,” he said.

Among the changes may be the inclusion of a trio of former AFL players, who made their debut against the Kangaroos in round six. Ruckman Max Bailey, and midfield/forwards Andrew McQualter and Tim Clarke are all in contention for selection.

The Kangaroos will go into the contest full of confidence following Saturday’s qualifying final victory over Sale City.

Fully aware that the Blues have had their measure this season, the Kangaroos’ engine room will need to stamp its authority and dictate play on its terms. The battle in the middle of the ground is set to be an enticing one which will have a large say on the overall result.

Kangaroos coach Damien Birss will also be expecting a repeat performance from his key forwards with James Beha and Jesse Bedggood in impressive form.

Heyfield’s reserves team will also be in action tomorrow, when its meets Sale City, while Traralgon-Tyers United and Glengarry will contest the thirds second semi-final.

HAVING struggled to maintain its groove during a costly third term last Saturday, Sale City will need to put a halt to the run and firepower of Churchill.

The Cougars come into Sunday’s knock-out first semi-final at Heyfield following a convincing 52-point win in the elimination final against Traralgon-Tyers United.

Scraping into finals contention in the concluding round of the home-and-away season, the Cougars pulled together what coach Allan Chandler described as some of their best footy last Sunday.

“If we are going to keep on progressing through this finals series that’s exactly what we’re going to have to do. We have to do that every single week,” Chandler said.

“Our second half is probably some of the best footy we have played, we put the pressure on.

“I am very happy with the way that we played on Sunday. We seem to be building, but we know that one bad performance and it is season over.

“City have beaten us both times this year. We need to be better on Sunday that’s for sure.”

While the ledger is in favour of the Bulldogs, the contests have been far from one-sided affairs.

City sealed victory by two straight kicks in round three under lights on Anzac Day after the Cougars led at every change.

In their second meeting, the Bulldogs opened the floodgates during a six-goal to one third term. Trailing by 39 points, Churchill made a late charge to reel the margin to 14.

“They have good players all around the ground: (Matt) Lutze, (Brendon) Rathnow, (Hayden) Burgiel, (Mitch) Bennett, (David) Piasente and (Jake) Schuback, the list goes on so they are a difficult team to match up on,” Chandler said.

“We know that we need our best performance of the year this Sunday.

“Our entire team made contributions throughout the day on Sunday, we will be looking for another performance like that against City.”

With both sides renowned for playing hard and fair footy, there will be a number of deciding contests around the ground which could be the difference come the final siren.

The Cougars’ back six is one of the best in the competition and generates plenty of run off half-back.

Livewire Hamish Towns booted six goals last weekend and can add several goal assists to his stats. Chandler will be looking to the likes of Towns, Nick Campbell, Tim Darby and Brendan Holt to continue their impressive form in attack.

In the reserves, Churchill will meet TTU, while Woodside and Yarram will clash in the thirds.