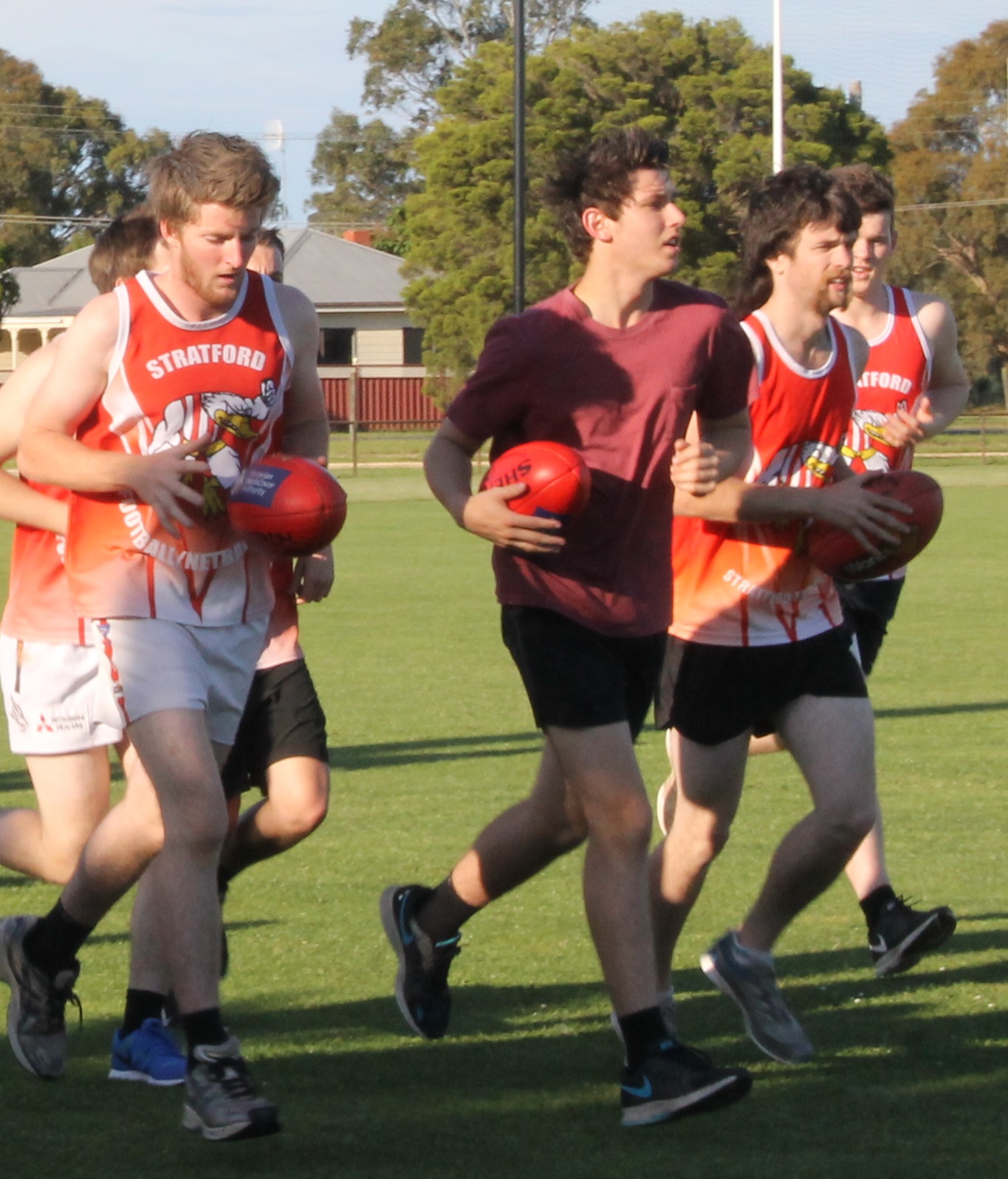 THE East Gippsland Football-Netball League season begins on Saturday with games in Boisdale, Lindenow and Wy Yung in the afternoon, with Paynesville heading to Lakes Entrance for a night match.

Boisdale-Briagolong will host local rival Stratford in what is expected to be a close match.

Premier Wy Yung will take on Lucknow, while Orbost-Snowy Rovers will travel to Lindenow to face last year’s grand finalist.

Several new coaches are entering the league, with the majority focusing on consolidating their younger players.

The Bombers will be hoping to improve on their first season in the EGFNL, after moving from the North Gippsland league. Despite finishing second last, they did have more wins than the year before.

Now that they have a better idea of what they are up against, the Bombers’ hope to prove more competitive.

Experienced John Tyquin, who takes over as coach, will also improve the situation.

STRATFORD will head in to the 2016 season with a line-up of young and developing players.

After losing both its finals matches last year, Rowan Marsden has taken over as senior playing coach from the retired Peter Morrison.

Marsden is a local Stratford player who won the club’s senior best-and-fairest in 2004, and has played in a senior premiership with Stratford before having stints in South Australia and Queensland.

The club has also picked up dual Boisdale-Briagolong best-and-fairest Regan Tait and Jake Costigan from Buchan.

The Swans have achieved success since joining the East Gippsland league with a senior premiership in 2014 and back-to-back reserves flags the past two years.

Stratford’s netball teams are also expecting to do well after winning a third consecutive A grade premiership last year, and second consecutive B grade title.

SENIOR premier Wy Yung will be the team to beat this season, after defeating Lindenow by a narrow margin in a closely fought grand final.

However, its netballers will be hungrier, after losing the A grade final by a single point last year to Stratford.

Football-wise, Will Hamilton is likely to be picked up for more Bairnsdale games, while the first few weeks will see more rookies get a game.

Only 10 premiership players will have a run in the first match against Lucknow, because of university and other commitments.

Coach Grant Mooney said the under 18s would be given a leg up.

“We’ve lost four of our talls, so this year it’ll change how we play a little bit,” he said.

“I think we’ll still be competitive, based on the intraclub and practice matches.”

LUCKNOW has recruited well, with players from Bairnsdale, Bruthen, and Lindenow South bolstering the team.

Coach Rhys Robinson has a single focus, making the finals.

“We finished a game and a half out last year, so we’re going to do better than that,” he said.

“The prep’s been good, we’ve got a bunch of new blokes in.”

The team is working on its running and defensive game, which will hopefully give it an edge this season.

Lucknow’s netballers have also recruited strongly, with senior coach Courtney Evans optimistic about the year ahead.

ORBOST-Snowy Rovers is looking forward to developing its young team, after a difficult season last year.

Senior coach Daniel Waddell said the standard of the league was lifting.

“Last year was tough, we had one win, but we’re hoping to improve on that,” he said.

“The pre-season hasn’t been too bad, we’ve had a bit of work to do.”

The club’s juniors have been working hard, with a focus on leadership.

“They’re still improving, there’s no limits on what they can do,” Waddell said.

New assistant football coach Tom Smith is expected to help the improvement after moving from Bairnsdale.

LINDENOW will be hoping new senior coach Kane Ashwood will steer the Cats to the flag this year.

The former Wy Yung premiership captain and 2008 joint league best-and-fairest will be focusing on developing and strengthening the younger players.

After going down by seven points in last year’s grand final against Wy Yung, recruitment has been strong.

Three best-and-fairest winners could be lining up in the new-look midfield, with Luke Dyer and Bayden Ashwood rejoining from Bairnsdale.

Angus Fortune, originally from the Loddon Valley league, will add much needed height to the centre, as well as formidable skill as a development coach. Fortune has previously played with Bendigo in the TAC Cup.

PAYNESVILLE has been training hard, with some key new additions.

After reaching the finals for the past three years, the aim this year is to break through and win one, according to coach Darren Martin.

“We want to go a bit deeper than the first week,” he said.

It’s hoped that players like Mathew Davidson, a forward from Serpentine, will step-up and strengthen some deficiencies in the team.

Tom Sabell will be joining his best-and-fairest-winning brother Jordan as well.

The team comfortably defeated Newborough in a practice match recently, and is ready to take the fight to Lakes Entrance tomorrow night.

LAKES Entrance is expecting to have a strong and competitive season, after a successful pre-season across all grades.

New senior football coach Nathan Pegler has been a welcome addition after many years as captain of the senior side.

Peglar has brought his experience and passion for the club to the fore and it has flowed through all the grades.

“Training has been enjoyable and the club has a really good feel about it,” according to club president Danny Moorhouse.

With three premierships last year and a runner-up, the Seagulls are looking to build on that base and take it to the next level.

After a long spell out of finals action, the football department is aiming to return in September.

Lakes is continuing the relationship with the Tiwi Islands, with another couple of boys coming down for the season.