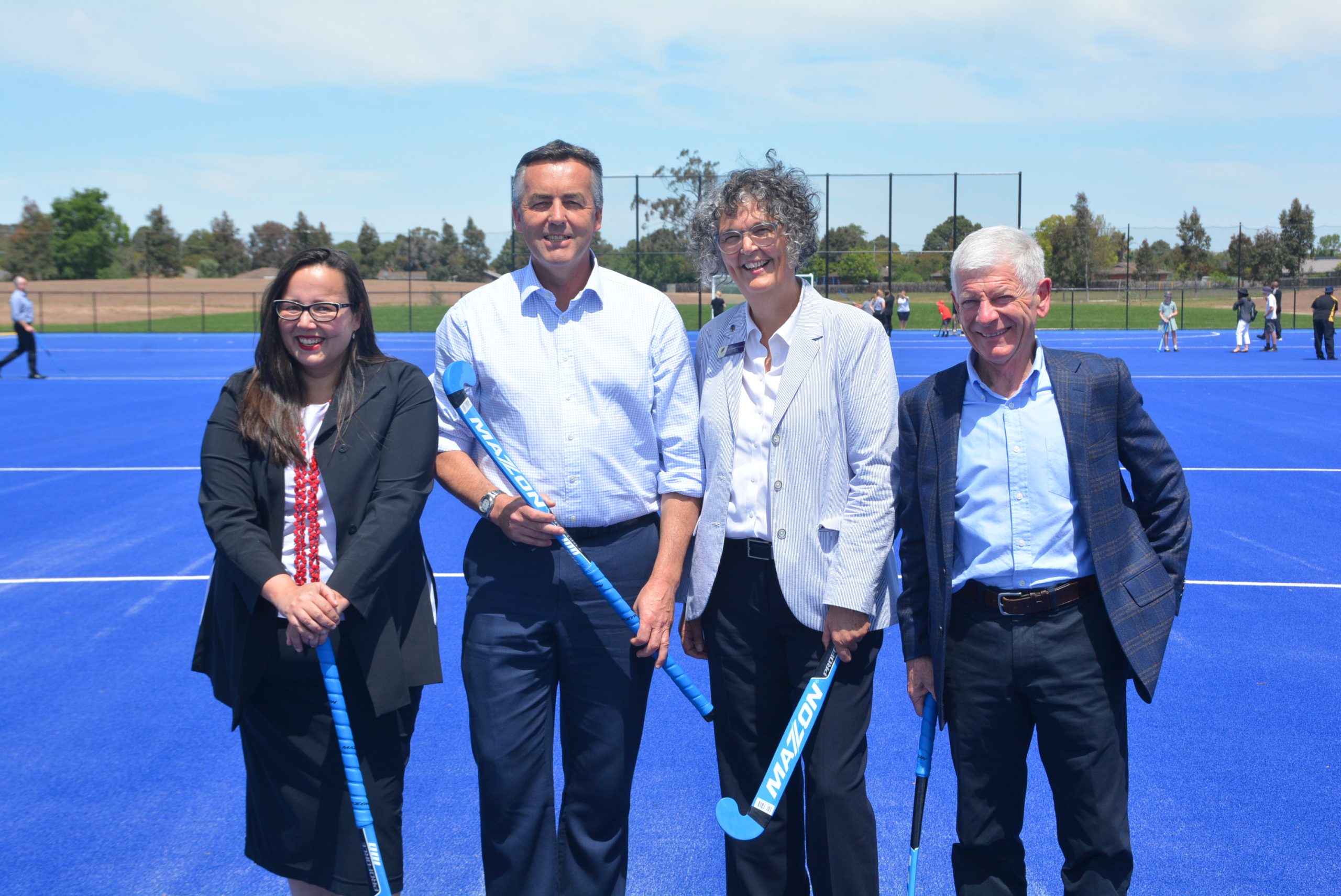 THE opening of Gippsland’s newest multi-purpose synthetic hockey pitch and pavilion has been welcomed by a number of enthusiastic user groups.

Three hockey clubs — Sale, Wellington and Maffra — who had previously played at separate grass grounds, will come together as co-tenants of the district’s latest state of the art sporting facility.

The $3.6 million project, which includes a synthetic multi-use hockey field, a secondary synthetic practice area and modern pavilion with inclusive change room facilities, as well as a fully-equipped kitchen and meeting spaces, was paid for by Wellington Shire Council contributing $1.3 million, the John Leslie Foundation $1 million, state government $650,000, federal government $600,000, and $50,000 from the hockey clubs themselves.

Local and federal MPs were some of the dignitaries at the official opening on Tuesday, with Eastern Victoria MLA Harriet Shing praising the work put in to get the facility up and running.

“This fantastic new complex is an incredible boost to Sale’s sporting community and will enable more members to play more often and to take their sport to a whole new level,” she said.

The project marks the start of an exciting era for local sports, especially for teams in the East Gippsland Hockey Association, who had been struggling without a quality competition standard pitch, being forced instead to play on grass.

“With the new lighting as well we will be able to play games all year round, and heading into next season we are going to be able to attract so many more players,” Holmes said.

The three co-tenants of the facility will be working together to ensure all are able to enjoy the resources on offer and will profit from canteen sales on a rotation basis.

“Further down the track we also want to host premier league games, and we now believe we have the capacity to do that,” Sale Hockey Club president Mark Benfield said.

The opening granted an opportunity for local school kids to get first use on the new surface, as they took to the pitch with sticks in hand to have a casual hit with both teachers and politicians.

Holmes said the centralisation of the three clubs would in turn get more juniors involved in hockey, creating further opportunity for children of all ages and abilities to compete.

“One of the things we are proud of is our all abilities team, which came third in the Victorian specialist schools competition recently,” Holmes said.

The thoughts of the club presidents were shared by Hockey Victoria general manager Sash Herceg, who foresaw the complex would revitalise hockey in the area.

“We are a sport that caters for ages from five to 75, so to have this new facility here will enable us to provide so many people with somewhere to play,” he said.

The construction of the project may well not have been possible had it not been for a fateful article published in the Gippsland Times, that got local philanthropist, the late John Leslie thinking, according to John Leslie Foundation trustee Brian Castles.

“John was actually reading an article in the Gippsland Times, when he found out about the poor state of hockey in Sale, so he got the ball rolling from there,” he said.

“His father played a bit of hockey and John’s vision was to always make Sale the most attractive town it could be so he was more than happy to put funding toward it.”

Gippsland MHR Darren Chester also took time out from his hectic schedule to speak at the event, saying the complex would facilitate a multitude of uses.

“I may have to take a hockey stick back to Canberra with me,” he joked.