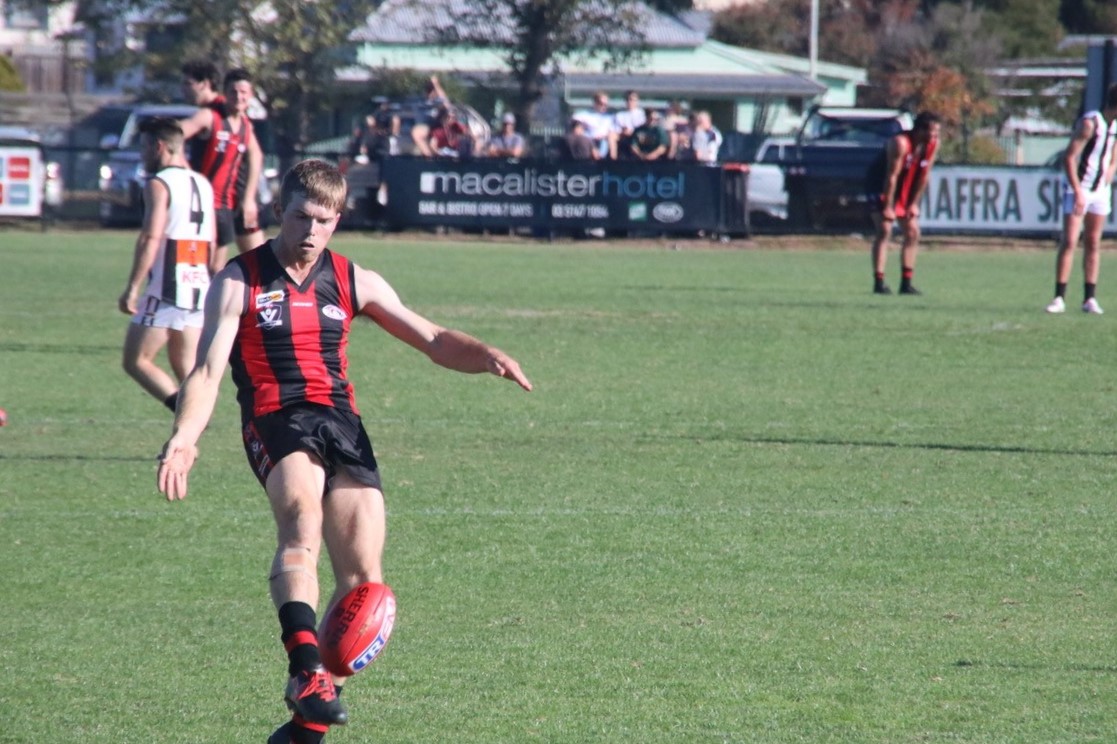 MAFFRA defeated Sale by 74 points to begin round three of Gippsland League football on Good Friday.

Sale was forced to make a number of changes from the side which defeated Warragul. The gravity of the situation meant Mitch Bown was given his debut after playing in the thirds earlier in the day.

A big name was cleared back to Maffra during the week in former Port Adelaide AFL player John Butcher, son of Eagles coach Wayne.

With a large crowd on show, Butcher would start in the ruck with his goal from long range showing his potency when pushing forward

The battle between the two midfields was tough. With Sale having both Dowse boys at stoppages, the intensity was high, but the Eagles’ onball brigade outmanoeuvred a Magpies team missing stars Jordan Dessent and Kane Martin.

Both Carr boys and Danny Butcher were controlling play early.

Clean slick ball movement by foot and their spread from the contest generated plenty of forward entries, but the experienced Justin McLay who seemed to read the ball better than others.

Signs were ominous for the Magpies, as the Eagles led by 13 points at quarter-time.

James Read was forced to ruck in the absence of Kieren Jones, and his ability to compete with Jack Lipman was limiting the big man’s effect.

Mitch Bennett and Hudson Holmes were getting plenty of ball on their respective wings, while Maffra’s more mature bodies showed up the younger Magpies.

The Eagles slammed on eight goals and didn’t allow Sale to score as it couldn’t effectively work the ball forward.

A half-time margin of 52 points opened up and the game was effectively done and dusted.

Sale began the second half with some momentum, but shallow entries allowed Maffra to play with its typical clean slick ball movement from the back half. The saving grace for the Magpies was the errant kicking of the Eagles, one goal from a Bennett snap was the only highlight of the quarter.

As the final quarter began, the contest between Mitch Thacker and John Butcher became the game’s main focus.

The margin on the scoreboard meant there was no chance of a comeback win, but every time Butcher went near the ball, Thacker was right with him.

Butchers’ famed kicking for goal probably cost him a couple more goals, but Thacker did really well in the contest.

Jack Johnstone went forward during the final term, with Curley Nettleton by his side causing headaches for the Sale defence. Both would kick goals as the game drifted along.

To the Magpies’ credit, they never dropped their competitive spirit, taking that as a positive in a disappointing day.

Read was competitive in the ruck, but it was the mature Eagles in Johnston, Alex and Ed Carr and Danny Butcher who were the difference. Bennett, with three goals from a wing, was also good, while the presence of Sam Pleming down back had an unsettling effect on the Magpies’ forwards.

For the visitors, Thacker and Chris Laverty’s games in defence were competitive, but it was McLay who was outstanding for the Magpies.

Mitch and Nic Dowse battled hard on ball for the Magpies and Jayden Allison found plenty of the football.

Brad Dessent was the most destructive forward for Sale, kicking two goals and competing well.

Maffra will take on a resurgent Morwell, while the Magpies will battle Traralgon in a special day for the clubs as they marks the 20th anniversary of the death of Peter Hug.

Mitch Hayes led the way for the Power in the midfield, while ruckman Toma Huther kicked three goals.