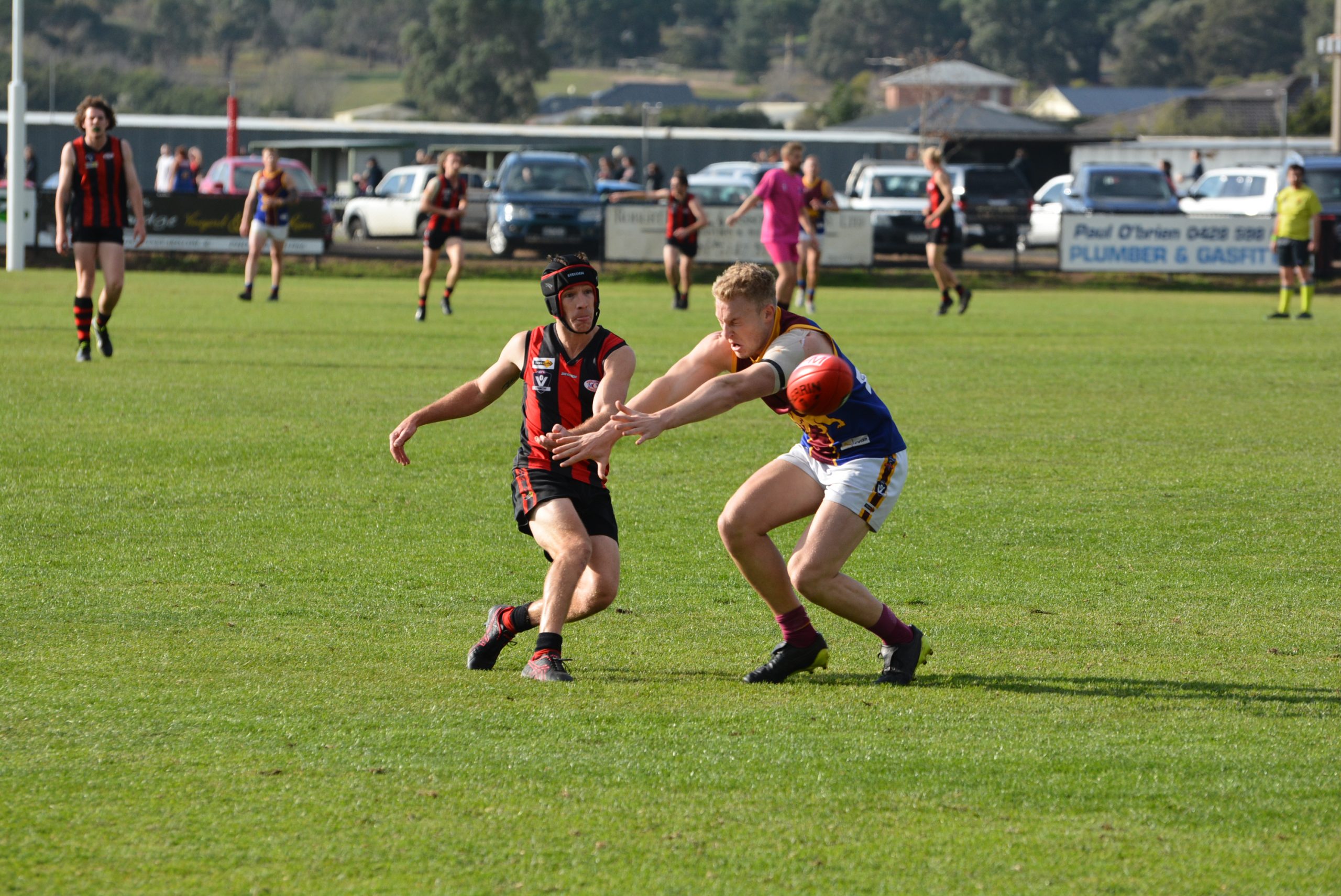 Maffra’s patience was tested by the Lions’ pressure, restricting the Eagles’ ability to move the ball out of defence quickly, but the hosts responded well.

Aided by the return of former AFL player Bernie Vince, the Lions had opportunities to kick goals, but the Maffra defence was strong and able to stop numerous attacks.

In his return to the side from suspension, James Huts made his presence felt at full back.

Kade Renooy’s work across halfback found a back way through the Moe press.

Alex Carr was strong in midfield, winning the ball with his hard work.

Up forward, Tom Jolly, Daniel O’Brien and Daniel Bedggood made the most of their teammates’ efforts, particularly in the second half. Mitch Bennett and Jack Johnstone, who played in attack in the absence of John Butcher and Andrew Petrou, kicked three goals each.

The Eagles marked Winston Gieschen’s 200th game, which was played last week at Wonthaggi, but celebrated at home.

Struggling to get the ball forward early, the Eagles found a way through four minutes in, when a Carr kick found Johnstone to kick the opening goal.

The Lions responded with a goal soon after to level scores.

Neither side had many clear chances to kick goals, a result of both teams’ pressure.

A Jolly smother off the Moe kick outside the Maffra attacking 50 metre arc resulted in the ball getting to O’Brien, who kicked it to Renooy in space. Renooy’s goal was answered by the Lions’ second major of the term, to give them a one-point lead at quarter-time, not enough considering they had the aid of the breeze.

Now kicking with the wind, the Eagles lifted in the second quarter.

A 50m penalty gifted Bennett’s first goal of the day to give the Eagles back the lead. From resumption of play, O’Brien’s run out of the centre square set up Bennett’s second, stretching the margin to 11 points.

It took another 11 minutes for the next goal to come, with Johnstone finishing a quick transition from defence.

Moe’s first goal of the term came approaching time-on, when Dylan Farrell was left to wander alone in the Lions’ forward line.

Carr set up a goal for Bedggood to give the Eagles a 20-point lead at half-time.

The Eagles kicked three goals for the quarter, including one from Johnstone following a strong mark taken in a one-on-one contest.

Trailing by 28 points at three-quarter-time, Moe kicked the first goal of the final term, but, with the Lions looking to make inroads into the deficit, the Eagles kicked two majors on the counter.

Joel Bragagnolo worked hard in defence for the Lions, as did Darnell Grech.

Despite three straight defeats, the Lions remain in third spot on the ladder.