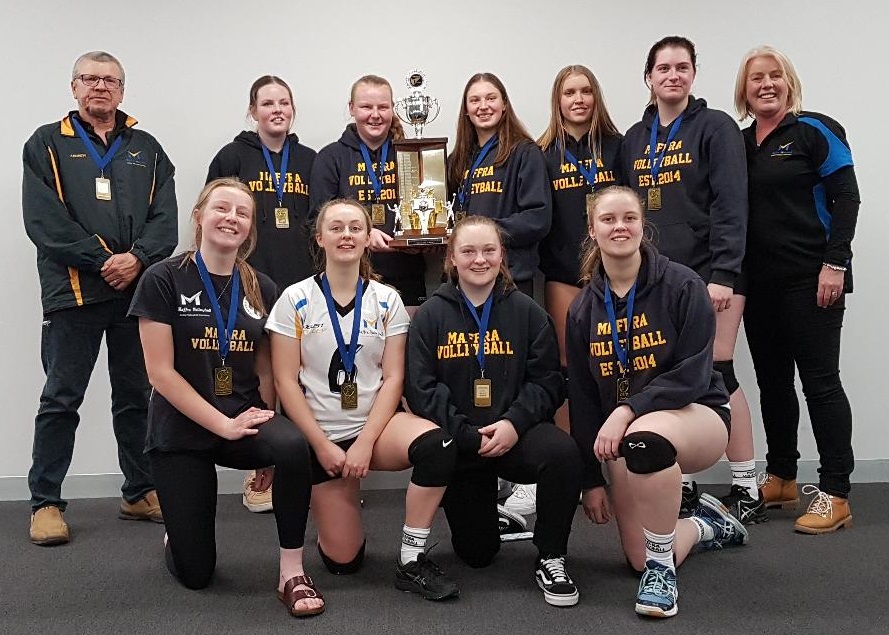 MAFFRA Volleyball Association women had a successful tournament over the Queen’s Birthday long weekend, winning the division two competition in the annual country championships in Bendigo.

This is the first year Maffra Volleyball has entered a women’s team in division two, and did so with little thought of success. There were seven teams entered in this division, with most teams coming from large regional centres such as Warrnambool and Bendigo.

The first day of competition saw Maffra defeat Warrnambool and Bairnsdale, while losing a late game to Sunraysia.

On the second day, Maffra had two early wins over Bendigo and Latrobe Valley, coming from behind to win both matches in five sets, leaving Maffra needing to defeat South Gippsland in its final pool game to book a spot in the gold medal play-off.

South Gippsland, with vastly more experience and height than the Maffra girls, took out the first set comfortably. Maffra slowly clawed its way back into the contest, mainly as a result of serving strength, winning the next three sets to set up a grand final appearance on the Monday.

Maffra played Warrnambool Pirates, who had only lost one match during the pool games to finish on top of the standings, for the top prize.

The Pirates began strongly and never looked threatened in the first set, taking it out 25-18.

The second set continued in the same trend with Pirates taking a commanding early lead, but Maffra fought back to only go down 25-22.

The Maffra girls went from strength to strength from this point on, taking out the match and the gold medal by winning the final three sets, 25-17 25-14 15-10.

To cap off a terrific team performance, Bridie Williamson and Mikayla Underwood were selected in the All Star Seven players of the tournament.

Both girls played as pass/hitters, and showed excellent court coverage in the back court and powerful attacks from front court.

Captain Holli Oakley was an inspiration all tournament with her setting skills, accurate attacks and dynamic serving.

Kaylah Fink, the libero and most experienced player, was the team’s back court general. Her calm demeanour and excellent passing skills set a great example for her younger teammates.

Cassidy Stevens was a big improver during the tournament to end up a dynamic player in the middle position in both defence and attack.

The three youngest team members were outstanding during the tournament, as all three were asked to play unfamiliar roles.

Jas Underwood ended up sharing the setting duties for the final four matches. Her ability to also serve the ball at the feet of her intended opposition target won many points.

Kalarni White was asked to set in early matches, and then became a back court specialist, relieving the pass/hitters when they needed a spell.

Jade Leighton was effective as the second middle, winning many points with her precise attacks deep to the opposition court. She also made a significant block late in one game to turn the momentum Maffra’s way.

All nine of the girls came through the strong Maffra Secondary College volleyball program, with seven of them still attending.

This achievement was more remarkable when you take into account the girls had never played or trained together as a complete squad, several were asked to play unfamiliar roles during the tournament and being an open age event, most teams had vastly more experience.