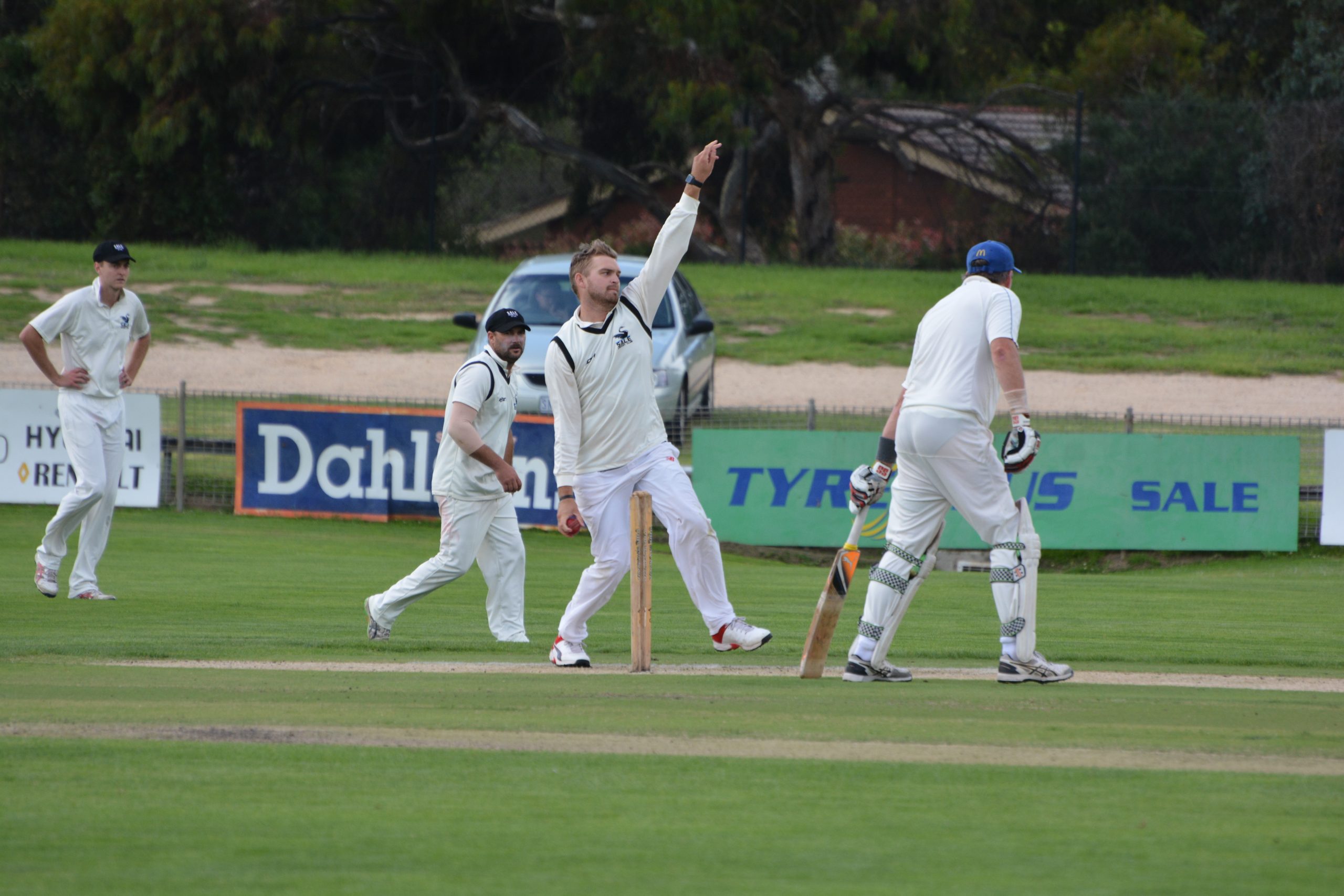 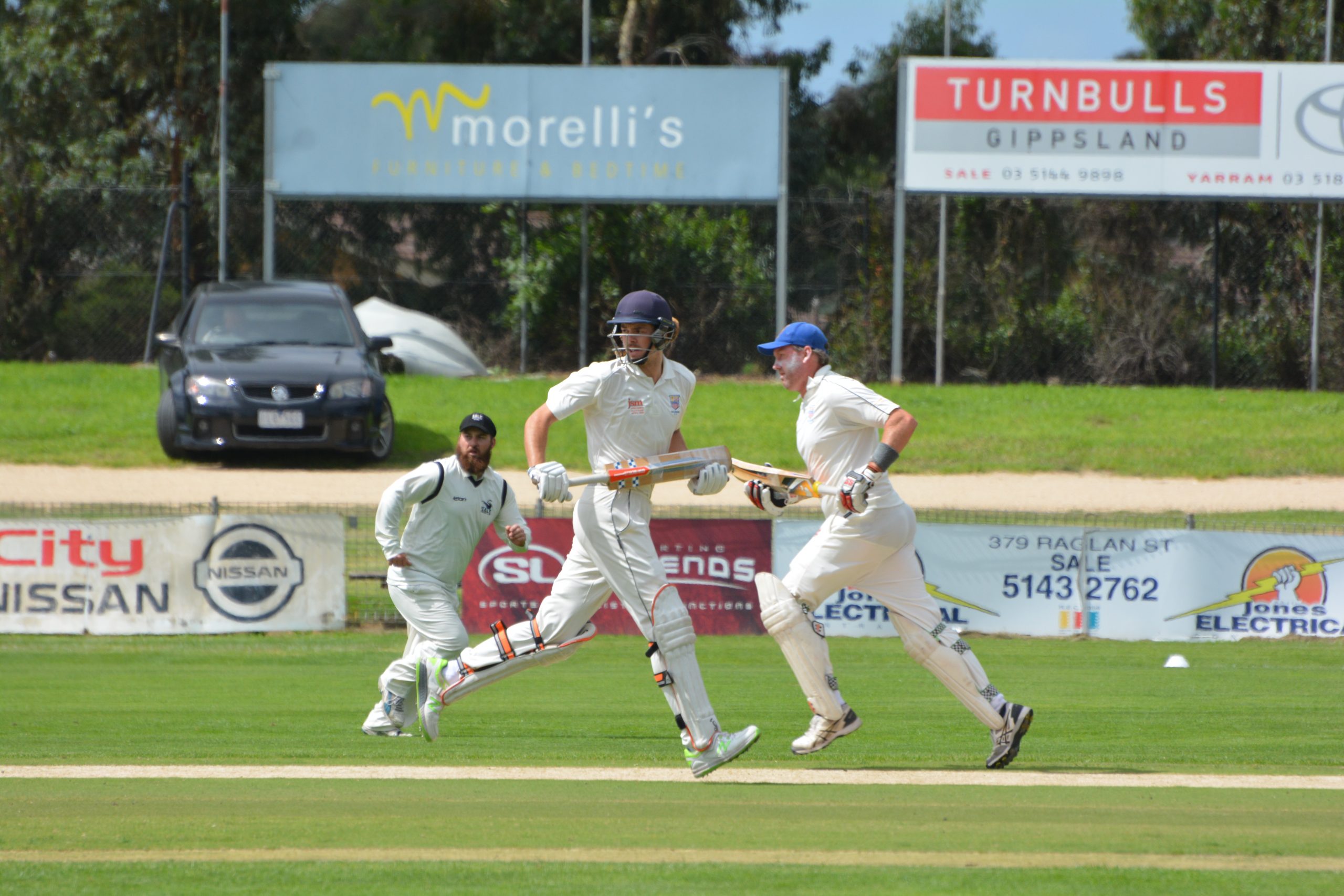 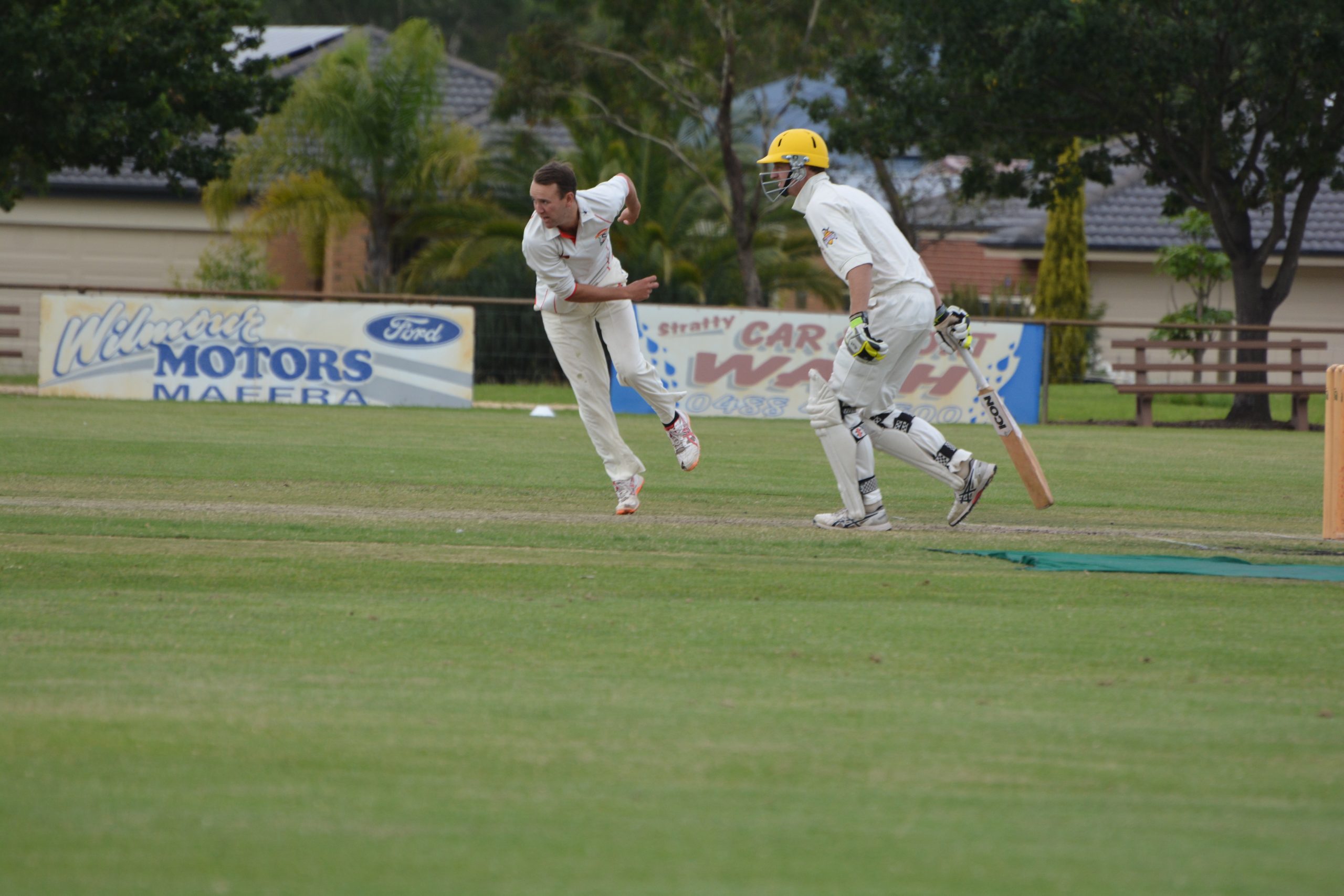 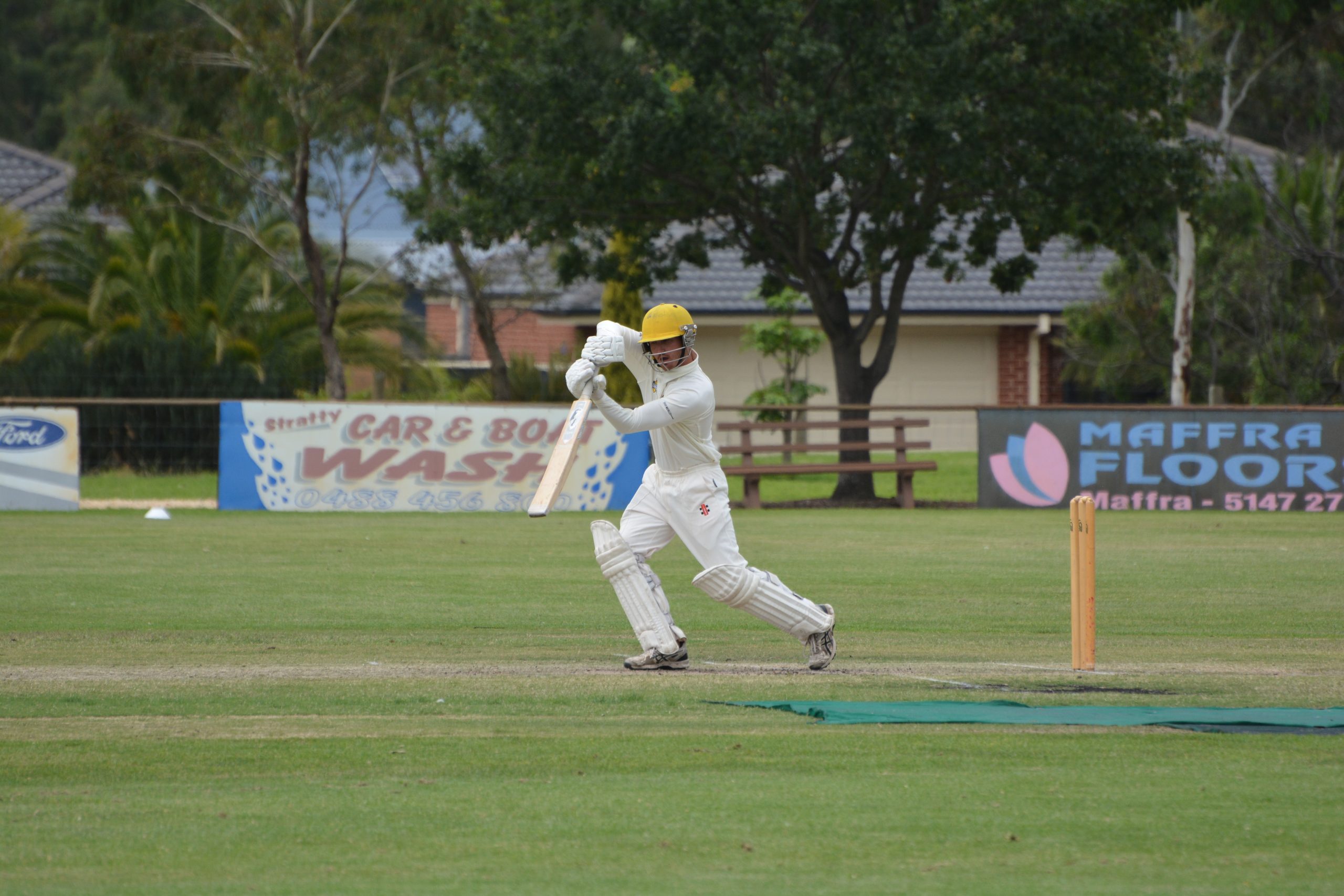 SALE will play Stratford for the Sale-Maffra cricket premiership this weekend at Bundalaguah following thrilling semi-finals.

Sale hung on for dear life against Collegians to crawl its way into the grand final, while Stratford needed an outright victory over Rosedale-Kilmany.

The Swans nearly undid months of hard work, but as they have numerous times this season, just found a way to win their semi-final.

Upon calling correctly at the toss, Collegians elected to bat first at Sale Oval, with openers Zac Hurley and Jack Tatterson walking out to face the music.

The pair got off to a steady start, getting the score to 0-27 before Tatterson fell to Andrew Nicholas.

This brought Adrian Burgiel to the crease, and with it, an air of anticipation.

The Sale players would have known if Burgiel got going, it could be the difference between them chasing less than 200 or more than 250.

Swans skipper Rohan Blandford sensed youngster Tim Dessent would be the man to dismiss Burgiel, as he had done so twice during the regular season. Dessent only bowled three overs for the innings, but knocked Burgiel over for just five with a big inswinging yorker.

Hurley was then joined by Matt Foster, who set about spending an extended period of time in the middle.

Collegians looked to be in control with the score 2-87, however, 13 runs shy of triple figures proved to be unlucky for College, as Foster was dismissed by a remarkable one-handed catch from Matt Raidal diving backwards at mid off.

Hurley followed a short time later for an innings high 57, as Dessent was again in the game, taking a catch off the bowling of John Mayman.

From there, Sale leaped at the opportunity to bowl to a pair of new batsman, and grabbed another wicket to leave Collegians 5-103.

Finals veteran Stuart Anderson came in at number seven and used his experience to score a handy 26, which pushed Collegians toward the 150 mark.

Effective slow bowling was the modus operandi for Sale, as eight wickets were taken by spinners. Coenie Nel was outstanding for the Swans, and finished with figures of 6-44 from 25 overs.

Nel took four consecutive wickets during the middle stages, including the key scalps of Anderson, Foster and Isaac Love.

Having bowled College out for 156, Sale players would have gone to bed on Saturday night feeling satisfied with their efforts.

Returning the next day, the Sale innings got off to a shaky start as Mayman, Nel and Luke Bates all departed cheaply, leaving Blandford to pick up the pieces in the early stages.

Blandford and Nathan Massey batted together for 10 overs, before Blandford snicked off to Tom Morrison for 35.

Love then got in on the act with the ball, and saw the back of Raidal and the big wicket of Ben Jones for a duck to leave the Swans in tatters at 6-73, still needing 83 more runs to win.

Dessent came to the crease and contributed some important runs at number eight, getting Sale close to the 100-run mark.

Collegians had Sale by the jugular at 8-117 with 18 overs still left in the day.

Importantly for Sale, Massey was still in, and the man for the crisis situation kept his cool batting with number 10 Andrew Nicholas. The pair took minimal risks to scratch their way to victory.

Collegians threw everything it had at Sale to win the match, in what was a cliff hanger which looked for all money to be pointing toward a College victory.

Massey brought up his half-century with two runs to get, before Nicholas hit the winning runs in the 10th last over of the game.

Massey walked off to a standing ovation, and ended with 50 not out from 164 balls in an innings which lasted three and a half hours.

Morrison bowled his heart out for Collegians, taking 3-28. Other multiple wicket takers were Anderson (2-24) and Love (2-34).

In hindsight, Blandford’s decision to bowl first in the final home-and-away match on the basis of his side possibly losing a toss in a final and having to bowl first may have proven to be a masterstroke.

STRATFORD had an equally nerve-racking win against Rosedale-Kilmany to earn its way to the grand final.

The Redbacks felt there was something on offer in the wicket on their home ground, and elected to bowl first after winning the toss.

The decision was clearly vindicated, as the Warriors struggled to negotiate the moving ball and were bowled out for 76.

The right arm seamer ran riot through the Warriors’ middle order, taking the wickets of batsman four to eight.

Fellow pace bowler Simon Williams was also effective, taking two of the first three wickets to fall, while left arm orthodox spinner Jack Rietshel did his average no harm with figures of 2-0.

Rohan Diamond top-scored for Rosedale-Kilmany with 34, but unfortunately for his team’s sake, the next highest score was extras on 11.

Having only lasted 38 overs, Stratford had a chance to win the match on the first day and rest easy on Saturday night.

The pitch still had plenty on offer, and the Redbacks’ reply got off to a disastrous start when they fell to be 2-9.

Opener Chris Aurisch took the pitch out of the equation and made 20 from 33 balls, before his dismissal triggered a procession as Stratford lost 3-8 to be 5-37.

Scott was doing as Wrigglesworth had done earlier, and had three wickets in his pocket by the 15th over. Ben Channing and Taylor Tatterson tried hard to negotiate the carnage, but their dismissals by Dylan Rowley left Stratford fretting nervously at 7-55.

The fighting spirit Rosedale-Kilmany is known for was on display, and having bowled unchanged for 12 overs, Scott took the wicket of Bohdi Walker before claiming his fifth, when Jonny Lash was caught and bowled to leave Stratford 9-70 – still seven short of victory.

The helpless Stratford players who had already been dismissed could only watch on as number 11 Simon Williams and Dylan Bolton batted for their season.

A huge sigh of relief was breathed by the Redbacks after Bolton tied the match with six runs off the first two balls following the dismissal of Lash, which meant Stratford could then afford to play a few more attacking shots.

The final Stratford partnership yielded 48 runs, to reach a total score of 118.

Seamers Scott and Rowley were the main players with the ball for the Warriors, with the former taking 5-30 and the latter 3-54.

With a deficient of 42 to overcome, Rosedale-Kilmany had to roll the dice to set up a tricky reverse outright to make its way to the grand final on the second day. The Warriors played their shots, with Scott top-scoring on 32 from 40 balls, as they were eventually bowled out for 116.

Wrigglesworth made it 10 wickets for the match with 5-48 in the second innings. He has been taking wickets for fun of late, with 19 poles in his last four innings.

Leading by 74, Rosedale-Kilmany was a sneaky chance when it had Stratford 2-17, but in the end Lewis Bolton (17 not out) and Tatterson, who played well for an unbeaten 44, got the Redback’s over the line.