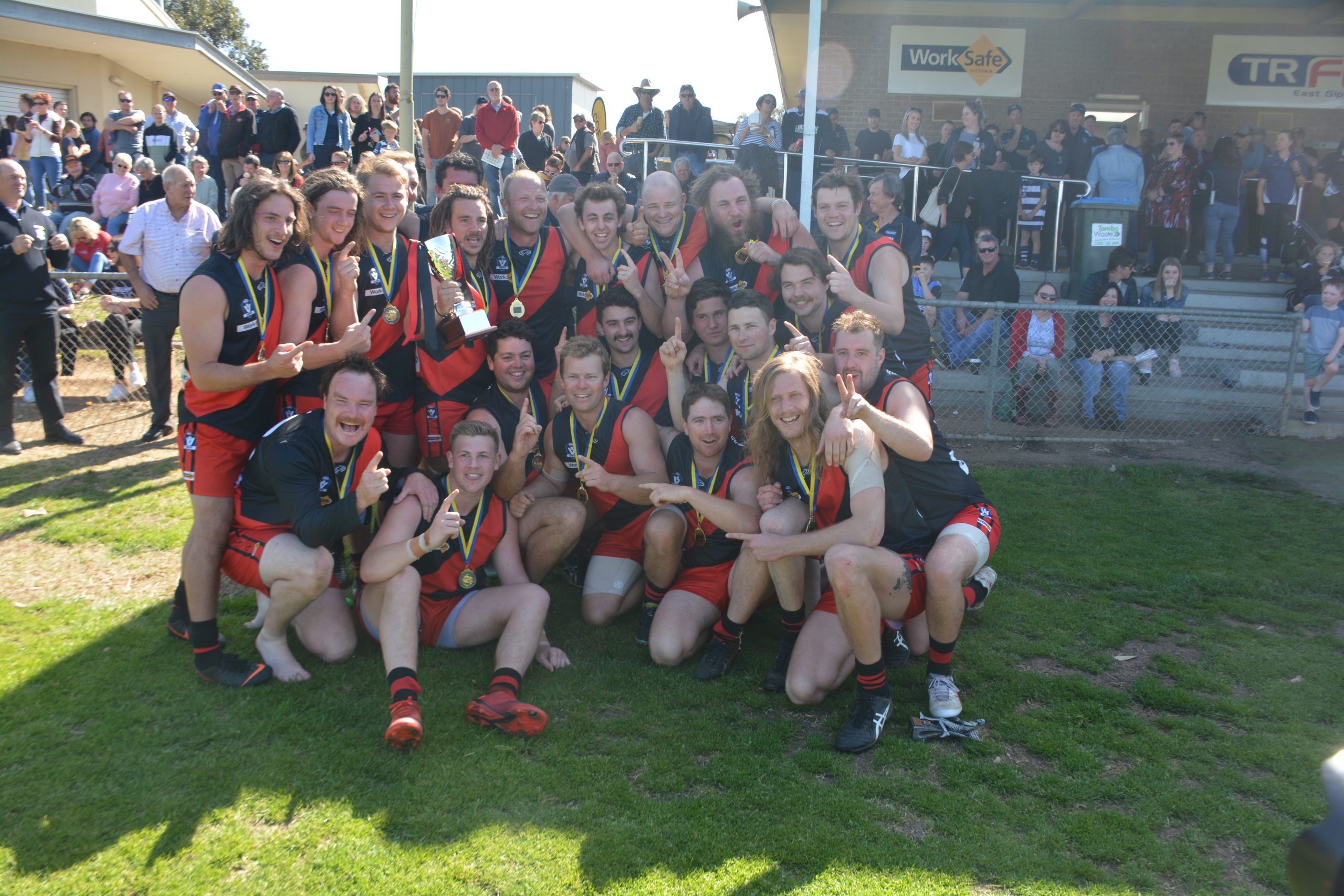 THE East Gippsland Football-Netball League saw many changes, during the past decade but a constant was Lindenow being in contention for silverware.

The departure of Bairnsdale opened the way for Lindenow to be the premier club winning four senior football premierships from seven grand final appearances.

The Cats were the only side to make the finals in all 10 seasons – their worst home-and-away season was in 2013, finishing fourth on the ladder with an 8-8 record.

The Cats won 72.39 per cent of their matches, only bettered by Bairnsdale’s 88.89 per cent from one season.

The EGFNL extended its reach into Wellington Shire during the 2010s, when Stratford transferred for the 2012 season, before Boisdale-Briagolong followed suit for 2015. The moves saw the Swans and Bombers renew acquaintances with former Riviera league rival Paynesville.

Beginning the decade struggling in the North Gippsland league – Stratford winning three matches in 2010 and ’11, and Boisdale-Briagolong 12 games in five seasons – the club’s fortunes improved with their moves. The Swans won 57.82 per cent of their matches since moving to the EGFNL and claimed two premierships, while the Bombers have won 47.02 per cent of the time.

At the start of the decade, the league had seven clubs who each played 16 matches and had three byes.

Bairnsdale finished a win ahead of Lindenow on the ladder after 19 rounds.

These were the stand-out teams of the season, with the Cats four wins ahead of third-placed Lakes Entrance. Wy Yung made the finals with a 7-9 record.

The Redlegs defeated Lindenow in the grand final by 60 points in their last game before returning to the Gippsland League. In 11 seasons, the Redlegs won seven EGFNL premierships and reached another two grand finals.

Lindenow went one better in 2011, defeating Wy Yung in the grand final by 62 points to claim its first senior premiership in 10 years.

The Cats and Tigers were level on points at the end of the home-and-away season, 20 ahead of Lakes Entrance.

Bairnsdale’s move resulted in the EGFNL only having six clubs, who again played 16 matches each. Four teams still reached the finals, with Orbost-Snowy only needing five wins to qualify that season.

The league returned to having seven clubs in 2012, with the addition of Stratford. While they couldn’t make a mark in the NGFNL, the foundations for the Swans’ success were laid with a hat-trick of thirds premierships from 2008 to 2010.

The Swans finished their first EGFNL campaign only six points outside the finals, with six wins and a draw.

Wy Yung won a second straight minor premiership, two points ahead of Lindenow, but were knocked out of the finals in straight sets.

Lucknow defeated Lindenow in the grand final by 57 points. The win was made sweeter by having to overcome a loss of premiership points.

The Magpies lost 12 points for playing a junior outside the permit rules, resulting in them finishing fourth on the ladder.

Stratford had its first taste of success in East Gippsland, reaching the finals and Corey Scholtes sharing the best-and-fairest with Lucknow’s Gary Jones.

The Swans thumped Lindenow by 80 points in the first semi-final, before succumbing to Lucknow in the preliminary final.

The Magpies were the top team of the home-and-away season, but lost the grand final to Paynesville by 20 points. It was the Gulls’ first premiership since 1984.

Stratford won its first senior premiership for 11 years in 2014 in dramatic fashion.

The Swans only lost one match for the season, but almost let the grand final slip from their grasp.

The Swans controlled the grand final for three quarters, before Wy Yung kicked four goals in the final term to take the lead with less than two minutes to play. A goal from Josh Kiss, his only one for the day, gave the lead back to the Swans by three points, with the final siren sounding immediately after play resumed.

It was a good day for the Swans, winning six football and netball premierships.

Paynesville’s Damien Ashcroft was recognised as the best-and-fairest, but the man who made the biggest mark on the season only played one match.

Former Carlton and Brisbane full forward Brendan Fevola kicked 15 goals in a one-off appearance for Lindenow against Wy Yung. Fevola played another match for the Cats the following season, against Stratford.

In 2014, the under 16s competition was moved from the Bairnsdale and District Junior Football League to the EGFNL, meaning four grades were played on one day.

Teams played 18 matches in 2015, with the addition of Boisdale-Briagolong taking the league to eight clubs. The Bombers finished in seventh place, with six wins. Their first premiership points almost came in round two, when the Bombers and Paynesville were level on the scoreboard at the final siren, only for the Gulls to be awarded a one-point victory after a discrepancy was found in the score-keeping.

Wy Yung was the minor premier, finishing six points ahead of Stratford, which fell out of the finals in straight sets. The Tigers defeated Lindenow by seven points in the grand final.

A Paynesville player again won the best-and-fairest, with Jordan Sabell given the honour.

In 2016, Boisdale-Briagolong again finished in seventh place with six wins, while Stratford fell to the bottom of the ladder, winning one match.

Lindenow turned around a second semi-final loss to Paynesville, defeating the Gulls by 47 points in the grand final.

The Cats went back-to-back in 2017, losing only once during the season. After finishing the home-and-away season seven wins ahead of Lucknow and Orbost-Snowy Rovers, the Cats too strong for the Magpies in the grand final, claiming the premiership by 42 points.

Stratford returned to the finals, finishing two points ahead of Wy Yung, but lost to Orbost-Snowy Rovers in the first semi-final. For the third straight season, Boisdale-Briagolong finish seventh with six wins.

Stratford returned to the top of the tree in 2018, claiming the premiership and having Lachlan Heywood winning the best-and-fairest.

The Swans claimed the minor premiership on percentage to Lakes Entrance, and overcame the Seagulls in a tight grand final by 10 points.

After finishing second on the ladder, the Bombers defeated Lindenow in the second semi-final, but the Cats were too good in the grand final, winning by 47 points.

Stratford went 10-8, but were four points outside the finals. Following a review of Gippsland leagues, the EGFNL under 18 and 16 competitions were replaced by an under 17 age group for the 2019 season.