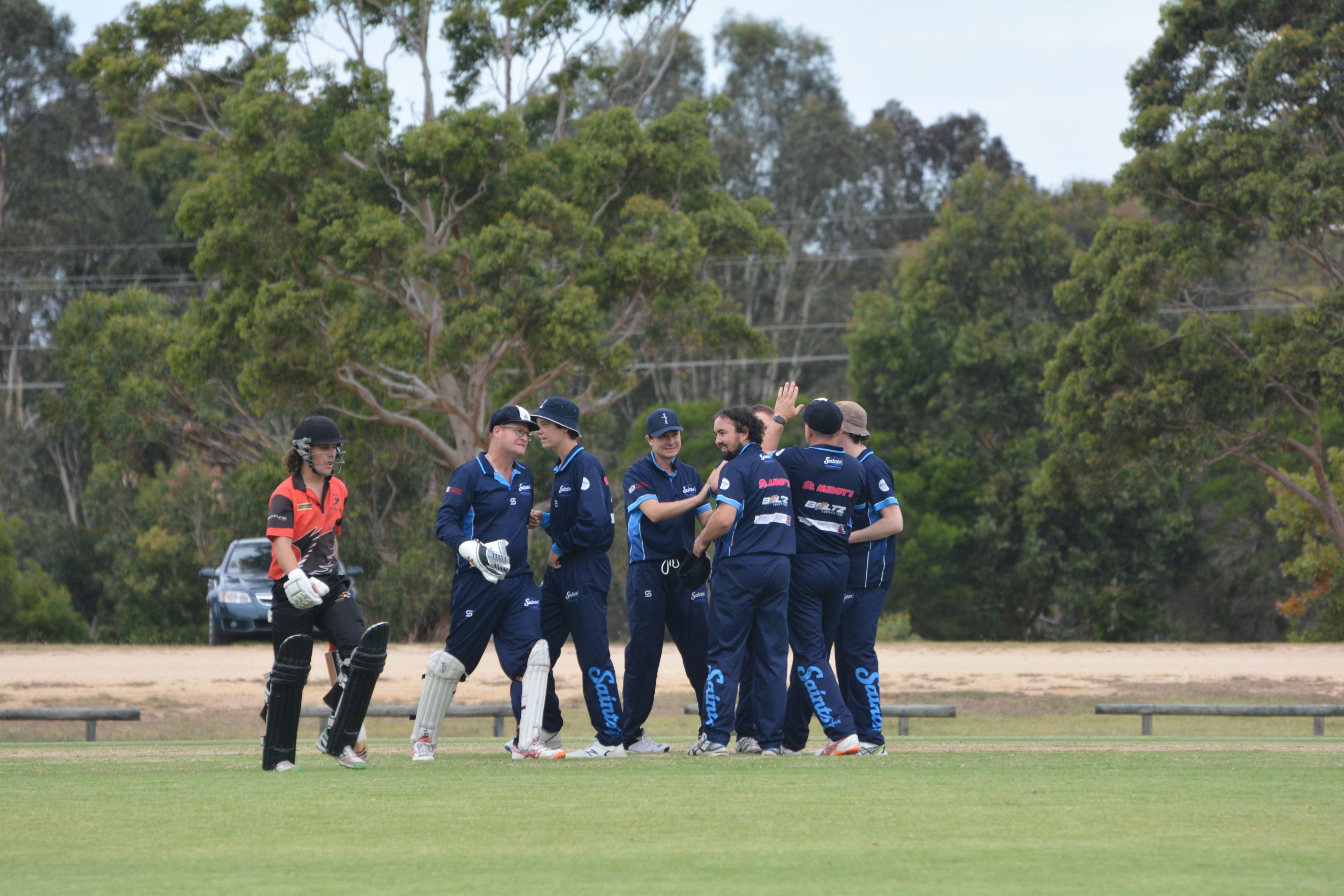 SIX teams remain in the hunt to qualify for the Sale-Maffra cricket finals, with one round to play.

While all teams currently in the top four could, in theory, miss the finals, Stratford’s strong net run rate should protect it if the Redbacks suffer a big loss to Sale this weekend.

On Saturday, the Redbacks moved to the top of the ladder on net run rate after defeating Collegians, and previous leader Maffra lost at home to Boisdale-Briagolong.

The Saints jumped into third place on the ladder with their victory, ahead on the net run rate of Collegians and Sale, who are fourth and fifth respectively.

Sixth-placed Bundalaguah kept its finals hopes alive with victory over Sale, closing the gap to the top four to one win.

The Saints scored 9-147 from their 40 overs, with Todd Mann making 43 at the top of the order and captain Dylan Bolton 31.

Finishing with 5-40 from eight overs, Mitch Bennett claimed the eighth and ninth wickets of the innings with consecutive deliveries. With the visitors 9-120, the Eagles were looking a below-par chase, however Liam Hurst added valuable runs.

Hurst was unbeaten on 30 (from 19 balls) to give the Saints a competitive total to defend.

After a promising start to the Maffra chase, Daniel Bedggood was dismissed for 25 (from 18 balls).

From 1-43 in the 14th over, the Eagles fell to 5-58 by the 24th, with Bolton claiming two of the wickets to fall and Jonny Lash the first of his four for the day.

Lee Hopkins and Ben Sly tried to get the chase re-started, but Sly was bowled by Bolton for 12 with the score on 78.

Wickets then fell at regular intervals, with Hopkins bowled by Lash for 23. The innings was over next ball, with the Eagles all out for 109.

Lash finished with 4-19 and Bolton capped a good all-round contribution by taking 3-18.

Maffra needs to defeat Longford this Saturday to ensure a finals berth.

STRATFORD was too good for Collegians at home.

The Redbacks scored 7-192 before bowling College out for 148.

Andrew Tatterson scored 39 for the Redbacks at the top of the order before Jack Tatterson provided the backbone for the innings, scoring 66. Bohdi Walker contributed 19 runs from as many balls.

Noah and Zac Hurley claimed two wickets each for Collegians.

The visitors were unable to get the solid partnership early in their innings.

Jayden Allison and Noah Hurley combined for a 61-run sixth wicket partnership, which ended when Allison was bowled by Walker for 41. When Hurley was run-out in the next over for 34, Collegians was 7-134 with six overs to bat and an uphill battle to win.

Walker, Lachlan Channing and Simon Williams, in his 300th first grade game for the Redbacks, each claimed two wickets.

The result left Collegians only staying in the top four ahead of Sale because of a better net run rate, with a vital match against Boisdale-Briagolong this weekend.

BUNDALAGUAH boosted its net run rate with victory over Sale.

After the visiting Swans made 8-146, the Bulls chased down the target with 55 balls and six wickets to spare.

Hayden Glover and Rohan Blandford combined for a 54-run second wicket stand for the Swans.

Blandford was caught off Sam Bedggood’s bowling for 35 before Jake Wynd claimed Ben Jones’ wicket without adding to the score.

Wynd finished with 3-24 from his eight overs.

With the Bulls 2-79, Steve Spoljaric and Wynd added 30 before Wynd was dismissed for 24. Spoljaric (32 not out) and Kyle O’Reilly (13) took the Bulls towards victory with their 34-run partnership.

Both sides now must win this Saturday to make the finals.

Bundalaguah must defeat Rosedale-Kilmany and hope the result of two other matches goes in its favour, while the Swans can advance with victory over Stratford.

ROSEDALE-KILMANY won the battle of the bottom two sides, defeating Longford at home.

Sent in to bat first, the Lizards scored 9-147 before the Warriors won in their 39th over with five wickets in hand.

Adam (48) and Rohan (33) Diamond gave the RK chase momentum with their second wicket partnership of 52. The remainder of the batting order did enough to see their side to victory.