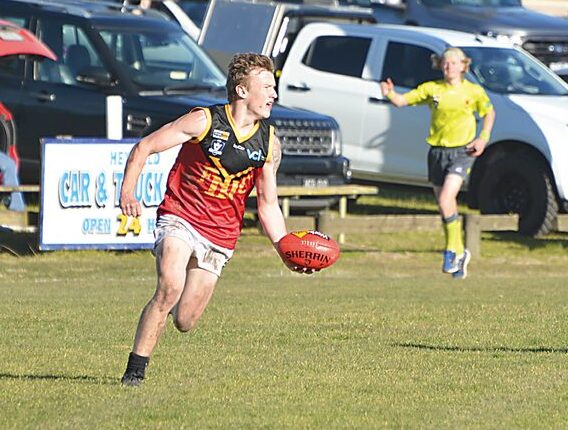 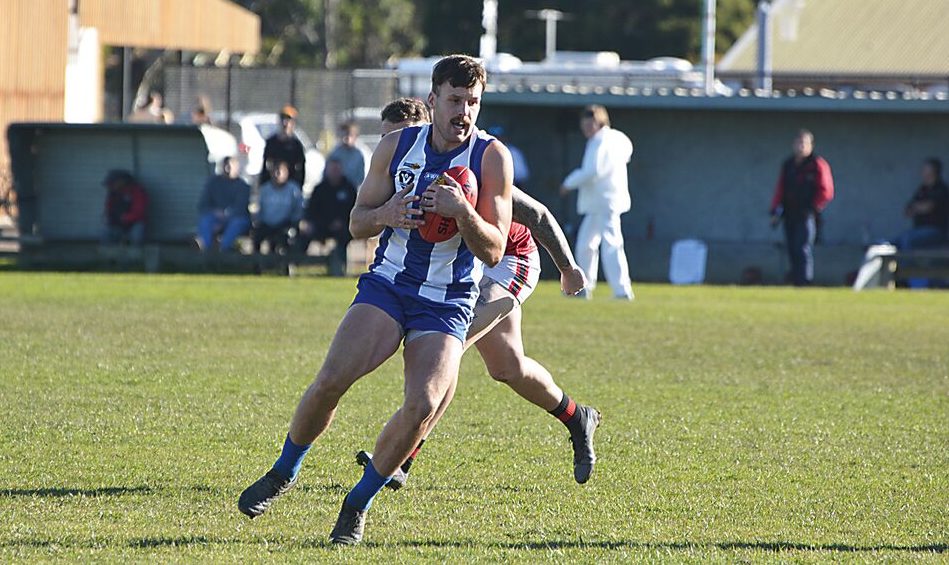 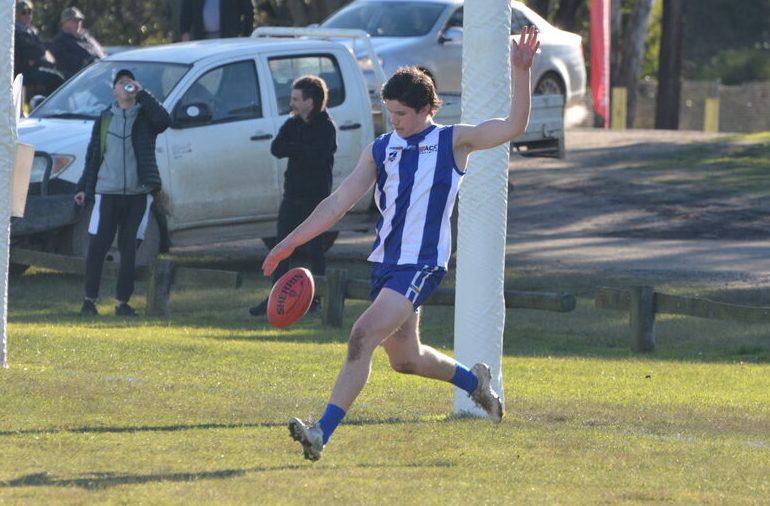 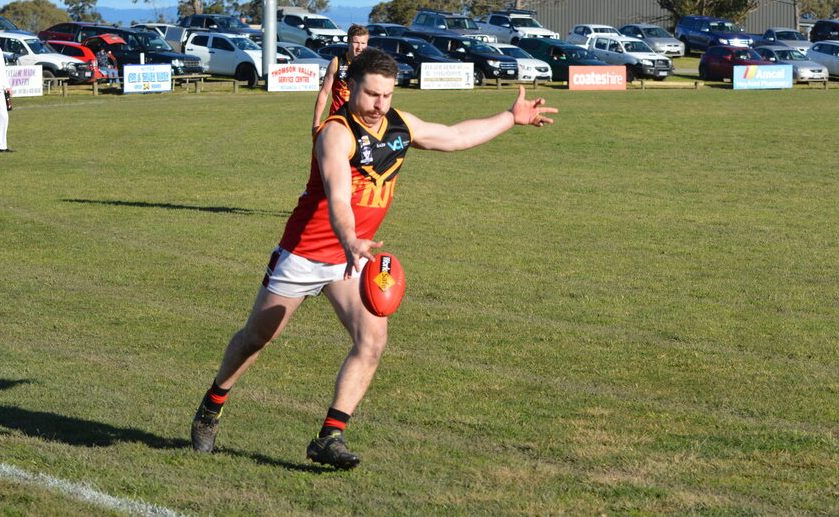 YALLOURN-Yallourn North celebrated its new life as the Jets with what turned out to be a commanding 74-point at Heyfield to remain on top of the North Gippsland football ladder.
The Jets couldn’t get off the runway at the Gordon Street Recreation Reserve in the first quarter, but once the pilots refuelled at the first break, there was no stopping them, winning 20.16 (136) to 9.8 (62).
Heyfield kicked the first six goals of the game and kept YYN to a single behind in the opening term to take a 37-point lead. What happened next however defied logic, as the Jets kicked 11 goals in the second quarter to well and truly leave the Kangaroos mystified.
YYN continued on its way in the third, stretching the margin to 39 points at three-quarter-time, and then doing more of the same in the last, as it ended with a comprehensive 74-point win.
Heyfield added just three goals after quarter time, all of which were kicked in separate terms.
Brayden Woodland, Shaun Humphreys and Max Van Der Zwart battled hard in a losing cause.
Kangaroos coach Rick Galea will have plenty on his plate in trying to rectify his sides dramatic nosedive in form.
Heyfield began the season with four wins on the trot, but has not won a game since, meaning it has been nine weeks between drinks.
The Jets had nine individual goal kickers in their victory, with Dean MacDonald and Josh Keyhoe nabbing five and four respectively.
Jai Massese had plenty of touches and took out best on ground honours, while two names that could be worked into a rap also played well in Campbell Staff and Dylan Bath.

TRARALGON-TYERS United got the job done against Sale City.
After an even first half, the Bombers broke away to win at Stephenson Park, 12.10 (82) to 6.5 (41).
Just three points was the margin at half-time, but seven goals to one took TTU out to a 40-point lead with one term to play.
From there, the Bombers were able to get through the last quarter and win by virtually the same margin as 30 minutes prior.
Brad Kelleher kicked four goals for the winners to take his season total to 33 from eight games.
Others to play well for TTU were Ricky Cochrane, Jack Brown, Jacob Albanese, Zac Kilgower, Kade Duncan and left footer Tom Fleming.
Best for Sale City was Bohdi Walker, Jaxsyn Whitehill, Ryan Thatcher, Tom Bowman, Justin McLay and coach Shane Fyfe.
ROSEDALE did what it needed to do against Glengarry.
As one of a number of teams in the middle part of the ladder, the Blues needed to give their percentage a boost in this match, and they did so with a 119-point shellacking of the Magpies.
Rosedale put up 27.10 (172) to 7.11 (53), with pocket rocket Brandon McDonald kicking nine goals.
McDonald has now kicked 41 goals for the season, and funnily enough, is only one behind the leader who shares the same surname but with different spelling.
The Blues led from start to finish against Glengarry, and by three quarter time the margin was as good as three figures.
Rosedale favourite son Rohan Diamond had the ball on a string, and received good support from Brad McKay and Dale Fleming.
Jackson Hall was again best for Glengarry. Dean Brooks and Alex Bermingham put in honest efforts.
WOODSIDE proved it is the real deal in 2021, walking all over third-placed Churchill after
quarter-time to win 18.11 (119) to 8.8 (56).
The Cougars dominated early and had 17 more inside 50s in the first term, but Woodside turned it around, kicking five goals to two in the second to go into the main break with a
16-point lead.
The Wildcats owned the third term, piling on seven goals to one as the margin got out to a 58 points by three-quarter-time.
It was a mere formality in the fourth, with Woodside running out the game with the four
premiership points docked in the Wildcats’ keeping.
The 64-point margin was the Cougars’ biggest defeat since round two, 2017, when they lost to Sale City by 68.
David Waddell kicked four goals for the winners, while Jordy Cameron, Josh Kennedy
and Ryan Foat were prominent.
Chris Williams played well for Churchill, as did Nick Celima and Corey Nickels who kicked
four goals.
COWWARR got its first win of season 2021 on the board.
The Saints defeated Gormandale on their home deck 13.10 (88) to 7.6 (48).
With both teams going into the game without a win and out of finals contention, this match was virtually a grand final for the combatants.
Scores were level at quarter-time, before Cowwarr kicked eight goals to two in the second
term to take a 38-point lead at half-time.
Gormandale did its best to get back into the game, and outscored the Saints in the third, but still trailed by 33 points at the final change. This margin proved to be enough for Cowwarr in the finish, as it rounded out the match to win by 40 points.
Pat Tainsh was in the thick of the action for the Saints, as was Sean Alexander, Jack Casson
and Lucas Jenkinson.
Better players for the Tigers were Mitchell Jones, Mitchell Harris, Tyler Atlee, David Purves and Josh Pearce.
YARRAM had the bye.