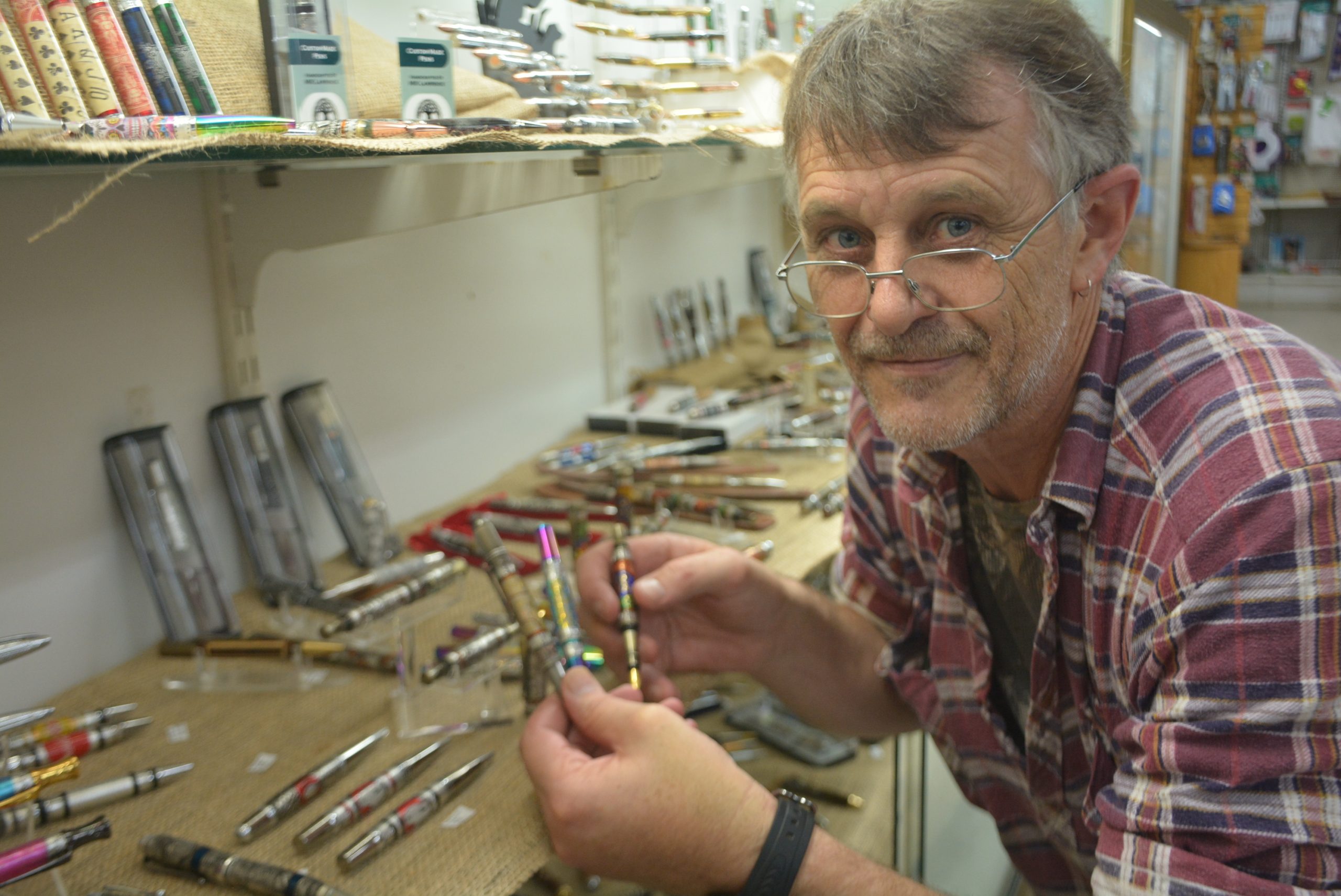 DOZENS of messages of appreciation have overwhelmed the humble wood turners of Gippsland Woodcraft Group, who sent 300 handmade pens to Australian troops overseas in March.

Group president Graeme Turner said the notes of gratitude were touching recognition that service members appreciated the connection to “back home” and were reminded that they were not forgotten.

Gippsland Woodcraft Group is one of many woodwork groups around the country that supports the ‘Pens For Troops’ program.

The wood workers turn the pens on a lathe using Australian timbers and acrylics, or like Sale’s pen artist Mik Lawrence does, 303 shells.

The pens are then sent to troops overseas and distributed by the Defence Force.

Mr Turner said last year in March, 250 pens were sent and a goal of 500 was set for Remembrance Day, but that number was easily exceeded.

This year 2300 pens were sent, including the 300 made by the Gippsland Woodcraft Group.

Each pen comes with a crafted note with a field of poppies image, detailing the creator’s name, materials it was made from and an email address of the woodcraft group that sent it.

“It’s amazing how touched the troops are with such a simple gesture, with one pastor writing back to say what a boost it gave to morale knowing they were being thought of,” Mr Turner said.

“Another guy who received a pen made from Queensland maple wrote to us and said he grew up in the town in Queensland where that particular wood came from,” he said.

“It really lifted his spirits.”

A message of thanks from a trooper who received a pen made from Tasmanian timber noted that the Apple Isle was his favourite place, and he planned to go there when he finished his tour of duty in November.

“Another guy said he loved the pens so much he planned to keep his to pass onto his children,” Mr Turner said.

When an Anzac Day barbecue for one group overseas went pear-shaped and their meat didn’t turn up, Mr Turner said a surprise gift box of pens was some consolation.

“The troops were really disappointed they couldn’t have their barbecue, but then the pens arrived and really brightened their mood,” he said.

The Gippsland group has been particularly surprised and moved by the messages from service men and women who have a connection to Gippsland.

Mr Lawrence, who coordinates the pen program, said one female trooper whose husband and children were back home, sent a lovely note telling the group her mother was from Yarram, and so she felt a special connection to Gippsland, and the pen was a memento that she would hold dear.

“Another message of thanks came from a guy who had actually flown over Gippsland from the East Sale RAAF Base to fight the fires at Christmas time,” he said.

Mr Lawrence is now working on finishing 100 or so pens for Remembrance Day, using the timber from the original Briagolong home of the Whitelaw family, who lost five of the six sons who fought in World War 1.

“It’s really nice to hear that the pens help to lift the morale of the troops, who are dealing with difficult situations – and now have the worry of COVID-19 and the safety of their families back home,” he said.

People can support the task by donating $5, which covers a pen kit and materials. The donor of the kit is listed on the card that goes with the pens.