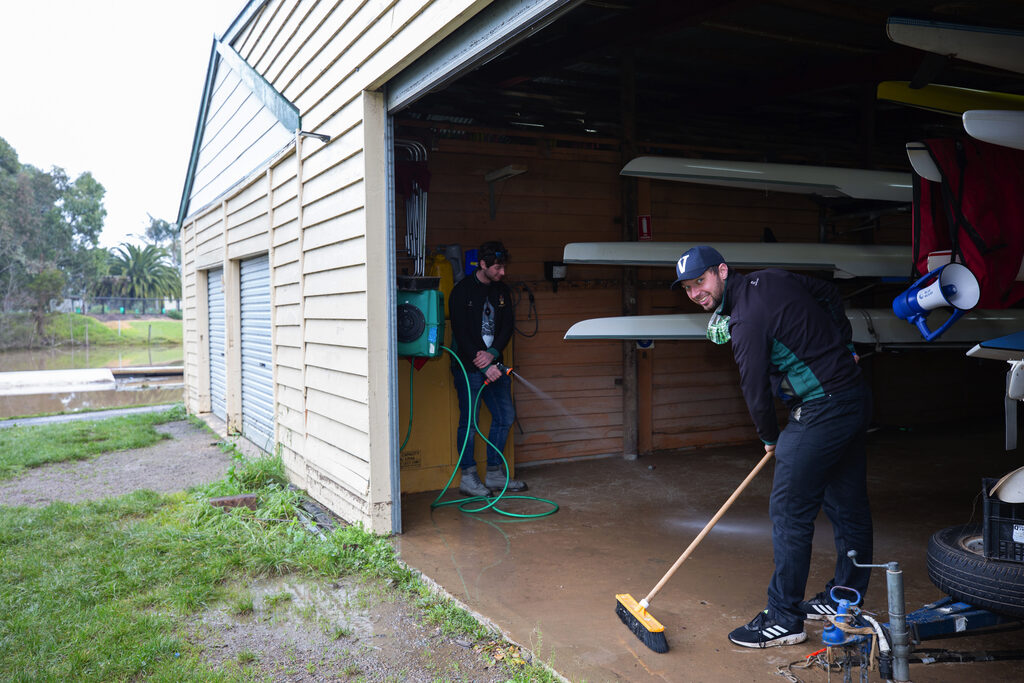 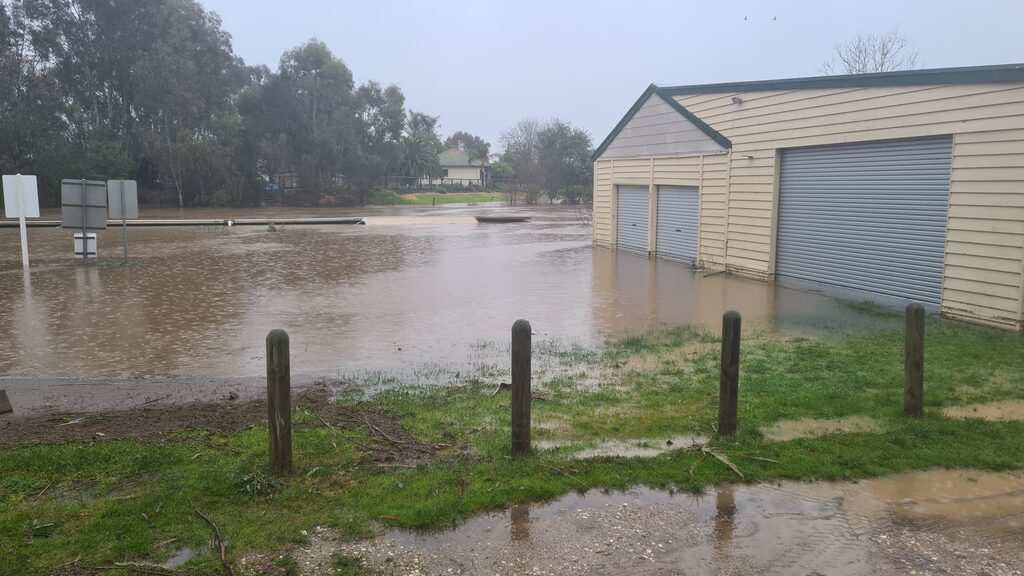 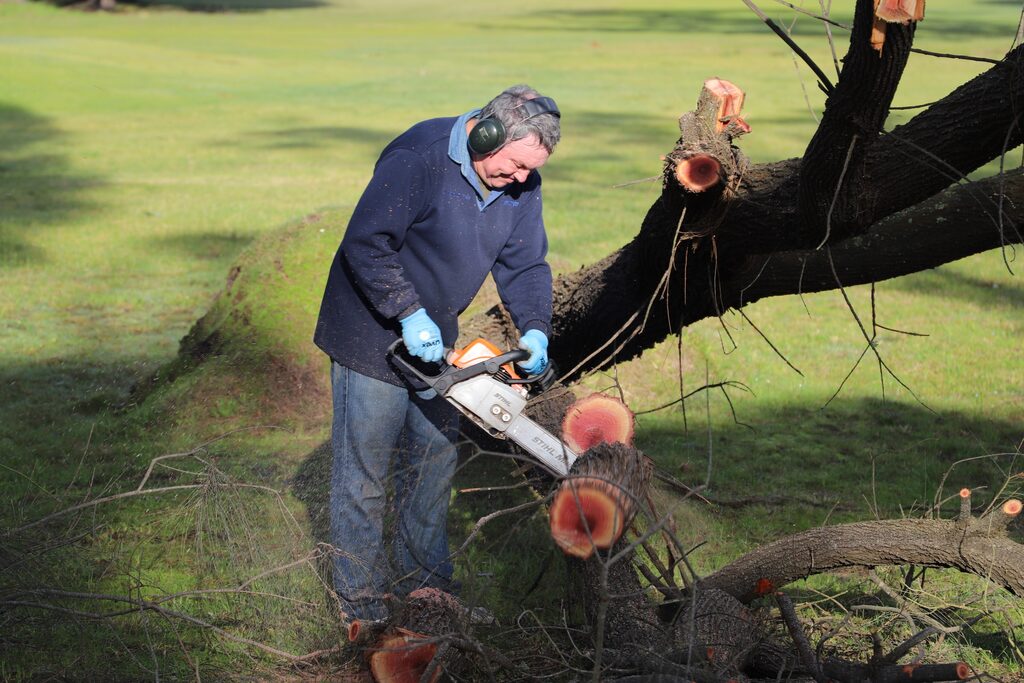 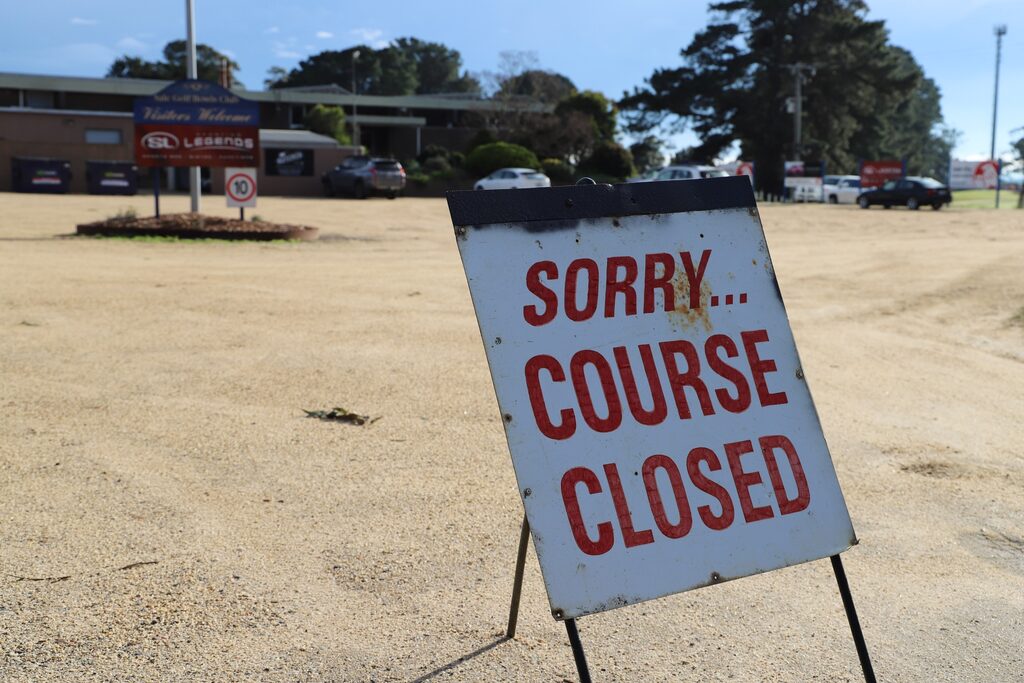 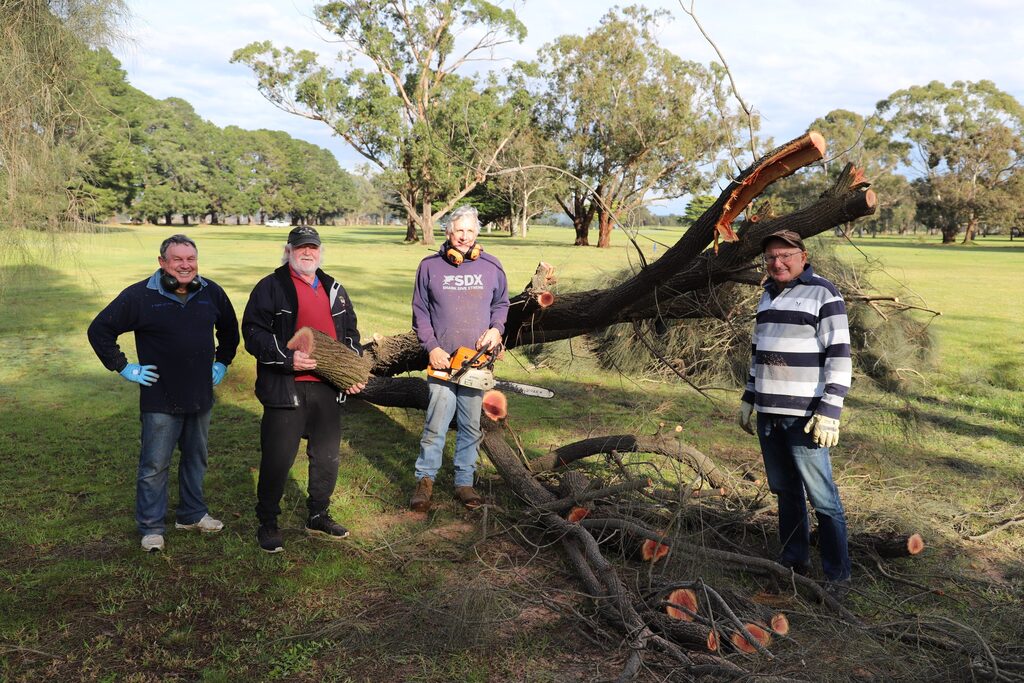 THE clean-up continues across Wellington Shire following last week’s storm, as local volunteers rolled up their sleeves and mopped up the aftermath of floodwaters and destructive winds this week.
Post-flood working bees are just part and parcel of having clubrooms on a floodplain, and Sale and District Aeromodellers Club members are no strangers to them.
The group was at its Desailly’s Flat facility in Sale on Tuesday morning, after floodwaters swept through the clubrooms, pits and storage area on Friday night.
A few hours prior, members Bob Bennetts, Stephen Green and Graham Duck were on site to make preparations, but said they did not quite expect the water to enter the buildings.
The water peaked at Sale wharf at 3.45 metres at 10pm on Friday night, submerging the club’s field and surrounding roads, and coating the club’s structures in more than a 30cm of mud.
On Tuesday, members were happy to discover no major damage — other than a soggy lawnmower.
They spent the morning removing everything from storage for a good hose down, and burning rubbish that had floated across the field’s boundary.
The club’s treasurer, Stephen Green, reported preparation was key in avoiding damage, and it was something the club was well versed in after experiencing numerous floods.
“We came in and lifted up some stuff, but it did catch us out and got a bit deeper than anticipated,” he said.
“We were hopeful this time it wouldn’t quite get into our clubrooms, but it came up to about halfway up our heater.
“We make sure we don’t leave stuff here that’s subject to damage — we do know it’s flood prone, so we take care in what things we do leave.
“We’ve been pretty fortunate in the scheme of things.”
Mr Green remarked the largest flood the club had ever witnessed was past head height, so the club had been relatively lucky this time.
While there was some panic that a new, donated generator from member Graeme Jackson, which was left in an unassuming unmarked box, didn’t quite escape the wrath of the floodwaters, but club members soon had it ticking.
Mr Jackson said amongst the members there was a wide cross section of trade expertise and talent.
“We’ve had three geniuses working on that generator this morning — we’re extremely lucky,” he said.
A call to arms on Friday afternoon also prevented major damage at Gippsland Grammar’s rowing sheds, which are only metres away from a swollen Flooding Creek.
The school’s director of rowing, Nick Bartlett, said about 25 people descended on the sheds on Friday afternoon to lift the equipment off the shed’s floor.
“We’d been watching the water levels for a couple of days — watching it come up — and on Friday afternoon, we thought it was time to move boats and equipment,” he said.
“We put an email out to the school for volunteers, and loads of kids and staff and teachers came down to help, which was wonderful.”
Mr Bartlett said it was particularly heartening to see so many people lend a hand, considering it was a learn from home day for students.
“[The carpark] was full of cars, and everyone was scurrying around like ants … it speaks a lot about the community we have around the rowing program,” he said.
While flooding was an annual occurrence in his home town in the United Kingdom the flood was Mr Bartlett’s first on Australian soil.
“We’ve got a picture in the shed from 1993 of a big flood, so I knew it could happen, so it was a case of ‘when’ rather than ‘if’ — I was definitely expecting a flood at some point during my time here,” he said.
“It was millimetres off the carpet in the gym, so we were really lucky.”
Mr Bartlett hoped with a bit of elbow grease from himself and rowing coach Harry Roach, the shed’s boat storage area would be good as new in no time.
While Punt Lane passers-by may find the rowing pontoon’s current 45-degree angle somewhat amusing, it is hoped it assumes a more horizontal position before the school’s rowing program ramps up after the school holidays.
There are a few more water hazards on the course than usual, but Sale Golf Club’s primary concern was damage caused by the storm’s howling winds.
As a deluge soaked the ground, trees began to topple as they bore the brunt of last Wednesday night’s winds.
Uprooted trees, debris littering the fairways and waterlogged bunkers have now closed the course for more than a week.
About 30 golf-deprived members were onsite on Wednesday, doing their best to clear the debris so they can get out for a round — although all signs pointed to another golf-less week.
Club president Rob Horner said while the rain made it impossible to drive on the course, it was mainly the debris and leaves causing a headache for those cleaning up.
“We’re gradually going through and cleaning up today, and back again next week — hopefully we don’t get any rain on Friday [today],” he said.
“Even though we’ve got about 30 people out here helping, we can only do so much in so much time.”
Mr Horner said it was the worst he’d ever seen the course.
“There’s been water on the course that we’ve never seen before,” he said.
“We couldn’t really get an accurate gauge on how much water got in the rain gauge, because it was coming in sideways.
“We did register about 85mm overnight, and that was just enough to really destroy the place.
“There’s a couple other trees that have had the wind hit them hard, and they had a bit of rot in them, so they’ve come down really easy.”
Mr Horner thanked all those members who were volunteering their time, and hoped they could all return to the game they loved soon.