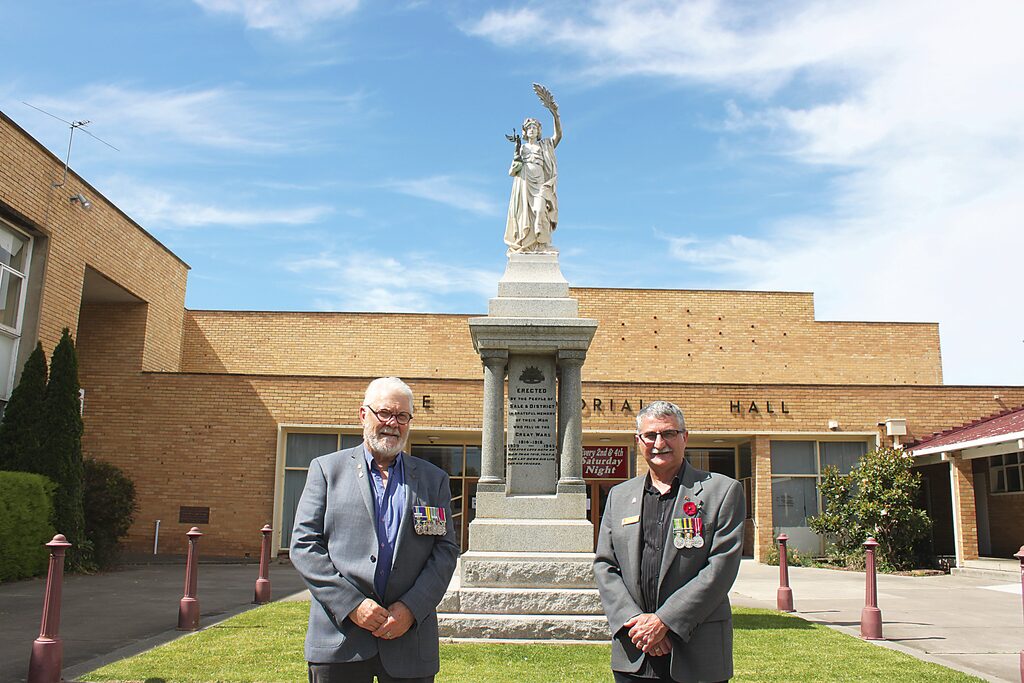 EAGLE-eyed residents may have noticed the Sale Cenotaph in Macalister St was recently roped off with tape.
Members of the Sale Returned and Services League blocked off the cenotaph to protect it from damage that may occur during events held at Sale Memorial Hall.
The group is exasperated at people sitting on the monument, climbing on it, and in some cases, damaging the statue atop.
The word cenotaph comes from the Greek language and means “empty tomb”, and RSL president Marty Tanzer explained the cenotaph was a place of remembrance for residents of Sale who were lost during war.
Mr Tanzer and RSL member Ross Jackson are frustrated at people disrespecting the monument.
“It should be treated like any grave you see at a cemetery,” Mr Jackson said.
“When you look at it deeply, all of these people had families from Sale and surrounds, and many still live in the region,” he said.
The memorial has 138 names of men and women who were lost during the two world wars, and was built in 1924 by the residents of Sale at a cost of 900 pounds — about $73,000 dollars in today’s money.
The cenotaph was then handed over to the Borough of Sale to be cared for, but when Wellington Shire was created in 1994 the RSL had to assume control as it was no longer being cared for, according to Mr Jackson.
The monument will turn 100 years old in two years’ time, and the RSL wants to better protect it from potential damage from vandals so that it will survive for decades to come.
“We are looking at getting a fence, but we need to find the money,” Mr Tanzer said.
The RSL will apply for a grant to install a fence that matches the period when the cenotaph was built.
“It is a little disappointing that we have to — but it is necessary,” Mr Jackson said.
The Sale Cenotaph has faced a number of challenges during the past 20 years, and needs regular repairs.
An arm was broken off the statue after a ball hit it when young men were kicking a football nearby.
The RSL had to order a new arm from Italy made of Carrara marble at a cost of $6000, which was paid for by club members.
The statue is designed to be a symbol of celebration of those who served.
The woman is holding a statue of Nike, the goddess of victory, to depict the victories in World War 1 and 2.
Sale RSL wants people who use the memorial hall to understand the significance of the monument to not just the RSL, but the wider community.
Mr Jackson said that often people sat on the steps at the bottom after events at the memorial hall, but once he explained the importance of the site they were generally extremely remorseful and moved immediately.
“People often just don’t understand how important this is for the community,” he said.
Mr Jackson believes the Sale Cenotaph is quite special, and has only seen one other like it in Victoria.
The RSL hopes residents can understand that the cenotaph is not just for RSL members and those have served, but is for the whole community to reflect on and remember the sacrifices that have been made.